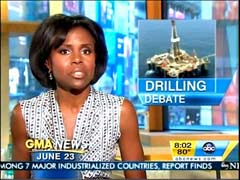 All three network news shows on Tuesday skipped a report that eight of 15 experts consulted by the Obama administration opposed the government's plan to halt deepwater oil drilling for six months. Only Special Report With Bret Baier covered the story.

FNC reporter James Rosen noted a federal judge's decision to overturn the plan: "The judge also rebuked the Obama administration for filing a quote 'misleading misrepresentation' in the case by suggesting an expert panel supported the moratorium when a majority of its members do not."

ABC's World News, CBS's Evening News and NBC's Nightly News (as well as Good Morning America, Early Show and Today) all highlighted the ruling, but none of them mentioned the opposition from a majority of the panel.

"A group of those named in the Secretary of Interior’s Report, 'Increased Safety Measures for Energy Development on the Outer Continental Shelf,' dated May 27, 2010 are concerned that our names are connected with the moratorium as proposed in the executive summary of that report," the experts said in their letter.

"There is an implication that we have somehow agreed to or ‘peer reviewed’ the main recommendation of that report," the eight experts wrote. "This is not the case."

They added that "the scope of the moratorium on drilling which is in the executive summary differs in important ways from the recommendation in the draft which we reviewed."