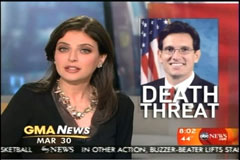 CBS's Early Show and NBC's Today on Tuesday ignored the arrest of a man who was plotting to kill Republican Congressman Eric Cantor. ABC's Good Morning America mentioned the story only in a news brief in the 8am hour. Last week, however, GMA highlighted threats against Democrats and worried about "angry talk" from Sarah Palin.

The Early Show may have ignored the story of Norman Leboon and the violent, profanity-laced rants he posted online about the "evil" Cantor, but the same show on Tuesday did note the guilty plea of a man who threatened Barack Obama.

GMA, the only morning program to cover the Leboon story, didn't mention that the Philadelphia man also donated to Barack Obama in 2008.

In comparison, last Thursday, the Early Show fretted that the GOP was using "violent rhetoric and imagery."

According to the MRC's Brent Baker, it was ABC and CBS who skipped the arrest of Leboon on Monday night's news programs. NBC's Nightly News only noted the story in an anchor brief.

A transcript of the March 30 news brief on GMA, which aired at 8:02am EDT, follows:

BIANNA GOLODRYGA: Meantime, a Philadelphia man is in custody for threatening to kill Congressman Eric Cantor, the House Minority Whip. In a profanity-laced video rant, Norman Leboon called Cantor pure evil. And said that he would, quote, "receive my bullets in your office." A bullet was fired at Cantor's campaign office last week but police do not believe it's linked to Leboon.