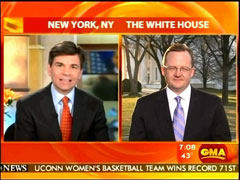 ABC's George Stephanopoulos on Tuesday showed little interest in grilling Robert Gibbs over serious allegations made by a Democratic Congressman. Talking to the White House press secretary, the Good Morning America host could only manage a single question: "[Representative Massa has] made very specific and pointed charges against Rahm Emanuel, Democratic leaders in the House. What's the White House response?"

And that was it. Stephanopoulos simply moved on to health care. He didn't ask about allegations that a naked Emanuel once approached Massa in the shower of the House gym and screamed at him. Further, wondering about "the White House response" is a very weak question. How about, "Are the charges true?" or "Did the White House pressure Massa to resign?"

Later in the piece, the GMA anchor asked if President Obama would be "willing to negotiate new language" with Congressman Bart Stupak over the issue of abortion and the health care bill. When Gibbs asserted, "This is not a bill about abortion," Stephanopoulos again offered no challenge. He simply accepted the declaration and moved on.

To be fair to ABC, reporter Jonathan Karl did highlight Massa's complaints against Emanuel and the allegations of intimidation in the House shower. But Stephanopoulos, given his close friendship with high profile Democrats such as Emanuel and James Carville, is a walking conflict of interest.

On the Bottom Line blog on ABCNews.com, Stephanopoulos managed to completely skip any mention of Emanuel. If a chief of staff in a Republican White House was accused of having a naked shower confrontation, it seems safe to say that the GMA host would have more interest.

A transcript of the March 9 segment, which aired at 7:07am EST, follows:

GEORGE STEPHANOPOULOS: Let's bring in Robert Gibbs now from the White House. Now, Robert, the resignation may take effect this morning. But Massa's going on Glenn Beck this afternoon. Was all over Rush Limbaugh yesterday afternoon. On Larry King Live tonight. We expect to hear a lot more about how he was pushed out because of his vote on health care. He's made very specific and pointed charges against Rahm Emanuel, Democratic leaders in the House. What's the White House response?

ROBERT GIBBS: Well, look, I think this whole story is ridiculous. I think the latest excuse is silly and ridiculous. George, let's go through from what we've heard from Congressman Massa. Last week, on Wednesday, he was having a recurrence of cancer. On Thursday, he was guilty of using salty language. On Friday, we learned he's before the Ethics Committee to be investigated on charges of sexual harassment. So, look, I think, clearly, his actions appear to be in the appropriate venue of the Ethics Committee to look at. But we're focused not on crazy allegation, but instead on making this system work for the American people, rather than work for insurance companies, George.

STEPHANOPOULOS: Let's talk about that. The President was fired up yesterday. He took aim at the insurance companies. He also took aim at Democrats worried about the election in November. But, a lot of Democrats think this could cost Democrats' control of the House. They're joined by independent analysts like Charlie Cook, partisans like Karl Rove. Is losing control of the House a price worth paying to get health care?

GIBBS: Well, look, George, as the President said yesterday, we need a system, as I said, that works for the American people, not for insurance companies. How much longer are we going to wait while insurance company rates go through the roof to get something done? I think the President understands that good policy always makes for, ultimately, good politics. His focus is on getting something done so that we can make sure that small businesses and families aren't struggling with the high cost of health insurance that goes up each and every year. He's going to lead this fight, George, to get this done over the next couple of weeks. And it will be something that Democrats can be proud to run on in November.

STEPHANOPOULOS: So, it won't cost them the House? And if it does, so be it?

GIBBS: I don't think it's going to cost Democrats the House. I think this will be an accomplishment that members can be proud of, not just in this election, George, but for decades to come. We'll have finally done something on health insurance reform that means something real to American families, to small business owners that are struggling with those high costs. That's what's important to the American people. We were sent here to do something.

STEPHANOPOULOS: You know, Congressman Bart Stupak, on the program last week, said he was ready to bring down the bill if the health care bill if the President didn't change the abortion language. Now, he's more optimistic, telling the AP he can work out a deal. Is the President willing to negotiate new language on abortion?

GIBBS: Well, look, this President is willing to keep the promise that we made throughout this. This is not a bill about abortion. This is about health care reform. I think there's no doubt that we can come to a solution that maintains the rules that are in place, that federal funds aren't used for abortions, while protecting a woman's right to choose.

STEPHANOPOULOS: Finally, we're just about out of time. But there's been a flurry of stories lately about White House infighting, tension between the President, his chief of staff, other senior aides. What does the President think about these stories? And does he have confidence in his chief of staff and his senior team?

GIBBS: The President has confidence in each and every person that works here, George. We're privileged to serve the American people from the White House. The President is not focused on palace intrigue. It says something about this town that this goes for entertainment. He wants us to focus on getting something done for the American people, getting health care reform though the Congress, focusing on the economy and getting jobs coming back here to this country.