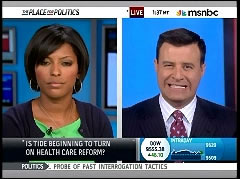 MSNBC News Live hosts David Shuster and Tamron Hall on Tuesday embraced a contrarian notion that the tide is shifting in favor of liberal health care reform. Interviewing a Democratic strategist-turned-left-wing columnist, whose political affiliations went unidentified, Shuster tried to be optimistic: "...If the anti, sort-of, reform crowd on the right owned the early part of August, you almost get the sense that things are starting to pick up on the left, as far as the last couple of weeks in this month."

Shuster talked to David Sirota, whom he identified simply as a "syndicated columnist." The cable anchor left out the fact that Sirota is a former Democratic/far-left operative who previously worked for, among others, socialist Vermont Senator Bernie Sanders. One MSNBC graphic hopefully speculated that the country may be seeing a health care "momentum shift." Another touted, "Is Tide Beginning to Turn on Health Care Reform?"

A more reality-based analysis shows that public opinion has dramatically shifted against the President’s plan. MSNBC’s own August 18 poll found that only 41 percent of Americans approve of Obama’s handling of the issue. 47 percent disapprove.

MSNBC’s Hall appeared to view these opinions as examples of inaccurate GOP spin on health care. Citing a new University of Indiana poll that found that Americans believe the President’s plan will be too costly, she opined, "...It appears the public is still not getting accurate information about the public option and other possible health care reforms. A brand new poll out just today says a majority of Americans still believes some of what the White House has labeled myths about reform." So, something is a myth because the White House calls it so?

A transcript of the August 25 segment, which aired at 3:31pm EDT, follows:

TAMRON HALL: But, the big picture right now, of course, is health care reform, the focus of that town hall with Senator McCain. And Democrats are planning about 1,000 rallies between now and Labor Day when Congress returns from August recess. And former- reform supporters want lawmakers to see that Americans still support an overhaul of this system. And starting tomorrow, a Health Insurance Reform Now bus will actually travel across the country, holding events in 11 different cities. The cities, Phoenix, Albuquerque, Denver, Des Moines, Pittsburgh, Raleigh, Charlotte, Milwaukee, St. Louis, Indianapolis and Columbus. Quite a mix there. Plus the public option is now getting support from centrist Senator Max Baucus, Democrat from Montana, and a member of the so-called "Gang of Six," that, of course, being the group of senators negotiating health care reform. But, David, it appears the public is still not getting accurate information about the public option and other possible health care reforms. A brand new poll out just today says a majority of Americans still believes some of what the White House has labeled myths about reform. Indiana University's Center for Health Policy and Professionalism research found 51 percent says that public option health care will increase costs instead of lowering them. And because of the difficulties in this battle over health care, Democratic Senator Russ Feingold says there- there probably won’t be a bill before the end of the year, perhaps not at all.

DAVID SHUSTER: And Tamron, now the bigger picture, despite the pessimism from Democrats like Feingold, is momentum for progressive health care reform starting to pick up, at least in the west and mountain states. As Tamron just mentioned, Max Baucus spoke about the support- his support for the public option in a conference call with Montana Democrats. That was intriguing. And now the Denver Post, one of the largest papers in the mountain region, is calling for a public option, saying it's the only real way to bring about real reform. Quote, "It's the best way to slow escalating health care costs and expand access to quality care. The country ultimately will lose if the public option vanishes because of the Democratic efforts effort to make health care a bipartisan effort." David Sirota is a syndicated columnist and author of The Uprising. He joins us from Denver. And, David, what was the impact of that newspaper endorsement and what’s going on with Max Baucus?

DAVID SIROTA (Syndicated columnist): Well, I think we'll feel the impact of that editorial. We have got a lot of congressional elections here that are going to be contested. Congressman John Salazar is up for a tough election. Congresswoman Becky Markey up for a tough election and I think you're going to see the Denver Post editorial piece is really going to impact that debate. Both of those members have said that they conceptually support a public option. But you never know what's going to happen in the negotiation. As it relates to Max Baucus, look, I think it’s pretty obvious what’s happening. A new poll came out showing that the Democrats in Montana, quite a small state are extremely unhappy with Baucus on the issue of health care and Baucus who had originally said in May that he strongly supports a public option, but has subsequently backed off that position, is coming back around. So, you're seeing a lot of movement there.

SHUSTER: Well, In fact, let's put up that poll. It's from the liberal blog Daily Kos. 34 percent of Montana Democrats approve of Senator Max Baucus's actions on health care. 55 percent disapprove. And, again, Max Baucus has been leading the effort to try to negotiate some sort of bipartisan compromise with Republicans despite no evidence that the Republicans are giving the Democrats anything in return. Does Max Baucus then- should we read into this, David, that he's signaling the Democrats in Montana, "If the Republicans don't come along, yes the public option will be there in what we try to get through?"

SIROTA: Well, I take a more cynical view. I think he's saying something to local folks that he's not saying to national folks and negotiators, and this is a typical Max Baucus thing. He says one thing at home and then he goes to Washington and says something else. The question will be at the end of the day, where he does go down. You know, he takes a huge amount of money from the health insurance and pharmaceutical industry. But, he’s also saying something pretty crystal clear at home. So, it really matters, actually, how much pressure is put on him at home. Montana is a very small state. Max Baucus isn't up for election- re-election for a number of years, but he is always worried about losing a Democratic primary. If he does not deliver a public option, you can bet there'll be real pressure for a real primary.

HALL: And, David, this call for a public option, is it also meant to put pressure on the White House to be stronger? We have heard back and forth of whether a public option is back on the table, if it’s negotiable, as well. So, is it beyond a message to Mr. Baucus?

SIROTA: Absolutely. I think if a main stream conservative paper like the Denver Post which is a huge regional force in this region, it is coming out, saying the public option is absolutely necessary and as you'll notice, the message was necessary to keep costs down. That's a fiscal conservative message, if that's the message coming from a moderate conservative editorial board that's very big, I think it is a message from the White House that it's got to get back on the message.

SHUSTER: David Sirota, syndicated columnist and author of The Uprising, David, thanks for the update from Denver, we appreciate it. And Tamron, you know, if the anti, sort-of, reform crowd on the right owned the early part of August, you almost get the sense that things are starting to pick up on the left, as far as the last couple of weeks in this month and that could make it very intriguing.