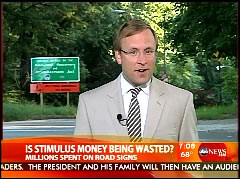 Good Morning America's Jonathan Karl on Friday provided a questioning, skeptical analysis of how stimulus money is being spent on road signs promoting the legislation. At one point, the correspondent quipped, "But for now, the signs seem easier to create than jobs." However, former Clinton aide-turned journalist George Stephanopoulos provided White House spin on the total amount of stimulus money spent.

In a follow-up segment, GMA co-host Diane Sawyer pointed out that of the $787 billion allocated in February for the legislation, only ten percent has been spent. Providing White House talking points, Stephanopoulos offered a tortured explanation for how this wasn't so: "They [the Obama administration] argue, though, that more than ten percent has actually been put to work. They would argue that about 20 to 25 percent has been put to work, because money has been obligated that allows these projects to go forward." Continuing this charitable analysis, he added, "Even though the check isn't written until the roads are actually built."

Stephanopoulos' colleague, however, offered a far more direct critique in a previous piece: "Well, six months after the stimulus was passed, less than ten percent of the money has actually been spent. And the unemployment rate is still climbing." Karl pointed out that work projects funded by the congressional legislation often feature signs touting the American Reinvestment and Recovery Act. "To some, it's a waste of taxpayer money," he summarized.

Karl wasn't done exposing waste, however. He closed by deriding, "But for now, the signs seem easier to create than jobs...But, Diane, we've recently learned of an even costlier stimulus project that is raising some eyebrows. The administration has announced it's revamping the stimulus website at a cost of $18 million."

A transcript of the July 10 segments, which began at 7:06, follows:

ROBIN ROBERTS: Now, to the economy and the debate over the $787 billion stimulus package the President signed in February. How much of the money could be put to better use? There's at least one controversial use of the money that you can see with your own eyes. Our senior congressional correspondent Jonathan Karl has more. So, it's back to Washington. Good morning, Jonathan. 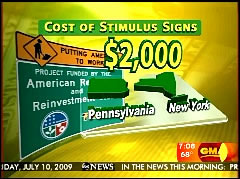 JONATHAN KARL: Good morning, Robin. Well, six months after the stimulus was passed, less than ten percent of the money has actually been spent. And the unemployment rate is still climbing. That's prompted calls from some Democrats for yet another stimulus and complaints that some of the money that's already gone out the door has been wasted. Signs of progress. Stimulus-funded road construction is under way across the country. But what about the signs? At most projects, signs tout the stimulus, with the spiffy American Reinvestment and Recovery Act logo, designed by the White House. To some, it's a waste of taxpayer money.

SEN. JUDD GREGG (R-New Hampshire): The folks who support the stimulus package, basically, this administration, want to get out there and blow their own horn with taxpayers' money.

KARL: These signs are much pricier. 500 bucks a piece in Maryland and New Hampshire. $1,700 In Georgia. $2,000 per sign in Pennsylvania and New York. And $3,000 per project in New Jersey. New York alone is spending about $1 million on signs. That's enough to fill a lot of potholes. For the price of one $2,000 sign, you could repair about 40 potholes. Transportation Secretary Ray LaHood says the signs are worth every penny.

RAY LAHOOD (Secretary of Transportation): Signs tell a story. And the story that's being hold is, hard-earned taxpayer dollars are being spent to rebuild roads, resurface roads, resurface bridges.

KARL: Some states disagree. Texas, Florida and Georgia have aid no to signs, putting the money in projects, instead. In most states, signs are made before projects are even started. New Jersey, for example, is getting $650 million in stimulus money for roads and has spent only $225,000 so far. $12,000 of that, on signs. Ultimately, the signs will represent a tiny fraction of the money spent on construction. But for now, the signs seem easier to create than jobs. All-told, several million dollars will be spent on those signs. But, Diane, we've recently learned of an even costlier stimulus project that is raising some eyebrows. The administration has announced it's revamping the stimulus website at a cost of $18 million.

DIANE SAWYER: And for the bottom line on all things politics, we're joined now by ABC News chief Washington correspondent, the anchor of This Week, George Stephanopoulos. George, good morning to you.

GEORGE STEPHANOPOULOS: Hey, Diane. I hope that sign we just put up didn't cost too much.

SAWYER: I was going to say. Let's spend the weekend, you and I, just making up some signs and see what we can get for them there. I want to return to what Jonathan was saying. You have got two things at once. You have a call for the second stimulus package. At the same time, and we put the graphic up once again, of the $787 billion, that was voted in February, less than ten percent is has been spent. Will they get a second stimulus? And what's taking so long in spending it, allocating it? 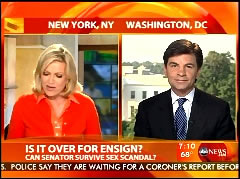 STEPHANOPOULOS: No second stimulus anytime soon, Diane. I think that's very, very clear. Economists say it's not necessary. The White House says, "Listen, we've only just begun here. And there's a lot more bang for the buck going down the road." They argue, though, that more than ten percent has actually been put to work. They would argue that about 20 to 25 percent has been put to work, because money has been obligated that allows these projects to go forward. Even though the check isn't written until the roads are actually built. Now, Republicans say this package has been wasteful and not well-targeted, which is the reason you shouldn't have a second stimulus. Even Democrats who support one make a very bottom-line analysis that the votes just aren't there right now, as Presidents Obama is trying to push on health care and energy and other issues. So, you're not going to see a second stimulus anytime soon. One caveat. If this unemployment rate continues to go up towards the end of the year, I think you could see a rifle shot extension of unemployment benefits for those who are going to be losing their unemployment benefits.

SAWYER: Yes, which would be less controversial than going for a second stimulus package. Want to turn to this other issue. The Ethics Committee may investigate Senator Ensign of Nevada. What are Republicans going to do?

STEPHANOPOULOS: They don't know. Right now, they're not saying all that much. Although, they're saying there's no evidence that Senator Ensign committed a crime. As you said, the Ethics Committee is looking at this right now. Not knowing if they're going to have a full-blown investigation. The Justice Department has a request for an investigation. The Federal Election Committee has a request for an investigation. I think the key thing to watch here, Diane, are those payments. The $96,000 from Senator Ensign's family. The $25,000 from Senator Ensign himself, to Ms. Hampton. They say they were gifts. They say they were not severance. If through the course of investigating this, it's discovered and there's evidence that these were, in fact, severance payments or hush money, then those would be in kind contributions to Senator Ensign's campaign. That would be a felony. That would put Senator Ensign in far more trouble.

SAWYER: What a story. As they say in pulp fiction, the plot thickens. Thank you, George.