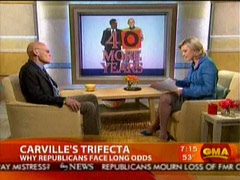 ABC's "Good Morning America," which has yet to interview talk show host Mark Levin about his New York Times best selling book on conservatism, featured James Carville on Monday to promote "40 More Years: How the Democrats Will Rule the Next Generation." Co-host Diane Sawyer recited passages from the Democratic operative's tome, "Let me read what you write here. 'Republicans shouldn't be worried. They should be in agony. They should be throwing up.'"

Sawyer continued to read from Carville's book: "Republicans had better get a better policy on prescription drugs and quickly they're going to need a lot more Prozac." An onscreen graphic highlighted past one-party rule and speculated, "Democrats 1932-1968, Republicans 1968-2008, Democrats 2008-2048?"

Sawyer, to her credit, did challenge the thesis of the book, that Democrats will be in power for decades. She skeptically noted, "But, you know, there's people looking at this who say there's a big hole in this argument. And the big hole is the deficit that is building up, the debt that is building up." The GMA co-host added, "In fact, in ten years, per person in America, $2,700 will be spent just to pay the interest on the debt. Not to pay down the debt, but just to pay the interest." Later, she wondered if Democrats are becoming overly confident.

However, Sawyer also gave Carville a free pass to trash the tea party protests that occurred in April. The former Clinton official seethed, "There were a bunch of, like, 75-year-old cranky white guys, mad at everything. It just couldn't have been a better event for the Democratic Party. I hope they come back and tea bag some more." Sawyer offered no retort or comment on Carville's broadside.

A transcript of the May 4 segment, which aired at 7:13am, follows:

DIANE SAWYER: We turn now to politics and a somewhat beleaguered group of Republicans, Jeb Bush, Mitt Romney, who spent their weekend at a Virginia pizza parlor on what they call a listening tour to try to reinvigorate the Republican Party. Someone looking on possibly with a smile at all of this is GMA contributor and Democratic political strategist James Carville who has a challenge for all the Republicans who think they can come back. It is a new book out called "40 More Years: How the Democrats Will Rule the Next Generation. " 40 more years? Let me read what you write here, "Republicans shouldn't be worried. They should be in agony. They should be throwing up. Republicans had better get a better policy on prescription drugs and quickly they're going to need a lot more Prozac."

SAWYER: 40 Years? What's your case for this?

CARVILLE: First of all, 40 years of dominance by political party at the norm. From 1896 to 1932 there was only one Democratic president. From '32 to '68 only one Republican. And we've been living in an era of almost Republican dominance, 28 years to 12 years in the last 40 and young voters are moving Democratic at an alarmingly fast rate, if you're a Republican. Every growing demographic is trending Democratic and I think we're probably on the verge of another 40-year era of party dominance here.

SAWYER: But, you know, there's people looking at this who say there's a big hole in this argument. And the big hole is the deficit that is building up, the debt that is building up. Even though the Obama administration is in crisis, it is adding constantly adding debt. In fact, in ten years, per person in America, $2,700 will be spent just to pay the interest on the debt. Not to pay down the debt, but just to pay the interest.

CARVILLE: Look, I think that the deficit is going to be a big issue but the Republicans have no credibility. Used to be when I was younger they had credibility on spending and blew all spending credibility in, in, in the early part of this decade. And, sure, they can do better if they are able to attain some of that credibility but right now people aren't just not looking to them and the way that they're talking about this is kind of irrelevant to people.

SAWYER: But, isn't it ripe for them taking back their issue?

CARVILLE: It's their best issue that these tea baggers, they turned everybody off. There were a bunch of, like, 75-year-old cranky white guys mad at everything. It just couldn't have been a better event for the Democratic Party. I hope they come back and tea bag some more. And I think that- I think that the Democrats are going to be smart enough to- when this recession is over and it will be over, to jump back on top of the spending issue like President Clinton did back in the '90s.

SAWYER: Want to talk about some of the other vulnerabilities out there. Again, it's been pointed out there's no guarantee, Arlen Specter moves over to the Democratic side, seems to give a good bloc now to block any vote against them. But strength is not always deployed effectively. Here's Jon Stewart.

JON STEWART ("Daily Show" clip) : I guess that means now, the Democrats also control the House, the executive and without Al Franken, they'll have a filibuster proof majority in the Senate. They haven't had that much power since Jimmy Carter's presidency and, man, that went great. That was a juggernaut of progress.

CARVILLE: Well, you know, Diane, I started this project long before the 2008 election. In fact, as early as may of 2000, even April we were identifying me the author of "40 More Years." Yes, I mean, is there a chance that some of this is, sort of, Democratic hubris? Of course. But, the underlying dynamics that are shaping the American electorate are sort of in place and unless there's something to do to change them this is going to be a pretty tough time for the Republican Party.

SAWYER: Let's talk about what could change them. On the Democratic side and on the Republican side. You have listed a kind of trifecta. Your own trifecta of the three dangers that the Democrats face, how they could lose it all. And hubris is the first one?

CARVILLE: Of course, it always is. And I said early on, on one of- the big problem was going to be we were going to start getting in trouble and our people would tart getting indicted. It follows power around. It always has.

SAWYER: And not controlling the spending issue. But, what can you do in this economy?

SAWYER: And ideological purity tests. Of which particular kind?

CARVILLE: With the Republicans, look, my friend Mark Shields said do you want to be in a church chasing out heretics or you want to be in a church that's trying to bring in converts? The Republicans are always- he's not a Real republican or, you know, Rush Limbaugh says that good riddance to Specter and McCain and his daughter ought to go. That's not the kind of church we want to have. When a party gets political power it tends to become arrogant and start chasing people out that it doesn't agree with. I hope we don't do that.

SAWYER: Okay, the Republican comeback advantages are, we talked about getting credibility on spending so that was your first one out there. But the second one was to recruit fresh candidates, specifically what do you think they can target and how fast?

CARVILLE: Well, I think they can target people pretty quickly and got to get the faces of the party off. They're trying to get this Eric Cantor, this young guy from Virginia and talk a lot about Paul Ryan, who's a Congressman from Wisconsin but they need to start recruiting people at the city council level, at the county level too.

SAWYER: And, quick last one, learn to use a scalpel. Got about 15 seconds.

CARVILLE: Right, they just don't have any- calling people socialists and fascists and all of that. It just turns people off to no end. Just one giant machete they have. Put it down. Get a scalpel. You'll do better.

SAWYER: Okay. Take your vitamins 'cause you have got to live 40 years to see if James Carville was right. That's the book, "40 More Years." Thanks, James.