"Nightline" reporter David Wright on Monday inserted a gratuitous slam of Sarah Palin into a seemingly innocuous segment covering the 50th anniversary of the Barbie doll. Recounting the various versions of the Mattel toy, he set up the attack: "[Barbie's] been an astronaut and a rock star. Pop icons Beyonce and Shakira. She's won 'American Idol' too." Right after footage of the "President Barbie" doll appeared onscreen, the segment cut to various clips of a stylish-looking Palin. Wright derided, "Some would argue she also ran for vice president in 2008."

During the 2008 presidential election, Wright would occasionally throw in a out-of-left field shot at Palin or the Republican ticket. Reporting for "Good Morning America" on October 22, he discussed the Republican vice presidential candidate's attacks on Barack Obama and editorialized, "Her own glass house notwithstanding, Sarah Palin has thrown some stones on the issue, too, even though she's not above making gaffes of her own."

In a post-election look back on the November 5 "World News," Wright nastily commented that while some Americans were "impressed" with the Alaska governor, "plenty of others came to see Sarah Palin as an empty designer suit." On October 31 2008, Wright took a swipe at McCain backer Joe "The Plumber" Wurzelbacher, deriding him on "Nightline" as "the Ohio plumber who has become a campaign mascot."

A transcript of the relevant part of the February 16 "Nightline" segment follows:

TERRY MORAN: That long hair, that bizarrely shaped figure and a name you just can't forget. By now, generations of little girls have called Barbie their friend. Others have disdained the doll. Over the decades, Barbie changed, new roles, new looks, often echoing real-life changes in the world around her and sometimes courting controversy. This year, Barbie turns 50. And for David Wright, that's "A Sign of the Times." 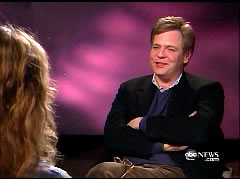 DAVID WRIGHT: She's been an astronaut and a rock star. Pop icons Beyonce and Shakira. She's won "American Idol" too. [footage of Barbie as president doll.] She's even run for president twice. Some would argue she also ran for vice president in 2008. And now, Barbie is chancellor of Germany. Go figure. Always, even at her most professional. Let's just say Barbie indulged her feminine side.