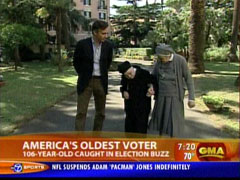 For the second time in three days, a major network program has showcased the story of a 106-year-old nun in Rome who is voting for Senator Barack Obama. On Wednesday's "Good Morning America," reporter Jim Sciutto highlighted Sister Cecilia Gaudette, an elderly woman who has caught "election fever" for the Democrat. The journalist featured Gaudette gushing, "I think he's the man, really. I think so."

Although the story was touted on the October 12 edition of the "CBS Evening News," Sciutto acted as though there was some mystery as to who the women might vote for. "We didn't ask her to reveal who she chose, but she couldn't help telling us," he announced. (Would journalists trek all the way to Rome just to file a report on a nun voting for a conservative candidate, such as John McCain?) And just as with the CBS piece, there was no mention of any possible conflict over a Catholic nun supporting the pro-abortion Obama.

After being prompted by Sciutto as to what qualities the next president needs, the elderly Gaudette replied, "He should be like a father and love his people. And do the best, of course." (The nun is an American citizen and will be voting through the overseas ballot program.)

Sciutto closed the segment by repeating Gaudette's vow to participate in the 2012 election. In a possibly telling remark, co-host Robin Roberts replied, "I'm not voting against her."

A transcript of the October 15 segment, which aired at 7:18am, follows:

ROBIN ROBERTS: And we're also going to introduce you to America's oldest voter. She's 106. She's a nun. She's living in Rome. The last person she voted for, well, she wanted to be like Ike. Let's just put it that way. We'll tell you why she felt it was so important to cast the ballot once again and her advice for the next president .

DIANE SAWYER: That's right. Love her and love how she had to apply to register, too.

ROBERTS: But now, we want to introduce you to America's oldest voter. She's 106. She's a nun living in Rome and the last time she cast a ballot she liked Ike back in 1952. That's the last time she voted. But something about this presidential election has her voting again. And as Sister Cecilia explains to our senior foreign correspondent Jim Sciutto, she does not envy the man who wins in November.

JIM SCIUTTO: This year, election fever has made it all the way to the Convent of Jesus and Mary in Rome. And for no one more so than Mother Cecilia Gaudette. At a sprightly 106-years-old, she is the oldest overseas voter, possibly the oldest American voting anywhere this year. She reads the paper every day and watches the evening news religiously. Politics, though, is a new hobby. The last time she voted was 1952 for Dwight Eisenhower. Do you think this election is important?

CECILIA GAUDETTE: I think it's very important. I pity the poor man who will be president.

SCIUTTO: She asked a younger nun, Mother Mary is only 78 years old, to help her get her overseas ballot. The trouble is, on the U.S. elections website, the birth dates only go back to 1905, three years after Mother Cecilia was born. But they got her a ballot in the end and a chance to speak her mind.

MOTHER MARY: And she was happy to know that she could vote.

SCIUTTO: Having lived through 18 presidents, Mother Cecilia has advice for number 19.

GAUDETTE: He should be like a father and love his people. And do the best, of course.

SCIUTTO: We didn't ask her to reveal who she chose, but she couldn't help telling us.

GAUDETTE: I think he's the man, really. I think so.

SCIUTTO: Her last word? Not likely. She assured us she's planning to vote in 2012, as well. For "Good Morning America," Jim Sciutto, ABC News, Rome.

DIANE SAWYER: Not even.

ROBERTS: I'm telling you what. She is something else.