ABC Gushes Over Gore; Worries He Might Elect McCain 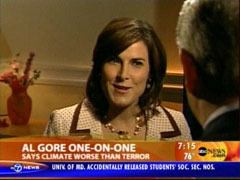 [Updated] "Good Morning America" reporter Claire Shipman on Friday worried that Al Gore's occasional kind word about John McCain might result in the election of the Republican. Interviewing the former vice president about his new energy proposals, the ABC correspondent fretted, "...And some Democratic eyebrows have been raised at your praise of John McCain. Democrats worried that maybe you're, you're going to help him get elected."

That question, which hit Gore from the left, was one of the few, even slightly challenging queries. Instead, Shipman tossed softballs, such as asking, "Do you think that, right now, climate change is as much a threat to our country as terror?" The ex-VP asserted that "the climate crisis is by far the most serious threat we have ever faced" and Shipman offered no follow-up. She failed to ask Gore for some sort of evidence to back up this claim or to point out that terrorism killed 3000 people on 9/11 alone. (How many have died from the "climate crisis?)

Shipman simply fawned over the Democratic politician and cooed, "Many people are also talking about the fact that you would make an incredibly effective environmental czar either for Barack Obama or John McCain. Is that the sort of job that would interest you?"

Following up, she speculated, "Are you saying that some sort of cabinet post might, in fact, limit your ability to influence that issue?"

The MRC's Brent Baker covered the similarly fawning coverage on the July 17 newscasts of CBS and NBC.

Gore also appeared in the 7am hour of NBC's "Today" show. In contrast, reporter Anne Thompson actually asked Al Gore some tougher questions, such as the logical query, how does he plan on accomplishing his energy goals?

THOMPSON: Gore wants to start by setting a goal to generate all our electricity from renewable sources within ten years, like wind, solar and geothermal. How do we reach that goal?

GORE: It's cost competitive now. The costs of coal and oil has been going up so rapidly and the scientific and engineering breakthroughs in renewable energy have brought the costs down. The lines are crossing.

THOMPSON: But a complete shift to clean electricity would require a huge investment. To build transmission lines from wind and solar plants and upgrade the national grid. I understand that what you're talking about is up to $3 trillion investment over 30 years?

GORE: Well, $1.5 to $3 trillion is what we would pay over that period of time if we were going to continue to rely on fossil fuels. It is an investment of both public and private funds that would repay itself many times over.

The segment wasn't free of fawning, however. Thompson did compare Gore to legendary Green Bay Packer quarterback Brett Farve at the close of the piece:

THOMPSON: I asked Gore if in watching Obama and McCain he feels a little bit like retired Packers' quarterback Brett Favre. Does he regret not running again, not getting in the game? He said, no. There are thing he misses about politics and things that he doesn't, but says his job now is to change people's minds about the climate crisis, Ann?

A transcript of the July 18 GMA segment, which aired at 7:14am, follows:

ROBIN ROBERTS: Now, to Al Gore's big challenge to the presidential candidates to help solve our energy crisis. The former vice president wants the country to produce all of its electricity with Earth-friendly power sources within the next ten years. Our senior national correspondent Claire Shipman spoke to Gore about his ambitious plan and his new warning about how dire the situation is.

AL GORE: Today, I challenge our nation to commit to producing 100 percent of our electricity from renewable energy and truly clean carbon-free sources within ten years.

SHIPMAN: Do you think that, right now, climate change is as much a threat to our country as terror?

GORE: Both are serious, must be addressed. That having been said, I think that the climate crisis is by far the most serious threat we have ever faced.

SHIPMAN: You have praised both Barack Obama and John McCain for what they're talking about in terms of environmental policies and some Democratic eyebrows have been raised at your praise of John McCain. Democrats worried that maybe you're, you're going to help him get elected.

GORE: Well, I've endorsed Barack Obama. I'm a Democrat. But I think that John McCain deserves credit for having provided some leadership in the Republican Party years ago at a time when it was needed.

SHIPMAN: One of the things John McCain talks about is, in addition to pursuing alternative sources of energy, is renewed drilling and he makes the case that drilling can be environmentally safe now, it's the same sort of thing that President Bush says.

GORE: Since the first oil crisis back in the early '70s, we've been told that if we simply go for more oil, gasoline prices will come down. We need to break free of this old pattern that's holding us back and develop the renewable sources that can bring about the equivalent of a dollar a gallon gasoline.

SHIPMAN: You are on everybody's list as I'm sure you've seen, short list for VP. Want to do it again?

GORE: Well, I -- you're looking at different lists than I am. I've decided to impose a personal term limit of two terms as vice president.

SHIPMAN: Many people are also talking about the fact that you would make an incredibly effective environmental czar either for Barack Obama or John McCain. Is that the sort of job that would interest you?

GORE: Well, now, the title of czar is intriguing.

SHIPMAN: [Laughs] Is nice, in a different country maybe.

GORE: Yeah. In all seriousness, I do see my role as one that's focused on changing public opinion.

SHIPMAN: Are you saying that some sort of cabinet post might, in fact, limit your ability to influence that issue?

ROBERTS: Our Claire Shipman talking with the former vice president.