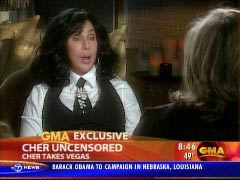 Explaining why she's pro-Hillary Clinton and not supporting Barack Obama, the performer segued into discussing the "saint" known as Jimmy Carter and how "all he talked about was what he wanted to do for this country. And because of his inexperience, they cut him off at the knees." McFadden's response to this glowing assessment of the one term president was to assert, "Maybe you should run for office."

Perhaps it was the positive Clinton comments that prompted McFadden's compliment. After all, this is the woman who told Senator Clinton that it might be a "good idea" to have a Hillary/Bill co-presidency. (During the January 31 "Nightline" interview, McFadden also sympathetically wondered, "When you lie awake at night...what worries you?")

A transcript of the brief exchange, which aired at 8:48am on February 7, follows:

CYNTHIA MCFADDEN: We turn now to politics. So, do you have a candidate?

MCFADDEN: Much of Hollywood has, had lined up behind Barack Obama.

CHER: You know what? I am sure he's a wonderful person. But I had dinner once with someone in the White House, the first time he was in the White House, first night of his presidency, and this man was a saint. And all he talked about was what he wanted to do for this country. And because of his inexperience, they cut him off at the knees.

MCFADDEN: Who are you talking about?

MCFADDEN: Maybe you should run for office.

CHER: No, I would be terrible.

CHER: Yeah, I would be swearing and telling the truth.

MCFADDEN: And she's also got that job to do in Vegas. Well, it's lots of fun to talk to Cher. As for all of those rumors out there. No, Cher and her daughter Chastity are not doing a reality show about gay kids and their parents. And no, contrary to the tabloid reports, Diane, Cher is not sick with cancer.