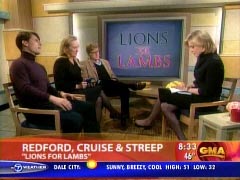 Al Gore. Michael Moore. Robert Redford. On Wednesday, the actor/director became the third prominent left-winger to appear on "Good Morning America" this year and berate journalists for not being liberal enough. Redford, in his second GMA interview this week, Tom Cruise and Meryl Streep stopped by to promote "Lions For Lambs," their new anti-war drama. During the interview, co-host Diane Sawyer played a minute-long clip of the movie in which Cruise's character berates a journalist for being a "windsock" to the Bush administration during the Iraq War. The clip featured Cruise haughtily complaining, "Your network led every report about the invasion of Iraq with the digital screen-sized flag to the square-jawed saluting Marine and the bald eagle soaring to Aaron Copland."

Sawyer then sycophantically begged, "Speaking as your resident windsock, what would you have us do? What would this film have us do?" Being a tough journalist, Sawyer then allowed Redford to get away with responding that when "we found out the cause behind the war was a lie, that's when I think everybody should have stood up, wakened up, and moved forward." At no point did the GMA host point out that, in regards to Iraq, Bill Clinton said the same thing about WMDs as President Bush.

As far as Sawyer's claim to be a "windsock," one might ask the question, for who? The GMA co-host was certainly no shill for the Bush administration prior to the war. As noted in the March 17, 2003 edition of the MRC's Notable Quotables, the journalist, at times, gushed over Saddam Hussein:

Diane Sawyer: "I read this morning that he’s also said the love that the Iraqis have for him is so much greater than anything Americans feel for their President because he’s been loved for 35 years, he says, the whole 35 years."

And this is how the "windsock" for war phrased a question to (then) Democratic presidential candidate Howard Dean on September 8 of the same year:

"Last night, do you feel the President began to level with the American people?"

– Diane Sawyer to Democratic candidate Howard Dean on ABC’s Good Morning America on September 8, the morning after President Bush’s speech to the nation.

Cheerfully embracing criticism from prominent liberals has become a trend for "Good Morning America." In June, co-host Chris Cuomo interviewed Michael Moore about Iraq, among other issues. The filmmaker asserted that, because the networks didn't challenge Bush in the run-up to the war, they were "complicit" in the deaths of U.S. soldiers. In June, Al Gore appeared to promote his new book and assert that the media is hypnotizing Americans, much in the way that "you could hypnotize chickens."

In addition to accepting journalistic criticism from the left, Sawyer generally fawned over "Lions For Lambs." She lovingly called it a movie that "really challenges you to examine some of your basic assumptions about life and politics." Sawyer also recited a lament that "someone" said (a cute reference to Streep's Time magazine interview), "We are afraid to speak. We are afraid to speak up. This film is the difficulty of standing up." It sure seems like liberals aren't having a problem in "standing up" and challenging journalists to be even more liberal.

Finally, as if GMA hasn't promoted this propagandistic film enough, Sawyer closed the segment by promising yet another interview, this one exclusively with Meryl Streep, on Thursday. And it should be noted that Redford appeared by himself on Tuesday.

A transcript of the segment, which aired at 8:32am on November 7, follows:

DIANE SAWYER: And coming up right now, Robert Redford, Tom Cruise, Meryl Streep, together. They're in a new movie called "Lions for Lambs," which really challenges you to examine some of your basic assumptions about life and politics and it opens on Friday. But we had a chance to sit down, because, of course, not only are they co-workers, they are pals. And the two guys made it clear they thought it was pretty funny when the flawless Meryl Streep, drinking very quickly, seems to have-- well, was that a burp? Are you laughing already at my questions?

ROBERT REDFORD: No, at her belch.

SAWYER: Oh, okay. All right, that's permitted? Was it loud?

MERYL STREEP: Do you have to give away everything? 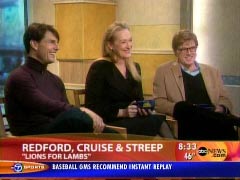 STREEP: I think that, for me, it was about that. What am I willing to do for this war? Am I willing to give a kid? And if I'm not, why am I not speaking about it? Nobody has a stake in this war except for one percent of the population. The people that made it won't ask their own kids to fight in it. And the rest of us are living as if there's no war.

SAWYER: The film is a duel of ideas and challenges. Which side are you on? Including a conversation between a journalist, played by Streep, and a senator, played by Cruise.

TOM CRUISE CHARACTER: When did you all become a windsock?

MERYL STREEP CHARACTER: A what?

TOM CRUISE: Wind sock. Blows with the prevailing breeze. When did you start confusing majority opinion with the right opinion?

STREEP: Sort of like when we supported going into Iraq?

CRUISE: Supported? Oh, no, no, no, no, you guys sold it. Your network led every report about the invasion of Iraq with the digital screen-sized flag to the square-jawed saluting Marine and the bald eagle soaring to Aaron Copland.

STREEP: That's because we believed and you believed Iraq is a legitimate enemy and you asked us for the benefit of the doubt--

CRUISE: They are a legitimate enemy.

STREEP: --because we have troops in harm's way.

CRUISE: And your network provided that benefit without a blush.

STREEP: We gave it to you.

CRUISE: We both, Janine, we both put our fighting men at risk. Now, I've admitted my mistakes. When will you?

SAWYER: Yes, in the film journalists forced to answer too. As you heard in the film, they are called wind socks. Speaking as your resident windsock, what would you have us do?

REDFORD: You know what --

SAWYER: What would this film have us do? Redford says on 9/11, all of us, including journalists, had to rally together. But after that?

REDFORD: At the point we found out that the cause behind the war was a lie, that's when I think everybody should have stood up, wakened up, and moved forward.

STREEP: We're always screaming at the television. And we go on television and we're--

SAWYER: Very polite, except for the burping thing.

REDFORD: No, a belch.

SAWYER: What have you seen when college kids have seen the film?

REDFORD: The younger the student, it seemed to me, the more energized.

STREEP: My 16-year-old and her friends like the movie, the screening, the best, which I take to be first of all the highest compliment because there is no tougher critic, but also great good hope for interest in talking about stuff.

REDFORD: Yeah, my 16-year-old, grandchild, has had the same reaction.

STREEP: She had a lot of comments on the set though.

SAWYER: Does she babble?

STREEP: Yes, over my line.

TOM CRUISE: She did, a couple times.

SAWYER: Tom Cruise has several roles on this film. He is the studio mogul now who green-lit the project. He's also the star and, he adds, a fan.

CRUISE: You know, I'm here to help the artist do anything I can in any way. I'm the one who's being schooled and learning, and I was always, quietly, like, trying to take a moment when everyone wasn't -- and I'd sit down and go, so, you know, "Out of Africa," how was that -- what was that?

SAWYER: "Out of Africa." It was 22 years ago Redford and Streep worked together. So before they left, we asked the old friends if they would answer some of the random questions posed by the staff. Who of you is more likely to cry at a chick flick?

SAWYER: Again, three powerhouses in a new movie which really does ask some tough and important questions. And it's opening on Friday. By the way, also in the news, of course, Tom Cruise's wife, Katie Holmes recently finished the New York City marathon. We asked about that.

SAWYER: Did she take the day off afterwards?

CRUISE: No. She got her heels on and we went to the screening for "Lions for Lambs" and she's right -- you know, mom and working. Impressive. She trained. She inspires me.

SAWYER: And "Lions for Lambs," once more, opens on Friday. And Meryl Streep was sticking around and we had a chance to talk with her about a lot more. That will be coming up later.