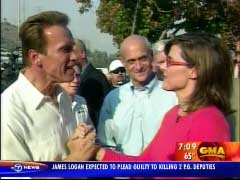 Reporter Claire Shipman did her level best to get California Governor Arnold Schwarzenegger to say the efforts to combat the state's wild fires were going poorly. Shipman interviewed the governor on Wednesday's "Good Morning America" and wondered about "the comparison to Katrina that everybody's making in the back of their mind..." At one point, Governor Schwarzenegger cut off Shipman's pleas for negative assessments of the effort by grabbing her arm. He bluntly scolded, "Trust me when I tell you, you're looking for a mistake and you won't find it because it's all good news, as much as you maybe hate it, but it's good news."

Earlier, the ABC correspondent attempted to deflate Schwarzenegger's sunny optimism by mentioning unnamed officials in Orange County who asserted the state doesn't have enough resources, including firefighting aircraft. The former actor simply wouldn't go along with this premise of victimization. He firmly retorted, "Anyone that is complaining about the planes, just wants to complain because it's a bunch of nonsense." Schwarzenegger then proceeded to point out that the state has 90 planes and only wind has hampered their use.

Shipman also spun President Bush's planned visit on Thursday as a bad thing. She noted how the governor "remained upbeat" about the trip. Later, somewhat incredulously, the ABC reporter stated that Schwarzenegger "actively encouraged" the visit and that "...despite the disruption this presidential visit will cause tomorrow, it will keep the federal government and all of its resources focused on California, ideally hoping to stave off any Katrina-like situations." However, as a September 1, 2005 CyberAlert noted, "Good Morning America" anchor Diane Sawyer grilled President Bush for not being proactive in terms of dealing with Hurricane Katrina.. In addition to several other left-leaning questions, he asked him, "When are you going to go?"

A transcript of the October 24 segment, which aired at 7:07am, follows:

DIANE SAWYER: Of course, the man in charge of the battle against nature is Governor Arnold Schwarzenegger. And ABC's senior national correspondent Claire Shipman talked one-on-one with the governor and has that exclusive interview. Claire?

CLAIRE SHIPMAN: Diane, this is a governor who is always up, who never betrays a hint of worry. And so, characteristically, even after visiting the front lines of these devastating fires, after coming here to see the evacuees, he was relentlessly insistent that the effort is going well. The spotlight squarely on the governor as he navigates California’s biggest crisis on his watch.

CALIFORNIA GOVERNOR ARNOLD SCHWARZENEGGER: We have to do everything we can to protect the people and protect the property.

SHIPMAN: Relentlessly delivering the same message around devastating parts of the state.

SCHWARZENEGGER: You should know you're not out there by yourself fighting these fires, that the state is there to help you.

SHIPMAN: We caught up with him for an exclusive one-on-one at the makeshift evacuee camp at the Qualcomm Stadium. His optimistic demeanor going full tilt.

SHIPMAN: So, you think the comparison to Katrina that everybody's making in the back of their mind these days is a good one in terms of state and federal.

SCHWARZENEGGER: All you have to do is just look around here and see how happy people are. No one is screaming. No one is complaining about anything.

SHIPMAN: Well, you're saying everybody's working together, but you have heard there have been some complaints from officials. For example, in Orange County who say, 'If we'd only had more resources earlier, more planes, more firefighting resources, we might have been able to head off the fires ravaging Orange County right now.'

SCHWARZENEGGER: Anyone that is complaining about the planes just wants to complain because it's a bunch of nonsense. The fact is that we have all the planes in the world here. We have 90 aircraft here and they can't fly because of the wind situation.

SHIPMAN: At one point, he even employed a heavy weight grip to make his case. The point he was making, you have to be ready to fly --

SCHWARZENEGGER: Trust me when I tell you, you're looking for a mistake and you won't find it because it's all good news, as much as you maybe hate it, but it's good news. Trust me, okay?

SHIPMAN: When we agreed to move on to another subject, the President's plans to visit California Thursday, the governor remained upbeat.

SCHWARZENEGGER: Whenever the president shows interest in our fires--

SCHWARZENEGGER: --and wants to help, you know, the federal government has a lot of help ready for us. We want to utilize that help.

SHIPMAN: So the governor is positive, but practical. He actively encouraged President Bush to come out here as soon as possible. He knows that despite the disruption this presidential visit will cause tomorrow, it will keep the federal government and all of its resources focused on California, ideally hoping to stave off any Katrina-like situations.