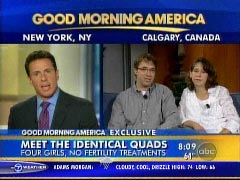 On Wednesday’s "Good Morning America," anchor Chris Cuomo completely glossed over the health care implications of a Canadian mother giving birth to quadruplets in America and not her home country. According to Cuomo, Karen Jepp and her husband, the new parents of identical quadruplets, had to be flown 300 miles from Calgary to Montana on August 16, because "every neo-natal unit in their country was too crowded to handle four preemie births."

Apparently, it didn’t occur to Mr. Cuomo to wonder why all the hospitals in Canada, a nation with universal health care, were full. During a subsequent interview with Jepp and her husband J.P., the co-host continued with this unquestioning explanation. He elaborated, "...Towards the very end, it gets even more complicated....You know, they're not ready for them at the hospital. Your doctors have to make calls. You have to fly 300 miles to have [the children]." Considering that back in June, "Good Morning America" co-anchor Diane Sawyer announced "a commitment to take a hard look at the health insurance industry," it seems odd that unusual circumstances, which forced a very pregnant mother to fly to another country and give birth, would be of such little interest to Mr. Cuomo.

It should be noted that an AP article on the family also buried the reason that the birth took place in America and not Canada.

Overcrowding and long waits may not interest "Good Morning America," but the program does seem to take advantage of any opportunity to make the U.S. medical system look bad. In June, GMA reporter John Berman wondered if crooks who rip off hospitals were doing so because they’re "fed up" with the American health care.

A partial transcript of the August 22 segment, which aired at 8:07am, follows:

Chris Cuomo: "Okay. We all know that a child is an overwhelming blessing for any parent. But imagine quadruplets, identical quadruplets. That's a one-in-15-million blessing and that's what the Jepp family now has. Talk about a difficult delivery. This one took three plane trips and two countries. Here's the story. It took just four minutes on a Sunday afternoon to change the life of the Jepp family forever. These four, tiny miracle babies are identical quadruplets, one of just 50 sets of identical quads in the world. And these little girls, Autumn, Brooke, Calissa and Dahlia, were conceived without the help of fertility drugs. In Karen Jepp's case, one egg split three times to produce four babies. Typically, there are four placentas. But in this rare case, there was just one."

James Grifo (NYU medical center): "This is incredibly rare. You're talking about a one in 11, to one in 15 million event."

Cuomo: "But there was yet another rare event for this Canadian couple. Shortly after she went into labor, the Jepps discovered that every neo-natal unit in their country was too crowded to handle four preemie births. After an hour of frantic phone calls from their doctors, they were jetted off to a hospital in Montana."

Karen Jepp: "The nurses have been wonderful and really helped us out because we're, we have no idea what we're doing."

Cuomo: "Now, so interesting that on top of all the stress you must have been feeling to deal with the fact that quads were coming, towards the very end, it gets even more complicated. You can't-- You know, they're not ready for them at the hospital. Your doctors have to make calls. You have to fly 300 miles to have them. How did you cope with all of that?"

J.P. Jepp: "Well, you do what you've got to do. And the most important thing is the health of Karen and the health of the babies. It was the right decision to send us where the, the resources were at that moment in time. The staff at the Benefits Hospital in Great Falls, Montana, were absolutely amazing, took care of us medically and then took care of us as people and it turns out to be a blessing in disguise that we made the trip down there and we thank them for all their help."