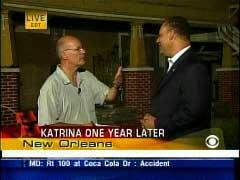 Harry Smith, "Early Show" co-host, reported live from New Orleans today on the state of the city one year after Hurricane Katrina. Smith essentially had one type of question: Exactly how horrible is the situation today? The CBS journalist talked with Oliver Thomas, President of the New Orleans City Council. He lectured Mr. Thomas, telling him, "Folks feel abandoned. They feel forgotten. They feel desperate." This, despite the fact that more then $44 billion has been spent on rebuilding the Gulf Coast, with a total of $110 billion designated for the project.

Smith began the interview, which aired at 7:10AM EDT on August 28, by asking, "...Could the levees withstand Ernesto if Ernesto turned and came up this way?" Mr. Thomas told him that, while the situation isn’t perfect, the levees are much stronger and more reinforced then a year ago. Apparently this wasn’t the proper answer, because Smith then rephrased remarkably similar questions:

Smith: "If Ernesto came here two days from now, would the city be evacuated? Would we have the same horror story from a year ago?"

Again, the city councilman replied in the affirmative. Of course the city would be evacuated. The "Early Show" co-host interrupted quickly interrupted him with a gloomy scenario:

Finally, Mr. Thomas moved on to the kind of discussion that Harry Smith could get excited about. He predicted that if another hurricane hit New Orleans, the federal government would react swiftly:

Oliver Thomas: "What you'd probably see from the federal government, state and city government right now is more reaction than you've ever seen at any time in terms of preparation. So you'll probably get overreaction. I'd rather have overreaction than the same kind of response we had last time which was no reaction at all."

No reaction? A tough journalist might challenge that assessment, or ask about the lives saved by the National Guard during risky rescues. Smith, however, stayed quiet. He did perk up when Thomas started criticizing the government’s fiscal response. In fact, he soon sounded like a church parishioner shouting "amen" back to the preacher.

Thomas: "But I think the most critical thing is they'd love to see these resources-"

Thomas: "-That everybody keeps talking about, the billions of dollars that have been appropriated."

Thomas: "Well, why haven't they gotten to the hands of the people yet?"

Thomas: "I think as soon as people start getting their relief, and this is what folks need to understand-"

Thomas: "-The people here didn't conjure up the levee."

Thomas: "I mean, they didn't conjure up the storm."

Thomas: "And they didn't break those levees."

Thomas concluded by stating, "Everyone here deserves to be made whole." Mr. Smith, rather then ask how exactly the federal government would make people "whole," or even if that’s the government’s job, simply replies with one last "right." Interestingly, after being told by Thomas that New Orleans will "absolutely" come back, the veteran CBS journalist could only offer what sounded like an exasperated sigh. The lesson here is that if you want Harry Smith to engage you in an interview, negativity is the best strategy.