Eyebrows were raised Tuesday on Morning Joe after the New York Times featured a Harvard study that highlighted the relationship between race and the use of force in police shootings. Even Roland Fryer, the author of the study, described it as “the most surprising result of his career.” Panelists were most troubled by the findings of “no racial bias” in 1,300 incidents of police shootings in Texas, Florida and California. Bewildered Eugene Robinson described the results as “not comporting with reality” while melodramatic Mike Barnicle “got a headache reading it.”

EUGENE ROBINSON: These numbers surprise me. It's a study I'd love to see replicated. I'd love to see some you know back up because frankly a lot of people find, will find it hard to believe.  And I find it hard to, hard to comport with the reality that we see. If you look qualitatively at these incidents we have seen over the last few years, it's difficult to find parallel situations in which white suspects have been killed.

Once his headache subsided, Mike Barnicle insisted the findings did not depict “reality” and that “one of the problems with studies like that is it takes our eyes off the ball.” He then shared his version of reality with viewers:

ROBINSON: I had told my two sons that.

BARNICLE: You had to do that.

It is concerning that Mike Barnicle thinks just because his sons are white and Eugene Robinson’s sons are black that the lessons they taught their children resonate with every black or white person living in this country. Katty Kay also felt it appropriate to share a personal anecdote of a friend who has “one black son and one white son:”

These liberal journalists’ reaction to the Harvard study should raise many eyebrows. Only one component of the study was to their dissatisfaction, as multiple other findings show the “reality” they were hoping for, that blacks were measurably more likely to have force used against them than whites.

If the results had been more amenable to their liberal-entrenched philosophies, I doubt Eugene Robinson would be asking to see “the same study duplicated” and Mike Barnicle wouldn’t be reaching for Aspirin to ail is aching head. 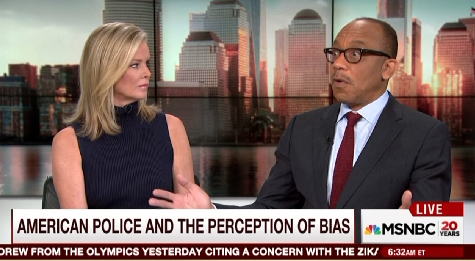 KATTY KAY: Well in the search for answers to the questions of race and the excessive use of force, some interesting and provocative data has risen on recent, on recent research in recent days including this analysis from a Harvard economics professor on the "New York Times" upshot blog. He noted the FBI statistic show that 31.8% of people who are shot by police are shot by African-American. While a similar percentage, 28.9% of arrestees are African-American. While bias comes in to play with how those numbers are out of proportion with the percentage of African-Americans in the population. He points out that the percentage of arrests and percentage of shootings being close to equal indicates there isn't added bias when it comes to police shootings. As for the incidents of police shootings, another new study could find no racial bias. The study focused on more than 1,300 shootings, fatal and nonfatal, in 10 police departments, in Texas, Florida, and California. "The New York Times" reports, “in shootings in these 10 cities involving officers, officers were more likely to fire their weapons without having first been attacked when the suspects were white. The study was conducted by Roland Fryer, the youngest African American to receive tenure at Harvard, who called it the most surprising result of his career. However, in many other encounters according to the same study blacks were measurably more likely to have force used against them than whites, 17% more likely to have police officers put their hands on them, 18% more likely to be pushed into a wall, 16% more likely to be handcuffed, 19% more likely to have an officer draw a weapon on them, 18% more likely to be pushed to the ground, 24% more likely to have a weapon pointed at them and 25% more likely to be pepper sprayed or struck with a baton. It’s on the front page of the New York Times, Joe. I, I was really surprised by that finding.

JOE SCARBOROUGH: This is the second "New York Times" article since Dallas—

SCARBOROUGH:  —that shows that when it comes to actual shootings there is not the bias that I think most of us suspect there has been if you look at the data. Gene Robinson, you look at every other area, though, there is, there obviously is clear bias—

EUGENE ROBISNON: Yeah you look at it—

SCARBOROUGH: —in the numbers if it’s just data driven.

ROBINSON: These numbers surprise me. It's a study I'd love to see replicated. I'd love to see some you know back up because frankly a lot of people find, will find it hard to believe.  And I find it hard to, hard to comport with the reality that we see. If you look qualitatively at these incidents we have seen over the last few years, it's difficult to find parallel situations in which white suspects have been killed. I mean you know. Like Walter Scott running away from the police officer in Charleston or, or even, you know, like what we've seen in the last couple of weeks. So um--

KAY: Do you think Gene, is it possible that those incidents are happening, a white police officer runs, I mean a white suspect runs away, gets shot by police, and it doesn’t come to public attention in the way that it does when a black suspect is running away or do you think it's just not happening and that the data is faulty?

ROBINSON: Well I mean look at what happened yesterday at the Michigan courthouse [laughs] right? So here is a, here is a suspect, shoots two you know—

ROBINSON: —bailiffs in a courthouse, right. And so immediately, it's a huge story and everybody is thinking oh black lives matter and this and that, it was a big deal. And it turns out to be a white suspect. And then, it kind of, recedes.

MIKE BARNICLE: You know. One of the issues about that study, first of all, I got a headache reading it. I had trouble following it actually.

BARNICLE: One of the problems with studies like that is it takes our eye off the ball. I mean we refer to studies instead of the reality. And the reality is that police departments in major cities in this country have been forced over the last ten or fifteen years to be urban replicas of the Marine Corps. I mean everything is thrown on them, everything thrown on the police departments. Every societal and cultural change over the last ten or fifteen years, when it breaks down, let the cops handle it. Chief Brown—

BARNICLE: —spoke to this yesterday. The other aspect of it is, the really reality, real world aspect of it is, Gene has a son, I have three sons. I never had to tell my sons when they were 14, 15 about to get their driver's license, remember, keep both hands on the wheel if you get pulled over.

BARNICLE: Act respectfully, I never had to do that.

ROBINSON: I had told my two sons that.

BARNICLE: You had to do that.