Just six days after getting booed at a Washington Nationals game, Donald Trump received an equally not-so warm welcome when he attended a UFC fight in liberal New York City, Saturday. The President’s decision to attend sporting events in liberal strongholds appears to have rubbed many in the liberal media the wrong way, especially Ana Navarro of ABC’s The View and CNN. She sent out a hateful tweet suggesting that Trump should stick to attending Ku Klux Klan meetings. 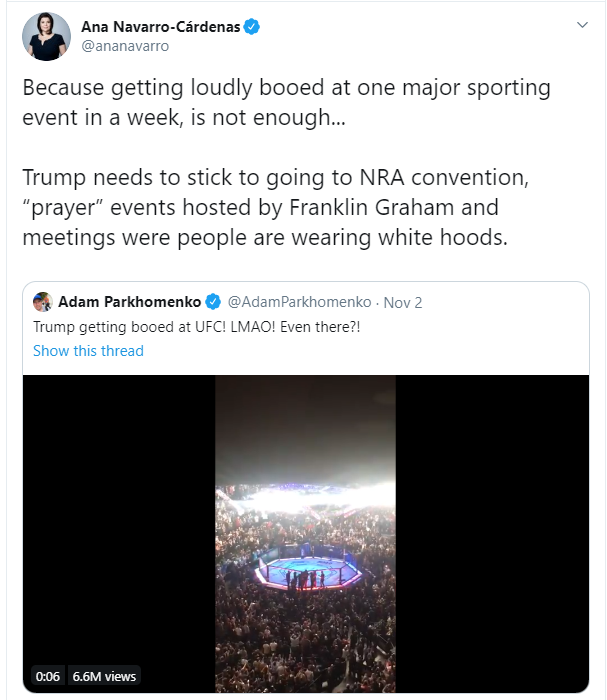 In response to Trump’s reception at the UFC event, Navarro concluded that for the President, “getting loudly booed at one major sporting event in a week is not enough.” The CNN contributor proceeded to advise the President to “stick to going to NRA convention (and) ‘prayer’ events hosted by Franklin Graham.”

Navarro saved her most outrageous statement for the last part of her tweet; where she suggested that in addition to limiting himself to attending events where he might have an opportunity to interact with actual Republican voters, Trump should stick to attending “meetings where people are wearing white hoods.” Considering the fact that Navarro once proclaimed that Trump was “unfit to be human,” it should have come as no surprise that she would compare him to a member of the Klan.

Unfortunately, comparisons of Republicans and Trump to the KKK have become commonplace as the liberal media have collectively succumbed to Trump Derangement Syndrome. Over the summer, The Late Show host Stephen Colbert reacted to a clip of Democratic presidential candidate Pete Buttigieg complaining that “the Republican Party likes to cloak itself in the language of religion” by declaring “I don’t know, mayor, nowadays, it’s less of a cloak and more of a sheet.”

Back in January, presidential historian and frequent MSNBC guest Jon Meacham took to Twitter to compare Trump’s rhetoric to the language used by then-Georgia Governor Clifford Walker at a 1924 KKK Convention; specifically, his suggestion that “America should ‘build a wall of steel, a wall as high as Heaven’ against the flow of immigrants.”