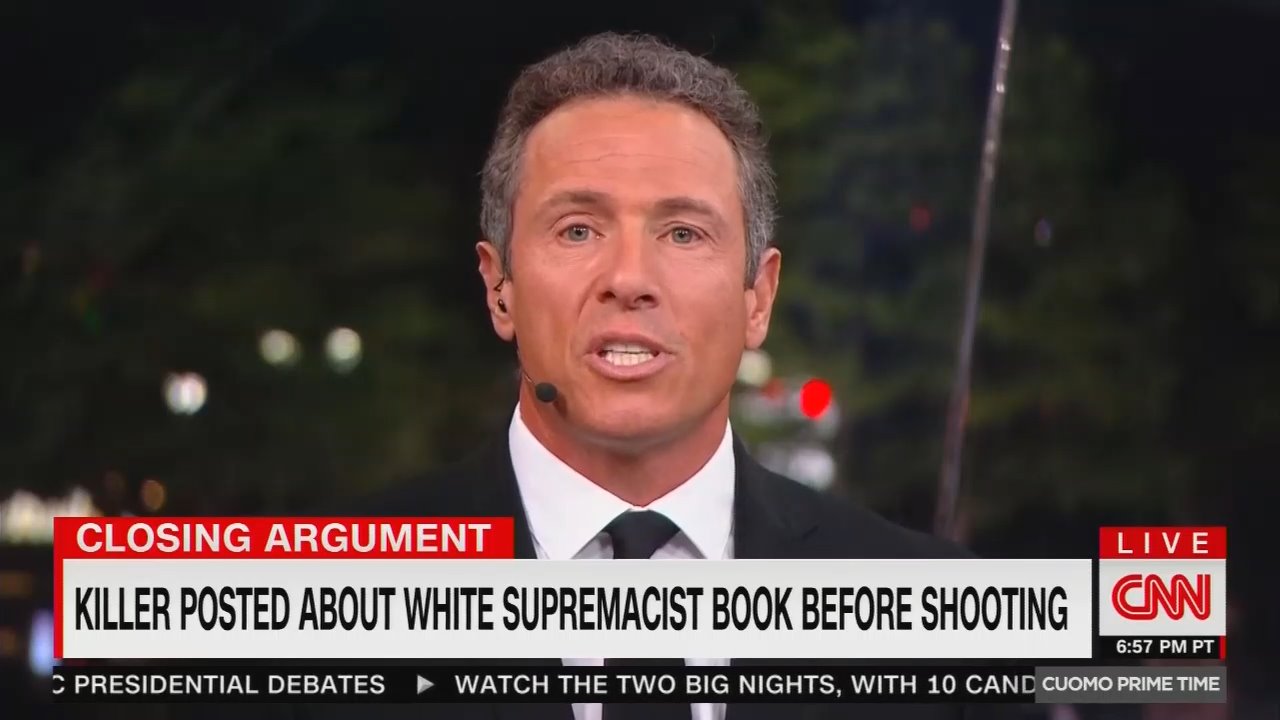 During his closing argument Monday night, CNN host Chris Cuomo brought up the shooting in Gilroy, California. While his closing monologue stayed away from gun control lectures for the most part, Cuomo could not resist using the shooting as an excuse to trash Donald Trump.

Cuomo brought up how the shooter promoted a “white supremacist book from the late 1800s” on his Instagram page right before the shooting before painting a picture of an epidemic of hate crimes, white supremacist groups, racist rallies, and white supremacist propaganda; obviously attempting to lay the blame for the epidemic at the feet of President Trump.

After complaining that “Too many are saying, 'Well, we don’t know that this guy was a real racist or a real white supremacist,'” Cuomo slammed that train of thought as rationale “extended as protection to this President for not addressing what seems pretty clear about why this happened.”

Cuomo stressed, “I am not blaming the President” while arguing, “What you ignore, you empower” and asking “why strain to defend people in Charlottesville? Why play down what happened in New Zealand and why?” The CNN host implied that President Trump was a racist because, in contrast to his “not mentioning what this murder was about,” he had “no problem calling Baltimore infested” and saying “no human would want to live there.”

Throughout the latter part of the closing argument, the chyron at the bottom of the screen read "Trump’s Penchant for Downplaying White Hate Matters.” Cuomo basically begged the audience not to support President Trump in 2020. He cited The Baltimore Sun’s description of President Trump as a “rat” as an example of “the animus he is engendering,” adding “this cannot be us.”

According to Cuomo, President Trump “picks the wrong fights and he runs from the right ones. He too often says things that foment division. He does it on purpose. And he has to own that. And if you support him, you must as well.” As the hour came to a close, Cuomo opined “I don’t see how he wins empowering a minority in a way that clearly is galvanizing the majority. I know there are few one-term Presidents, especially with a good economy and no massive threat abroad but this is not a normal time and this is not a normal President.”

Weighing on the upcoming Democratic debates on CNN, Cuomo made a prediction that “the man or woman that shows this country they can be strong by building us up, and bringing us together, will find a country desperate to go along.”

As he tossed it over to CNN Tonight host Don Lemon, who will serve as one of the moderators for the debates, Lemon declared that President Trump “emboldens bigots,” adding “bigots embolden him as well.” Not surprisingly, Cuomo seemed to agree with his analysis; later reiterating his point that “this country is desperate for better…than it’s getting right now.”

A transcript of the relevant portion of Monday’s edition of Cuomo Prime Time is below. Click “expand” to read more.

CHRIS CUOMO: If you want to talk about the shooting in Gilroy, California, this is the picture to see: six-year-old Stephen Romero. This is the picture to see: 13-year old Keyla Salazar. They were shot dead along with Trevor Irby, who was in his 20s; all three stolen from their loved ones by hate. A dozen others were injured. The murderer legally bought the rifle. Of course, he bought it in Nevada, took it into California, where it is illegal to buy the same weapon. That’s a problem that we just can’t seem to fix. He got it in by cutting a hole in a fence to sidestep metal detectors. But I want to talk about why he did this. He posted two Instagram messages right before the attacks, okay? That is called a present sense impression in the law. It’s not a maybe. This is what was on his mind right before he killed those people, and I don’t understand why we’re hiding from it. The book he suggested is a white supremacist book from the late 1800s. Don’t dismiss what this murderer believed. He’s now dead, so his days of acting on hate are over, but there are a lot more like him, and we have to stop hiding from that fact. Just ask Trump’s FBI Director Christopher Wray.

CHRISTOPHER WRAY: I will say that a majority of the domestic terrorism cases that we’ve investigated are motivated by some version of what you might call white supremacist violence, but it includes other things as well.

CUOMO: Number of hate crimes up, number of white supremacist groups up, number of racist rallies up, the amount of white supremacist propaganda up. But too many are saying, “Well, we don’t know that this guy was a real racist or a real white supremacist,” and that rationale is extended as protection to this President for not addressing what seems pretty clear about why this happened. I am not blaming the President. But what you ignore, you empower. Why strain to defend people in Charlottesville? Why play down what happened in New Zealand and why? He said he felt bad for the victims here, and for the families in Gilroy, and that the killer was wicked, and those are the right things for a President to say. But what explains his not mentioning what this murder was about? Fear of being wrong? Please! What other President, in my lifetime, would stop where he did? A President should condemn the motivation, condemn people who think that way as un-American; that we all together are much more powerful than they, and we will root them out where they live and punish them for acting on the worst of ideas about the rest of us. No problem calling Baltimore infested. “No human would want to live there.” No problem stoking those feelings time and again, hiding behind surrogates who say “He’s talking about conditions, he’s refusing to back down because he’s tough, he’s a fighter.” Look at what the paper there said, The Baltimore Sun. I’ve never seen anything like it. They literally called the President of the United States a rat. That is the animus he is engendering. This cannot be us. Continuing that fight with a Congressman, Elijah Cummings, who returns home to Baltimore every night, I don’t give a damn about his politics. This is about people. Elijah Cummings walked me through the streets of Baltimore during riots. I saw a level of respect for that man and a level of connection to his community that is rare in the game of politics. Know that. This President picks the wrong fights for the wrong reasons, and it’s not enough for him to say to Don, he’s the least racist, okay? He’s supposed to be anti-racist, not just the least racist. Words must carry the weight of resolve to elevate who we are and to promise action against those who try to divide us or worse, and he doesn’t do it. He picks the wrong fights and he runs from the right ones. He too often says things that foment division. He does it on purpose. And he has to own that. And if you support him, you must as well. Even when someone else writes the correct words on a teleprompter, he struggles. He often ad-libs. This isn’t about style. It’s about substance. He says something to distort the right message. Why? I don’t see how he wins empowering a minority in a way that clearly is galvanizing the majority. I know there are few one-term Presidents, especially with a good economy, and no massive threat abroad, but this is not a normal time, and this is not a normal President. Know this about the debate tomorrow night, the man or woman that shows this country they can be strong by building us up, and bringing us together, will find a country desperate to go along. Thank you for watching tonight, the eve of a big occasion. CNN Tonight with one of the stars of tomorrow night, D. Lemon, starts right now.

LEMON: But bigots embolden him as well. There are many. Not all of his supporters are bigots. I’m not saying that. But there are people who are out there who don’t stand up to this President. And so, what category does that put you in if you don’t stand up to this President? When it is obvious beyond a doubt that what he is promoting is bigotry. You use the word racist if you want. Some people want to use that word. But for me it’s bigotry. Because it’s more…it’s…it’s…it’s about blacks. It’s about, as you always…

CUOMO: It’s wider than that.

LEMON: You call it the brown menace.

CUOMO: Well, look, we are in a culture reversal right now. We have spent years letting people know like this guy in Gilroy that you need to stay down and you need to stay away because we are not about you.

CUOMO: That has reversed. Here’s what I feel badly for. When we’re in a place like this in Detroit and you know, on the radio show I get to talk to people all across the country a lot. He’s doing them a disservice, the people who believe in him as a disruptor of the norm; who will finally find some way for government to care about them and people like them because now they’ve got to own all this talk and a lot of them didn’t sign up for that. They signed up because they want manufacturing back, they want other things. You’re right. Some people cotton to him because of the hate, but not all of them.

LEMON: There are many reasons that people…that some of the people who do it on television do it because they feel that they have to politically. They’re getting paid. It’s a paycheck somewhere.

CUOMO: And they’re afraid of him. He’s very popular in the party.

LEMON: And they’re afraid of him. Right. And they’re afraid of him. Other people do it because in some way they think it’s a reflection of them. And if they call out his bad behavior, his bigotry, and at times racism, then that makes them either bigoted, racist or complicit. And I think that is something that you, you got to dig deep. That’s a…that’s a fantastic question to ask yourself in this moment. Who am I? What am I? What am I supporting? And is what I’m doing American? Is…is this the best way, not only for me and for my family, for this country as well? Am I putting…am I elevating or at least prioritizing bigotry and racism over the right thing to do?

CUOMO: Yeah. And look, it is an obvious question.

CUOMO: Because you cannot say that I love the President because of his economics and I don’t like what he says on…no, no. It’s not like, the guy is picking one team over another in a football game.

CUOMO: These are real divisions and he’s playing on them and they cannot be dismissed. They may think they can be but…but they cannot. And tomorrow night and you know how much I love you. And it’s going to be great to see you up there because this is a chance. This country is desperate for better…

CUOMO: …than it’s getting right now.

CUOMO: What man or woman can have a message and connection themselves as the proper agent for that message with the American people? And it’s great that you’re going to be bringing out that conversation.