Investigative journalist Sharyl Attkisson began the latest edition of her weekly syndicated show Full Measure with an in-depth report on the growing distrust of the media. The package focused heavily on the results of a poll conducted for Full Measure by pollster Scott Rasmussen, which had some devastating results for media credibility. In summation, Rasmussen concluded that voters see journalists as “political activists, not as a source of information.”

After pointing out that “it’s been a bad few years for media credibility,” Attkisson began discussing the results of the poll. A plurality of those surveyed, 42 percent, saw national political news coverage as “inaccurate and unreliable” while only 26 percent thought that “political reporters carefully report facts.” On the other hand, 57 percent of respondents thought that political reporters “use news stories to promote their own ideological agenda.”

In an on-screen interview with Attkisson, Rasmussen concluded that “we have a world where people look at journalists like they look at Wikipedia. ‘Gee, that’s an interesting fact. I better check it myself.’” According to Rasmussen, this proves that “the media has a huge credibility problem.”

The poll also found that 52 percent of respondents say that political news coverage is “worse compared to five years ago.” Nonetheless, Rasmussen stressed that the media have “always had” a credibility problem, adding that “people were complaining about the bias of Walter Cronkite back in the 1960s,” specifically regarding his coverage of the Vietnam War.

Rasmussen also talked about how people have hated the media for a long time, arguing that President Trump merely “capitalized on that,” rather than creating an “environment where everybody hates the media.”  Rasmussen stressed that “he’s not the first to do so,” mentioning that President George H.W. Bush got kind of testy during an interview with Dan Rather; where the then-Vice President criticized the CBS host for attempting to judge his “whole career by a re-hash on Iran.” 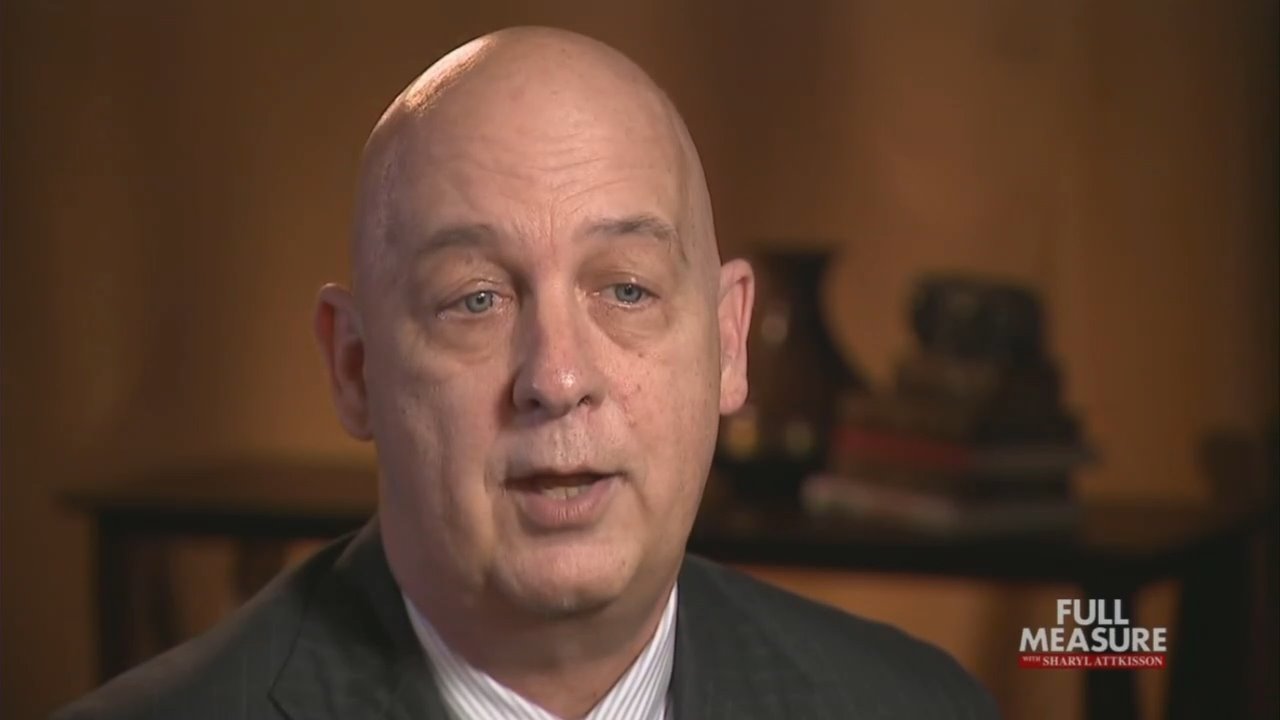 Eventually, the pollster highlighted the most shocking result of the poll: “78 percent of voters say that...what reporters do with political news is promote their agenda. They think they use incidents as props for their agenda rather than seeking to accurately record what happened” while “only 14 percent think that a journalist is actually reporting what happened.”

Rasmussen continued: “if a reporter found out something that would hurt their favorite candidate, only 36 percent of voters think that they would report that.” Rasmussen summed up the results of the poll by declaring that voters see journalists as a “political activist, not as a source of information.”  It looks like the media have a lot of work to do if they want to reconvince the American public that they are fact-driven, not agenda-driven.

A transcript of the relevant portion of Sunday’s edition of Full Measure is below. Click “expand” to read more.

SHARYL ATTKISSON: Welcome to “Full Measure.” I’m Sharyl Attkisson. Today, we begin with a new “Full Measure” poll on the national media. As you might expect, the results aren’t very good for the media. Whether it’s coverage of the Russia investigation or the Covington High School kids, news consumers on all sides of the political spectrum report declining trust in us. We turn to two experts to analyze the current media madness.

PRESIDENT TRUMP: Hopefully, we can rise above partisan politics in order…

ATTKISSON: One need only sample lowlights from last January to get a sense of the problem. A Seattle Fox affiliate aired a doctored video of President Trump.

UNIDENTIFIED MALE: The comparison shows Trump with an altered face and a looped
licking of his lips.

ATTKISSON: And a January article about Melania Trump in The Telegraph was followed by seven corrections, an apology, and an undisclosed payment to Mrs. Trump. One-sided narratives presented virtually unchallenged; national news quoting anonymous sources that
turn out to be wrong.

ATTKISSON: Also in January, there was a BuzzFeed bombshell.

LAWRENCE O’DONNELL: The headline contains the most devastating part: “President Trump Directed His Attorney To Lie To Congress.”

JAMES COMEY: In the main, it was not true.

ATTKISSON: And NBC News reported that Russian President Putin said he had compromising information about Trump. Actually, Putin said the opposite.

SCOTT RASMUSSEN: We asked about national political reporters, you know, are, are they credible, are they reliable? And you know, a little more than one out of three people say yes. When we ask about Wikipedia, we get the exact same answer. So what’s, what’s happening is we have a world where people look at journalists like they look at Wikipedia. “Gee, that’s an interesting fact. I better check it myself.”

ATTKISSON: And what does that tell you?

RASMUSSEN: The media has a huge credibility problem and it’s always had the problem. We talk about it differently today. Now we talk about it as a political bias. I think the issues have always been there. I mean, people were complaining about the bias of Walter Cronkite back in the 1960s.

ATTKISSON: People forget about that.

WALTER CRONKITE: For it seems now more certain than ever that the bloody experience of Vietnam is to end in a stalemate.

ATTKISSON: It is often argued that Donald Trump created this media environment where everybody hates the media. And then others say he simply understood that environment and capitalized on it. Which is it you see?

RASMUSSEN: Oh, people have hated the media for a very long time.

RASMUSSEN: Donald Trump capitalized on that. He understood it, but he’s not the first to do so. The first President Bush, when he was campaigning, he actually got kind of aggressive with, I think it was Dan Rather, during an interview because a lot of Republicans weren’t sure he had the fire to be President.

PRESIDENT GEORGE H.W. BUSH: It’s not fair to judge my whole career by a re-hash on Iran. How would you like it if I judge your career by those seven minutes when you walked off the set in New York? Would you like that?

RASMUSSEN: So he capitalized on that. But all they are doing is tapping into sentiment that’s already there and Donald Trump is playing the media beautifully.

ATTKISSON: Rasmussen says his polling found a good recent example of how many today have come to regard or disregard the national media; the Covington High School pro-life students’ confrontation with a Native American activist at a Washington D.C. protest.

RASMUSSEN: When the story broke of the students from Covington High School, we went out and polled right away when the story first broke and asked people what they thought. And, as you would expect, liberals and conservatives had different views of whether the high school students acted inappropriately or somebody else did.

ATTKISSON: So to summarize, liberals probably thought the high school students who were pro-life behaved inappropriately and aggressively.

ATTKISSON: And conservatives thought the native American was the one who was inappropriate.

RASMUSSEN: Yes. And by the way, conservatives also thought the media was inappropriate.

RASMUSSEN: And then we had a week’s full of coverage. And as you recall, there was a lot more coverage that came out, uh, about the incident.

JIM WILSON, COVINGTON CATHOLIC HIGH SCHOOL PARENT: Our boys did nothing, no violence.

ATTKISSON: I’m surprised by that because some reporters and in the media even apologized that they had been too hard on the children at first or the high school students without knowing the full story.

WHOOPI GOLDBERG: So many people admitted they made snap judgements before these other facts came in.

ATTKISSON: But you’re saying the public at large didn’t change their mind?

RASMUSSEN: That’s correct. The public at large made up their mind. They knew their sources.

ATTKISSON: But the most overwhelming poll results came when we asked about the motivation of political reporters.

RASMUSSEN: 78 percent of voters say that, that what reporters do with political news is promote their agenda. They think they use incidents as props for their agenda rather than seeking to accurately record what happened or report what happened.

RASMUSSEN: Yeah. Only 14 percent think that a journalist is actually reporting what happened.

ATTKISSON: Most people seem to think reporters cannot be fair when it comes to their
chosen political candidate.

RASMUSSEN: If a reporter found out something that would hurt their favorite candidate, only 36 percent of voters think that they would report that.

ATTKISSON: So most people think the reporter would cover it up…

RASMUSSEN: Right, exactly. So voters are looking at them as a political activist, not as
a source of information.

FRANK SESNO: An actual reporter, professional reporter would never do that.

ATTKISSON: Frank Sesno is a former CNN Correspondent and Bureau Chief. As head of the School of Media and Public Affairs at the George Washington University, he routinely confronts declining public trust in the media.

SESNO: The public understands fundamentally what journalism should be. They don’t understand how it’s actually practiced. And that falls to news organizations in my view, to be more creative, more imaginative about how they’re engaging with their publics, to both explain what they do, to defend what they do when it’s controversial, and to be accountable for what they do if it’s wrong.

ATTKISSON: After 2016 when so many of us got the election so wrong, we promised a period of self-reflection and correction, have we done it?

SESNO: No, not enough. If we had done the self-reflection and correction better and more deeply, there would be more reporters reporting from more places across the country talking to more diverse audiences. We would not be so entirely focused, at least in certain media channels and places, on the Trump administration and the outrage of the moment. That being said, there is so much news from this administration. It’s kind of
hard not to do that.

PRESIDENT TRUMP: If we don’t get what we want, I will shut down the government.

ATTKISSON: In the era of the Trump presidency, can you point to a couple of things you think the media has done right?

SESNO: I would start, actually, in the Trump era by calling out NPR. I think NPR has done an exceptional job getting outside of Washington, engaging other voices and people from different sides of the ideological divide to get their sense of what’s happening. I would call out the New York Times and the Washington Post for making remarkable use of multimedia. So there’s a lot of good journalism and good media that’s taking place also that, that extends beyond the Trump administration. There is such a thing as beyond the Trump administration.

ATTKISSON: It may not seem like it as we move quickly into campaign 2020. I guess we should warn people, hang on to their seatbelt with 2020 campaign coming. What do you foresee in terms of media?

SESNO: Yeah, so here’s the next danger. The next danger is everybody walks right off the cliff of coverage like they did last time. Obsessing over, you know, the, the candidate du jour, the moment du jour, how will the media be able to arbitrate this mass of people who all want to be President so that the audience can follow it with some degree of clarity, and so that you neither fall into an oversimplified narrative, or a narrative that just revolves around the melodrama of who’s up, who’s down, and who’s making the most noise or tweeting the most.