It was a round-up of freak-outs on Sunday’s edition of Up With David Gura on MSNBC. Guest host Yasmin Vossoughian and her panel discussed comments made by outgoing White House Chief of Staff John Kelly during a recent interview with the Los Angeles Times. Guests on the panel used the platform to make Trump-Nazi wisecracks and push the false assertion that “there’s no such thing as an illegal immigrant.”

Panelist Elie Mystal of the liberal website Above the Law disagreed with Vossoughian’s characterization of Kelly as the “adult in the room,” describing the Trump administration as “a bunch of complicit people who are all there for their own reasons” and also disagreed with Kelly’s assertion that he had compassion for the economic migrants making their way to the United States from Central America:

ELIE MYSTAL: When Kelly says, oh, I have compassion, that is a lie!...he’s lying. He has no compassion for these people! Look at Trump’s tweets. I think people would be more outraged by them if we reported them in the original German.

Maria Hinojosa of NPR Latino went on a rant scolding Kelly for using the term “illegal immigrant” in the interview: “there’s no such thing as an illegal immigrant, sir, no illegal human being on the planet. Okay?” Vossoughian urged someone to “put the camera directly on Maria” so she could continue with her lecture: “General Kelly, there is no such thing as an illegal human being. How many times do we have to say this? Get your grammar correct.”

This summer, Hinojosa launched into fellow MSNBC guest Matt Mackowiak for that alleged grammar offense, saying "illegal alien" on TV...as he tried to worry about the violence and mayhem committed by MS-13: "I'm not sitting here and saying every single one of their members is an illegal alien." 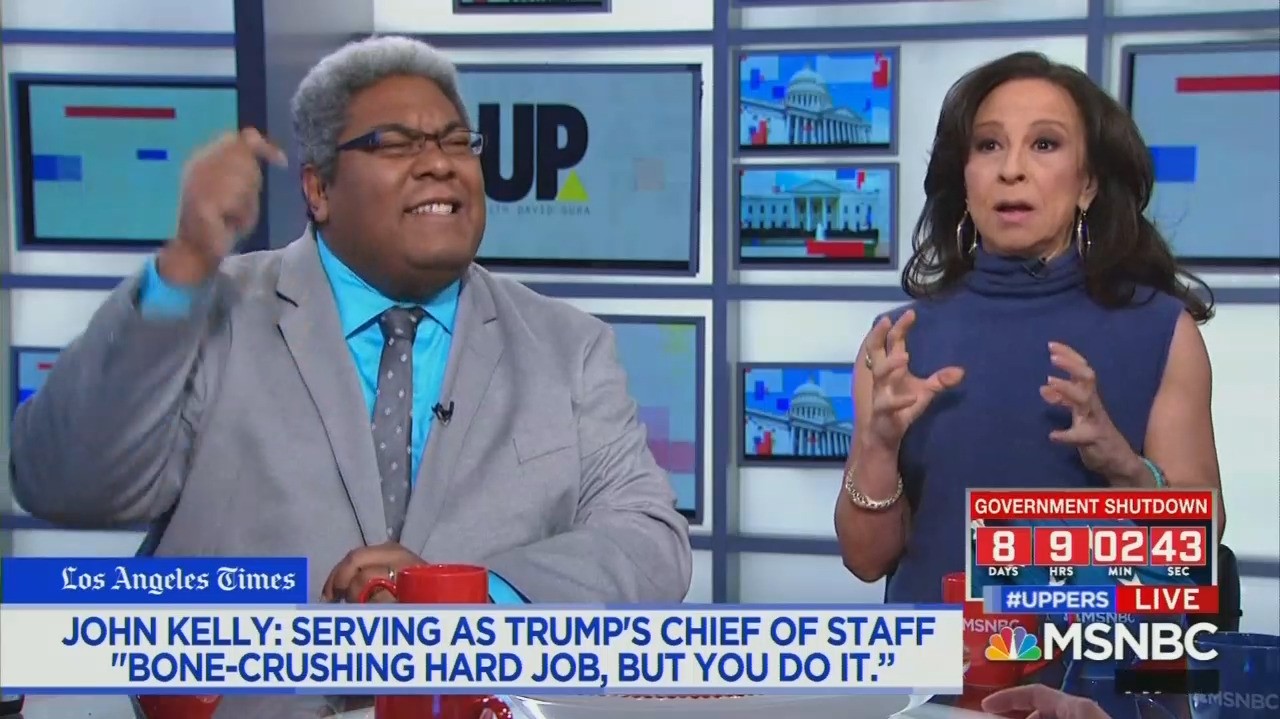 While Hinojosa certainly has a right to dislike the term “illegal immigrant,” she has no basis for calling it grammatically incorrect. She also deserves four Pinocchios for her assertion that “there’s no such thing as an illegal immigrant.”

The crisis on the southern border, including the deaths of two migrant children in the federal government’s custody dominated much of the conversation, with Mystal later slamming President Trump for making “on the fly concentration camps” to house the overwhelming number of migrant children pouring over the border.

MSNBC host Vossoughian went on to complain that “you also have the President simultaneously tweeting out and blaming and politicizing the death of the children and blaming the Democrats for immigration policy.” Vossoughian’s complaint about the politicization of the death of the children came shortly after Mystal played the blame game himself, declaring that “the proximate cause of these children’s deaths is the federal government.”

With 2019 on the horizon, perhaps the media should collectively adopt the New Year’s resolution of not comparing President Trump to Hitler. That’s probably the least they can do to regain the trust of the American public, who sees them as unhinged, left-wing activists badly masquerading as objective journalists.

A transcript of the relevant portion of Sunday’s edition of Up With David Gura is below. Click “expand” to read more.

Up With David Gura

YASMIN VOSSOUGHIAN: Joining me now this hour, MSNBC Legal Analyst Katie Phang, Matt Welch, a Contributor for The Los Angeles Times and Editor-at-large for Reason magazine, Elie Mystal, editor of abovethelaw.com and Maria Hinojosa, did I say that correctly?

MARIA HINOJOSA: You said it perfectly.

MATT WELCH: Yeah, this would be a great way for Trump to pivot and make this thing stop. Right? He’s given Donald Trump an out.

WELCH: Trump has actually hinted at this, talking about slats and drawing diagrams of a fence that’s…no one has ever seen the plans for apparently earlier. The thing that I’m really struck by by the Kelly interview is more to do with Afghanistan…

WELCH: …which is to say that he posits himself as the adult in the room preventing us from withdrawing too early from Afghanistan. We have seen this a lot with Jim Mattis and other people like this. I think it’s a moment to reflect, which is to say, why is it that elite military, elite establishment, elite commentary, the moment that they freak out about Donald Trump, isn’t the ten lies a day, isn’t the family separation, isn’t this, that and the other. It’s when we withdraw 4,000, 2,000, 7,000 troops from places that they have been for 17 years. This is ridiculous to me and I think we should think about that as we’re criticizing.

VOSSOUGHIAN: Well and it’s interesting to say the least considering the fact that he is a general and he… and when it came to obviously troops overseas, he was, it seemed as if to be the adult in the room, Elie, because he had said that he didn’t want troops withdrawn from Afghanistan, he didn’t want troops withdrawn from Syria and lining up with the timing he made…the President made his decision about Syria right after the announcement, basically a couple of weeks or so after the announcement that John Kelly was leaving the White House as Chief of Staff.

MYSTAL: Yeah, I reject this notion that there are any adults in the room. Okay? Like, what I think is happening is a bunch of…

VOSSOUGHIAN: Now or then?

MYSTAL: What we have…

HINOJOSA: I just want to say I agree.

MYSTAL: What we have is a bunch of complicit people who are all there for their own reasons so they all have their pet issues that they care about. Maybe for Kelly, it was Afghanistan. Maybe for, you know, who knows what Jared wanted or what Sarah Huckabee Sanders wants. They all have their pet issues but nobody is willing to do the hard work of standing up to this President and stopping him. When you look at his tweet…and like when Kelly says, oh, I have compassion, that is a lie. That is…

MYSTAL: But he’s lying. He has no compassion for these people. Look at Trump’s tweets. I think people would be more outraged by them if we reported them in their original German. He is blaming…

VOSSOUGHIAN: But Kelly in this interview, to give him the benefit of the doubt, in the interview, he does address the situation that is happening in Central and South America.

VOSSOUGHIAN: Which is…but think about this. It’s interesting to see an interview like this where he addressees the issue and says we have to, we have to sort of build up the economies in the countries in like that, when you have a President who you used to work for, you know, tweeting out a couple of days ago or so, where he says he’s going to withdraw funding from countries like Guatemala and Honduras unless they do something to stop these immigrants from coming to our country.

HINOJOSA: I mean, can we just remember that John Kelly didn’t just appear on the scene. Okay? He was involved with the Southern Command. Southern Command oversees all of the military operations from Mexico to the point of Argentina, the most southernmost point. So you’re thinking what does that have to do with it? That means that he understands exactly what’s been happening with Central America; not over the past five years or the past ten years. We’re talking about the past 100 years or let’s just say since the mid 1980s when the United States was sending over a million dollars a day into El Salvador. So why am I bringing this up? Because it’s all connected. For him to kind of say like, oh, you know, I care so much. By the way, he didn’t…in that interview, he immediately says…first of all he calls them illegal immigrants. There’s no such thing as an illegal immigrant sir, no illegal human being in the planet. Okay?

VOSSOUGHIAN: Someone put the camera on Maria because she’s talking directly to…

HINOJOSA: General Kelly, there is no such thing as an illegal human being. How many times do we have to say this? Get your grammar correct. Okay? But immediately he says illegal immigrants they’re not bad people. I have nothing but compassion. Right? But then he…right then he says but he blames immigrants for the fact that they are coming, for the fact they are dying. He basically turns and blames them. He has a broader understanding of the historical context and he’s not showing it to us and what he does reveal and this is why inside the mail room I was very upset. I was saying words that I can’t say here…

HINOJOSA: …because I have zero tolerance for people who continually lie about these things. And frankly…

VOSSOUGHIAN: So do you think Kelly is lying in this interview?

VOSSOUGHIAN: He blamed Jeff Sessions for the zero tolerance policy.

KATIE PHANG: He did. He punted it. And that is a typical White House…this administration is specializing in the punt, to pass on the buck to somebody else. But what’s important is, Matt brings out the point, it’s Afghanistan. There’s a tipping point and Elie says as well. There’s a tipping point for every member in this administration, regardless of what youe role is, in terms of where you just say enough is enough is enough, enough, right? That’s a song. But people are needing to remember these are children that are dying. Whether you want to be indifferent to the plight of a Central American coming to the United States fleeing persecution, these are children. So I don’t care…what is it a steel slat, a concrete wall. I don’t care. These are children, who from a legal standpoint, the government’s been aware of the conditions that are happening at the borders for months.

PHANG: They have known so long what’s been happening with these children who come here. And that’s why it’s important for people to remember it’s irrelevant whether or not Kelly now wants to take a stand via an article about where he was and say, well, I was the adult in the room and I’m the one who gave counsel and if Trump wanted to ignore it, it’s on Trump; again punting it to someone else. There are children that are dying. And so it’s really important for people to understand, whether you want to blame it’s the parents that are coming to the United States with these children. Something needs to be done about it and as Maria was saying, he’s known for a long time about the conditions in Central America that would be the genesis for this.

MYSTAL: Trump, Trump has made these on the fly child, child concentration camps on top of facilities that are not meant to house children and they have provided none of the essential services that children need so that they can live while they’re under captivity.

VOSSOUGHIAN: And when you have Secretary Nielsen visiting the border because she wants to revisit what’s happening with regards to medical care with that a lot of these children that are approaching the border, you also have the President simultaneously tweeting out and blaming and politicizing the death of the children and blaming the Democrats for immigration policy.