On MSNBC, Michael Moore Rants Millions of 'Racist' Trump Fans Must Be 'Shunned'

During MSNBC’s The Last Word With Lawrence O'Donnell on Wednesday, guest host Ali Velshi engaged in a lengthy interview with far-left documentary filmmaker Michael Moore. Velshi channeled his inner Hillary Clinton, referring to a large share of the American public as “angry, intolerant (and) hard to reconcile.” These comments present an eerie similarity to Hillary Clinton’s infamous dismissal of half of Trump supporters as “irredeemable” members of a “basket of deplorables.” Moore’s suggestion that the “quarter of the country” brought up by Velshi should be “shunned” also has a striking similarity to Clinton’s declaration that “you cannot be civil” with Republicans.

Velshi asked Moore “how much intolerance do we tolerate in order to build bridges of empathy, to talk to people who are legitimately angry?” Moore responded: “You can’t build a bridge to a racist or a misogynist...they have to be shunned and treated like we treated smokers twenty years ago.” Moore did extend an olive branch to “Republicans who do care about this country, who are not bigots, they’re just rightfully angry,” urging them to “give these Democrats who just got elected a shot.”

A good portion of the interview focused on the results of the 2018 midterm elections. Moore and Velshi gleefully ran through a list of historical candidates elected to office as Democrats this year; including a gay Governor-elect in Colorado, a “lesbian Native American, mixed martial arts fighter” Congresswoman-elect in Kansas, and a “bisexual Senator.” Not surprisingly, Moore and Velshi, like many of their counterparts in the media, forgot to mention all of the historic firsts on the GOP side, including the election of female Governors in Iowa and South Dakota, the election of the first female Senator in Tennessee history, and the election of the first Latina Lieutenant Governor of Florida.

Moore argued that in response to the midterm election results, the leadership of the Democratic Party should understand that “the country has changed” and Moore advised the Democrats to “come along with the change here. Don’t hold back. Don’t think anymore, well, we can have half health care. No, we need…universal health care for everyone.” Velshi agreed, saying the United States should embrace universal healthcare “like every developed country in the world.”

Sadly, Velshi and Moore join a long list of media personalities who have dismissed the Republican electorate as racist. On a recent episode of Real Time With Bill Maher, host Bill Maher referred to Republicans and Trump supporters as “stupid and racist” while guest Thom Hartmann referred to them as “rubes.” When asking guest Michaela Angela Davis if she thought “all of the people that voted for Donald Trump are racist,” New Day co-host John Berman could not believe it when she responded: “absolutely, yes.”

With a brand new year right around the corner, maybe the media and the left should adopt a New Year’s Resolution of refraining from smearing their political opponents as racists and misogynists. Otherwise, members of the “basket of deplorables” will rightfully see no need to “give these Democrats” who seem to hate them “a shot.”

A transcript of the relevant portion of Wednesday’s edition of The Last Word is below. Click “expand” to read more.

The Last Word With Lawrence O’Donnell 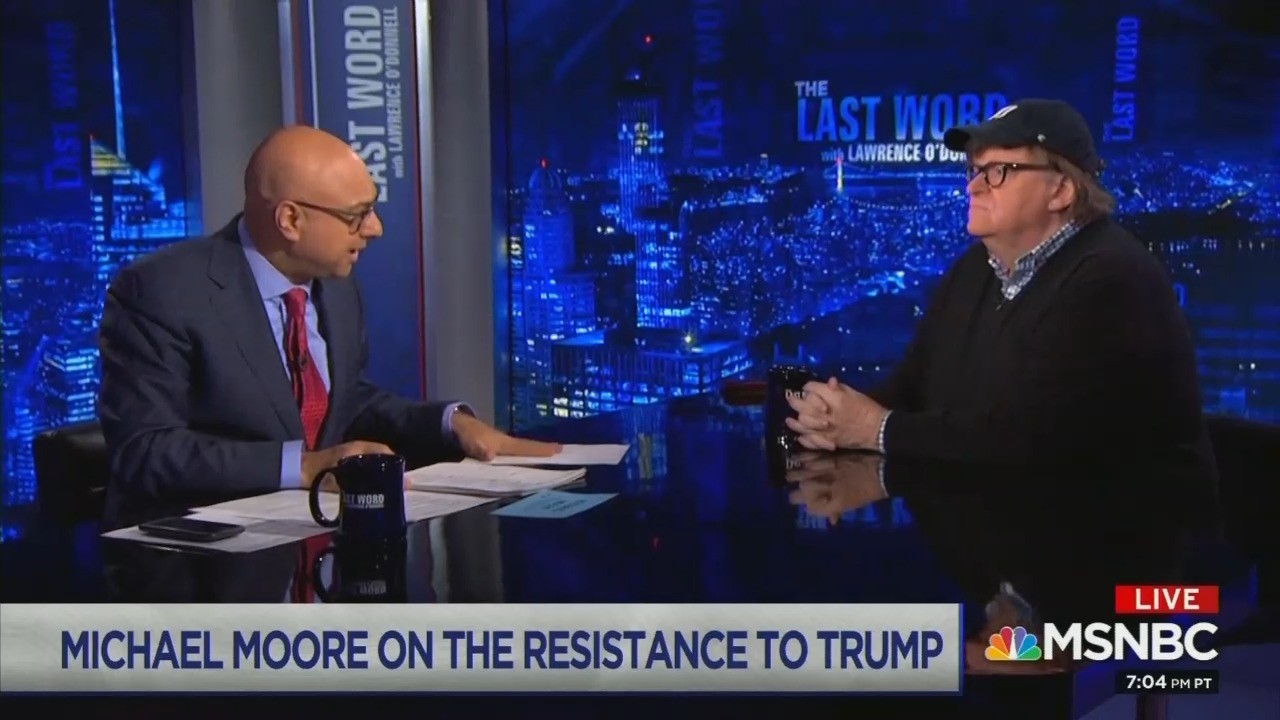 MICHAEL MOORE: He’s helped to blow up pieces of our democracy, and it hasn’t benefitted anybody. And nobody’s made any money off his tax cut and they can, he can point to the stock market all he wants but that doesn’t affect that person…

ALI VELSHI: More than half of American don’t own stocks.

MOORE: I mean, think about this, people in Kansas said to themselves what could I do now to send a message? I know, I’m going to send a Congresswoman who is a Lesbian, Native American, mixed martial arts fighter…

VELSHI: And that happened in a lot of places in America.

MOORE: In a lot of…Oklahoma City sent a Democrat. Utah today that was called.

VELSHI: A gay Governor in Colorado, a bisexual Senator, a Muslim refugee.

MOORE: Because the country…the country has changed. And this is what I say to the leadership of the Democratic Party. Please understand, it’s changed. Come along with the change here. Don’t hold back. Don’t think anymore, well, we can have half health care. No, we need full, full universal health care for everyone.

MOORE: …Universal health care. Oh, and the other thing, too, hunting is the number one sport in Canada; more so than hockey.

MOORE: There are 7 million registered guns in the nation of Canada, which only has 34, 35 million people,

MOORE: Nothing, nothing. All right, so clearly you figured out how to deal with this issue.

MOORE: We need to show some humility and say, you know, we’re so, we’re so confident about our goodness here at this Thanksgiving, that we need to reach out to others and say how did you do this? How do you do that without mass shootings in Canada? How do you, how do you pay for it? Everybody gets to see a doctor and that ends up with you Canadians living…not you, you’re an American, now, but hang onto your Canadian passport.

MOORE: Plan B, Plan B, Ali, just saying. But you live three to four years longer than we do on average.

VELSHI:  Right. Every, almost every outcome in health is better in other OECD countries for less than half the cost that Americans pay.

VELSHI: So let me ask you a question, a third of the country, a quarter of the country, angry, intolerant, hard to reconcile. But what do the rest of us have to do? How much intolerance do we tolerate in order to build bridges of empathy, to talk to people who are legitimately angry, maybe not for the reasons that we believe but they really are angry? They’ve not seen their wages go up while home prices go up and stock prices go up and the rich get richer, they see their, their incomes…you’ve studied this. You’ve done films about this.

MOORE: You can’t…first of all, it’s hard…you can’t build a bridge to a racist or a misogynist, you know, they have, they have to be shunned and treated like we treated smokers 20 years ago, ten years ago. You know, I walked down the street the other day with my sister and I said let’s just see how long we can go before we see somebody smoking; not the people sitting outside the buildings desperate to grab five minutes. But literally walking down the street, we walked 10, 20 minutes, there was never a… not a smoker.

Racists and misogynists shunned, but the, but the but    conservatives, Republicans whatever who do care about this country and who are not bigots, they are just rightfully angry, we can reach out to them and say come on, it’s…we can create a good, give us a chance, we’ll create this good America, and it’ll look like the real America. Congress now does look more like that on the Democratic side. We’ll build a better country. And we can and when we have Thanksgiving together in years in the future, you know, we can have our disagreements. We can have a great debate. But in the end, we all love this country, and we’re going to sink or swim together and I don’t think any of us want to sink. So we need to come together on this. And my request to the conservatives who might be watching is, is give this a shot. Give these Democrats who just got elected a shot, and we’ll get back in the White House and the Senate in 2020, and we’ll…we will build a country where your house isn’t on fire or going to go into the ocean in a mudslide.