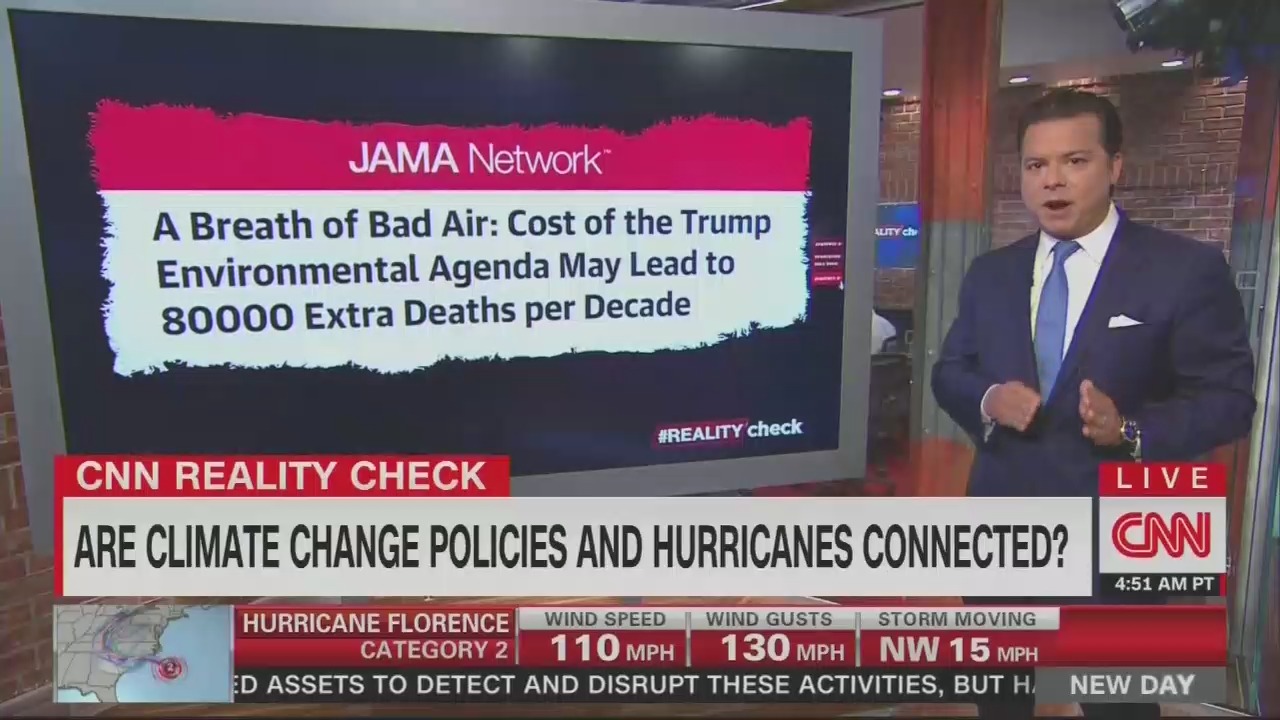 While the coverage of Hurricane Florence has increased as the storm’s landfall on the Carolina coast became imminent, that did not necessarily mean that the media rolled back their negative coverage of the Trump administration.  On CNN’s New Day, John Avlon cited two Harvard scientists who argued that President Trump’s environmental policies will cause 80,000 unnecessary deaths every decade.

Avlon hosted a “reality check” addressing the claims of a Washington Post article arguing that President Trump is “complicit” in the damage that will be caused by Hurricane Florence. Avlon opened the “reality check” by saying “while President Trump has been talking up our preparedness, his policies have been tearing down our defenses to climate change, which is often to blame for extreme weather.” He went on to slam the Trump administration for rolling back regulations of methane in addition to its decision to withdraw from the Paris Climate Accord, dismantling the Clean Power Plan, and expanding offshore drilling.

Avlon cited a study from two Harvard scientists finding that “Trump’s environmental policies could lead to 80,000 unnecessary deaths every decade.” Avlon did not just direct all of his fire at Trump; he seemed to imply that the North Carolina legislature has blood on their hands thanks to a decision to pass a bill “explicitly ignoring climate science” in an effort to “boost development along the coast,” saying “short-term thinking isn't sufficient to deal with long-term problems.”

Avlon concluded his lecture on climate change with a call to action: “This isn’t rocket science, folks, it’s climate science. As long as we continue to aggressively ignore it, the costs in lives and dollars will only escalate.”

CNN and Avlon hardly find themselves the only members of the media to effectively blame President Trump for Hurricane Florence. According to MSNBC’s Katy Tur, “mounting evidence suggests it could be incredibly difficult to deal with this disaster if climate change deniers are on the front lines of emergency response.”

While the media readily pounced on the Federal government and the Trump administration over their handling of Hurricane Maria, which caused an extensive amount of damage in Puerto Rico last year, they could not bear to give the Federal government credit for the billions of dollars in aid it gave the island territory following the storm.

Last year, when the President and First Lady headed down to Texas to survey the damage from Hurricane Harvey, the media obsessed over First Lady Melania Trump’s choice to wear high heels when boarding Air Force One en route to Texas and criticizing President Trump for not visiting enough of the flood-ravaged areas in the immediate aftermath of the hurricane.

The media also made sure to obsess over climate change in the days prior to Harvey’s landfall, proving that they all read from the same script.  Anyone who knows how the media operates should have definitely seen Avlon’s lecture on climate change coming from a mile away.

While Hurricane Florence will come and go, the media’s obsession with making President Trump look bad and tying hurricanes to climate change will continue unabated. Expect them to scrutinize every last aspect of the Trumps’ wardrobe, body language, and everything else in the event of a trip by the First Family to the Carolinas.

A transcript of the relevant portion of New Day is below. Click “expand” to read more.

ALISYN CAMEROTA: Now, it is time for a CNN “Reality Check” as Florence bears down on the Carolinas. A damning Washington Post editorial is calling President Trump “complicit” in this storm…not for failing to prepare but for failing to address climate change. So, Senior Political Analyst John Avlon has more for us. What do you see, John?

JOHN AVLON: That’s right, Ali. Look, President Trump has been reaching for storm superlatives, as he is one to do…the biggest, the worst, the most dangerous, and who can forget, tremendously wet. But while President Trump has been talking up our preparedness, his policies have been tearing down our defenses to climate change, which is often to blame for extreme weather.  In fact, on the very same day Trump was discussing Florence from the Oval Office, his EPA proposed rolling back restrictions on emissions of methane, which is 25 times worse than carbon dioxide when it comes to climate change. And that’s just the latest environmental party, policy targeted by the Trump administration.  According to a July study from The New York Times, nearly 80 regulations could be on their way out. They include everything from no longer requiring chemical companies to report leaks, to cutting cars and trucks’ fuel efficiency, pulling the U.S. out of the Paris Climate Accords, dismantling the Clean Power Plan, and opening nearly all our coastline to offshore drilling. It’s so bad that according to two Harvard scientists, Trump’s environmental policies could lead to an additional 80,000 unnecessary deaths every decade.  Not convinced about the connection between climate change and extreme weather? Well, warmer water means more intense storms. And when President Trump called Hurricane Florence tremendously wet, he was actually onto something.  The amount of precipitation in our worst storms increased nearly 20 percent between 1958 and 2007, according to one scientific study. And the relative number of these extreme storms is also up about 40 percent in that same period.  But you don’t need to be a tree hugger to recognize the cost of climate change. Here’s a stat that will get the attention of even the most committed capitalists. The total cost of U.S. hurricanes this decade is more than $343 billion…that’s with a “b.”  And southern states, the heart of Trump’s base, are the ones that have sustained the most damage and will likely face the greatest costs in the future.  Now, just last month, the Richmond Fed released a report that found “evidence that higher summer temperatures could reduce overall U.S. economic growth by as much as one-third over the next century, with southern states accounting for a disproportionate share of that potential reduction.”  And in 2012, North Carolina lawmakers passed a bill explicitly ignoring climate science, forcing officials to work from outdated predictions of sea level rise rather than the latest figures which are more dire. Their stated motive? To boost development along the coast, which is exactly where Florence is headed.  Short-term thinking isn’t sufficient to deal with long-term problems. And here’s a final stat that should get your attention. We found out late last month that the oldest ice in the Arctic is breaking up for the first time ever in a development that one scientist simply called scary.  This isn’t rocket science, folks, it’s climate science. And as long as we continue to aggressively ignore it, the cost in lives and dollars will only escalate.  And that’s your “Reality Check.”