On Tuesday, Politico and writer Annie Karni provided the latest installment of why people hate the media as she published a story entitled “Melania's stiletto sideshow,” symbolizing the media’s hissy fit when First Lady Melania Trump wore stilettos upon leaving Washington for the hurricane-ravaged Texas.

With people needing rescue and even dying as the flood waters continue to rise in and around Houston, Karni and other journalists (exposed in other stories here and here) seem to be most concerned about what the First Lady was wearing. Pathetic.

The outlet’s Twitter page tweeted a link to the nearly-900-word piece with an even more tone-deaf caption that’s since been deleted: 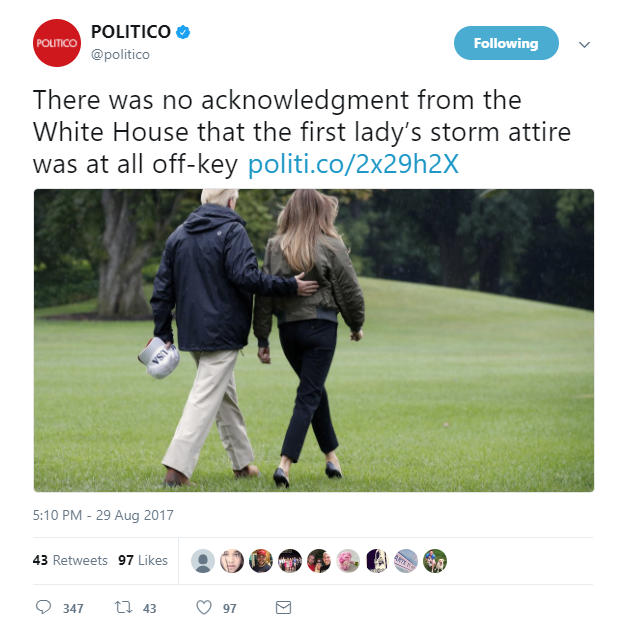 Karni’s piece wasn’t much better. She began by stating that Melania “often lets her fashion choices” do the talking and spending two paragraphs digging back to past fashion statements and how she’s been reluctant to be in the spotlight.

Only then did Karni actually shift gears to Tuesday and showed not only her liberal bias but a lack of acknowledgement that most people travel with more than one pair of shoes:

But on Tuesday, she appeared to put the wrong foot forward when she boarded Marine One, en route to visit emergency responders in hurricane-ravaged Texas, wearing towering black snakeskin stilettos.

The emblematic first image of the first lady heading off to visit a hurricane in heels – a moment that the president has seized on as an opportunity to project strength and show off decisive leadership – instead became another symbol of a White House that can often seem out of touch.

Melania changed out of those stilettos upon leaving the rainy-but-not-stormy Washington and into sneakers for her time visiting south Texas.

Like she was serving as a flack for the Democratic National Committee (DNC), Karni promoted the gloating of former Obama adviser Valerie Jarrett and lamented that “[t]he heels at least temporarily stole the spotlight from a gloomy president who aides said has been buoyed by what he sees, so far, as an effective coordinated response to a record-breaking storm.”

Only footnoting Michelle Obama wearing an expensive set of shoes to a Washington D.C. foodbank in 2009, she touted fellow lefty Jamil Smith and seemed to insinuate that only did the internet outrage cause her to change but this was a pattern of bad behavior:

“Small gestures send big messages,” journalist Jamil Smith wrote on Twitter, regarding the first lady’s shoe choice. “It isn’t that they keep getting it wrong. They don’t care about getting it right.”

On board Air Force One to Corpus Christi, as the picture of the delicate heels ricocheted         across the Internet, Melania Trump changed into a pair of bright, white sneakers, which looked fresh out of the box.

She wasn’t the only female member of the Trump delegation wearing questionably appropriate footwear – two other women were spotted on Air Force One wearing pumps and suede heels.

The debate over the first lady’s shoes wasn’t an isolated fashion faux-pas for the women who act as the face of the Trump administration.

Instead of reworking the story to include reaction from the First Lady’s office, Karni tacked that part onto the bottom of her story and even then she couldn’t simply report the quotes without a few jabs:

There was no acknowledgment from the White House that the first lady’s storm attire was at all off-key. Instead, her staff blamed the media for creating a “sad” side circus to an otherwise somber day.

“It’s sad that we have an active and ongoing natural disaster in Texas,” said Stephanie Grisham, a spokeswoman for the first lady, “and people are worried about her shoes.”

Later Tuesday, the first lady’s office released a statement on the storm. “I want to be able to offer my help and support in the most productive way possible, not through just words, but also action,” the first lady said. “What I found to be the most profound during the visit was not only the strength and resilience of the people of Texas, but the compassion and sense of community that has taken over the state. My thoughts and prayers continue to be with the people of Texas and Louisiana.”

Whether it was Slate, Vanity Fair, Huffington Post editor Philip Lewis, Time’s Ryan Teague Beckwith, or Karni’s Politico colleague Ben White, Tuesday showed that many in the national and political media have no foresight for what actually matters.

Liberal media defenders can claim that such criticism is delegitimizing the news media and that’s not what NewsBusters is dedicated to be doing. Rather, we’re simply bringing to light stories like these in which the media have done themselves a disservice to the public. And that’s exactly what this Politico story represented.