Breaking news...CNN has finally found someone to interview besides Michael Avenatti. During Sunday's edition of CNN's Reliable Sources, host Brian Stelter sat down with Trevor Noah, host of Comedy Central’s The Daily Show. Noah did not hold back when talking about President Trump, comparing him to an African dictator and a deadly asteroid hurtling toward Earth shaped like a penis.

Noah, originally from South Africa, wasn't exactly famous when he first began hosting The Daily Show in 2015; following the departure of longtime host Jon Stewart. While the show airs on Comedy Central, The Daily Show, like many other late night comedy programs, has become basically indistinguishable from an MSNBC primetime show.

Stelter began the interview by asking Noah “is this starting to feel like home for you?” Noah responded in the affirmative, adding “were it not for the Trump presidency, it may have taken me a lot longer to feel like this was home.”

Stelter then asked Noah to weigh in on the news that President Trump’s personal attorney Michael Cohen had received payments from companies including AT&T. Noah said that the revelations did not surprise him at all: “I said from the very beginning that Donald Trump reminds me of an African dictator. And if you know anything about African dictators, the first thing you have to do is follow the money. And you follow the money with the people closest to them, family members, business associates.”

Noah previously compared Candidate Trump to a series of African dictators, from Idi Amin to Robert Mugabe, during his first week as host of The Daily Show. 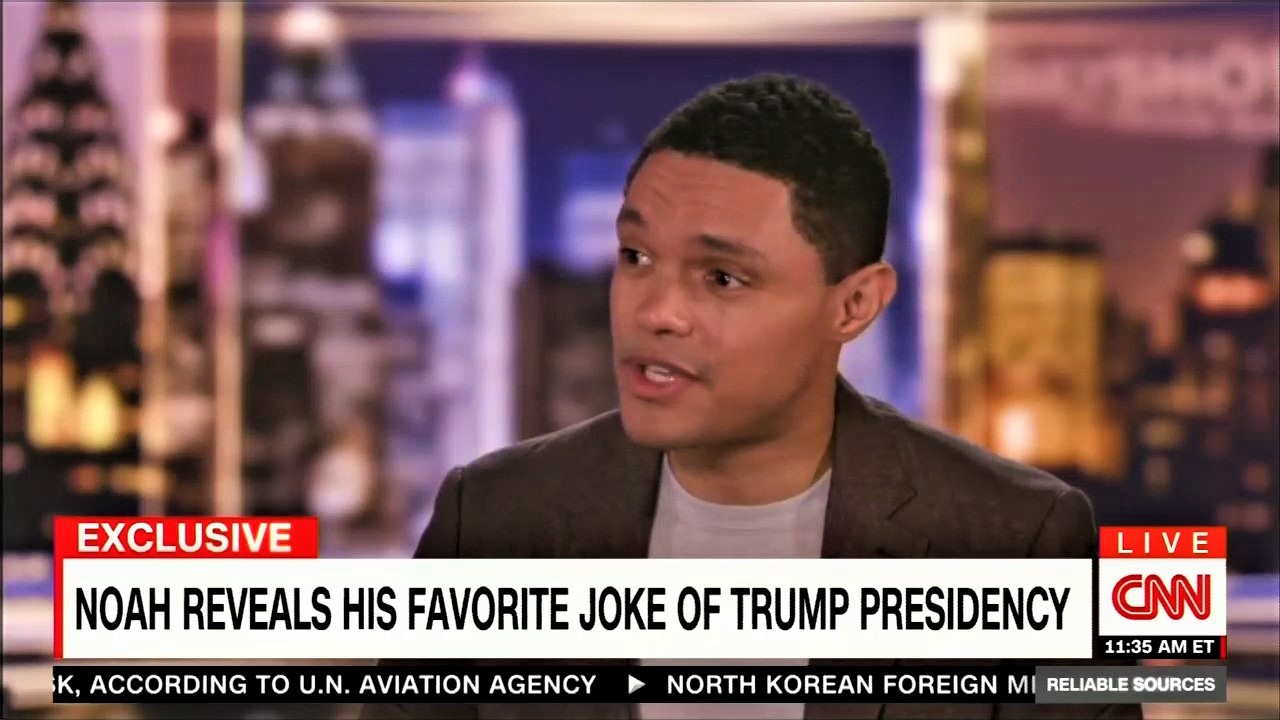 After discussing how Noah selects topics to discuss on his show and prognosticating about President Trump’s re-election prospects, Stelter concluded the hard-hitting interview by asking Noah if he had “a favorite joke about the President.”

Noah responded by painting a graphic picture in the minds of CNN viewers who don’t necessarily watch his edgy TV program: “I wake up most days terrified at the notion that Donald Trump is the most powerful President in the world. I also wake up most days acknowledging that he’s also going to make me laugh. And that’s what’s difficult for me, is that he’s an emotional paradox. And I have come to realize it’s like this. I think it’s almost like there is an asteroid headed towards the Earth, but it’s shaped like a penis. I think I’m going to die, but I know I’m going to laugh.”

The network that organizes hours of outrage around dismissing John McCain as irrelevant thinks it's rib-tickling that the president is compared to a penis-shaped asteroid of death.

Such an off-color discussion on CNN should not come as that much of a surprise, especially considering the fact that on-air personalities at the network uttered the word “sh**hole” nearly 200 times on the day following President Trump’s alleged use of the profanity to describe impoverished countries in Africa and Latin America.

In the end, it looks like CNN and Trevor Noah have a lot more in common than one would think. Both seem to think that President Trump represents an existential threat to American democracy. Noah’s program talks about many topics that one would expect to hear about on a cable news network while CNN has spent a lot of its on-air time devoted to gossip and hyperbole that one would normally expect to see on a show like Noah’s, especially with regards to the Stormy Daniels saga. Considering the revolving door between journalism and entertainment, it would not come as that much of a surprise if Stelter made an appearance on The Daily Show in the very near future.

STELTER: It’s been a swampy week of revelations about Michael Cohen’s consulting deals with companies like AT&T. Now, that’s of the things I asked Trevor Noah about when I sat down with him on the set of “The Daily Show.” He made a joke about how Cohen was running swamp tours. Noah and I had a wide-ranging conversation about Trump and comedy and also about what Noah still wants to know.

STELTER: Trevor, thanks for sitting down with me.

TREVOR NOAH: Thank you again, Brian. Good to see you.

STELTER: Is this starting to feel like home for you, now that it’s been a few years?

NOAH: I think it’s felt like home for a while now. And I think home has been less defined by the space and more the people. I think, were it not for the Trump presidency, it may have taken me a lot longer to feel like this was home.

STELTER: And in the first few months of the Trump Presidency, I know your writers and you all were scrambling to redo the show at the last minute. Is that still happening 16 months in?

NOAH: Yes, but we don’t scramble anymore. Now we expect it.

STELTER: Now you plan for it.

NOAH: Right. So, now we plan for the unplannable.

NOAH: We wait for the moment when Wolf Blitzer goes “Breaking news.” We're waiting for that moment, because it happens almost every single day. It’s the 5:30 curse, we call it. And so...

STELTER: The news about Michael Cohen getting payments from companies, it did break between 5:00 and 6:00 p.m. this week.

STELTER: Did it surprise you?

NOAH: No, it didn’t. I said from the very beginning that Donald Trump reminds me of an African dictator. And if you know anything about African dictators, the first thing you have to do is follow the money. And you follow the money with the people closest to them, family members, business associates. All you do is watch for the money. And I would have been disappointed had we not found out or had Michael Cohen not done this. I’m like, yeah, this is following the script. This is what you were meant to be doing as the person who rolls with Donald Trump. You are always going to be finding a way to swindle cash. And now the question really that remains is, did Trump know? And did these companies really not get anything? Because I feel like that’s a quick way for the stories to just disappear. Yeah, yeah, yeah, we paid him, we didn't get anything. Let’s – let’s move along. Let’s move on.

STELTER: It sounds like you bring that idea to this.

NOAH: Well, I think you -- as a, as a person who processes information in the world, good journalists help you think of how to process a story. I think, as a critical thinker, you should be able to do these things beyond journalism. You know, I think we should be trying to build a population of people that are looking at information, that are reading into information, people who are asking questions that go beyond what they are just told.

STELTER: And where do you see your show fitting into that?

NOAH: Well, it's always evolved, you know? When I started “The Daily Show,” I thought our purpose was just to make jokes about what’s happening, because that's what the world felt like. It was a benign existence under Barack Obama. I think, as the world comes to change, our purpose in that world changes. And I think that happens not just because of “The Daily Show,” but because of how comedy changes in society, depending on what is happening to that society. So, when society is experiencing a boon or if it is a wonderful time for people to be alive and there's not much strife, I generally find the comedy will be benign, and it will be, you know, observational and, you know, really light in its touch. As things become scarier, as the world becomes less secure, as people question, you know, the security that they exist within, that’s when comedy becomes more cutting, because, in many ways, it’s the release valve to that fear or to that tension.

STELTER: You have some of the same challenges that I have. There might be a dozen stories in a day about Trump or about politics. How do you go about deciding which are worthy of talking about?

NOAH: Well, I break it down into categories. I go, what's newsworthy? What is interesting? What is entertaining? And what is original? Because I’m going to be on “The Daily Show” every single day of the week, four nights a week, it’s nice to vary my material. It’s nice to switch things up. I don’t want my audience to tune in every day and feel like they’re hearing the exact same story. And so, you know, as much as I can do, I don’t talk about Trump, you know. He makes it extremely difficult, as you know...

NOAH: ... you know, because he -- he -- and I have heard from many people that he purposefully wants to be in the news. So, it’s difficult to avoid that when the person is the President of the United States.

STELTER: I think we have had this debate privately. Maybe we should have it publicly.
You think Trump will be reelected if he decides to run, right? You think he’s going to be with us for a long time.

NOAH: I think people underestimate how laser-focused Trump and his supporters are.
I think people also underestimate how many people in America are willing to accept the adverse effects of Donald Trump as they pertain to the general discourse in America, vs. the economy and how people actually feel in their daily lives. So, it’s -- it goes back to, you know, what Joe, Joe Biden was talking about, where he was saying affected vs. offended. And that's what's happened with a lot of Americans. There are many people who go, I’m offended by Donald Trump, but I’m not actually affected by him. I think too many people take for granted the ability Democrats have in to step in their own way and trip themselves at the finish line. I don’t take any of that for granted.

STELTER: All right, really hard last question. Do you have a favorite joke about the President?

NOAH: I think my favorite joke that encapsulates how I observe and process the Donald Trump Presidency is this.

NOAH: I say, I wake up most days terrified at the notion that Donald Trump is the most powerful President in the world. I also wake up most days acknowledging that he’s also going to make me laugh. And that’s what’s difficult for me, is that he’s an emotional paradox. And I have come to realize it’s like this. I think it’s almost like there is an asteroid headed towards the Earth, but it’s shaped like a penis. I think I’m going to die, but I know I’m going to laugh.

NOAH: Could be both.