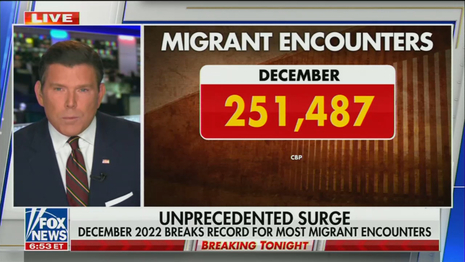 It’s a longstanding trick used by administrations hoping to bury bad news: dump it on a Friday night, knowing that weekend news staffs are thin and audiences are smaller than during the week. The news media are not oblivious to this, and have often chosen to push back at politicians’ attempt to manage the news by hammering such a bad news story even harder.

That’s not what happened this weekend, though. This weekend, the networks did exactly what the Biden administration hoped they would do by barely covering a devastating report about the crisis at the U.S.-Mexican border.

Friday evening, U.S. Customs and Border Protection disclosed that there were a record 251,487 border encounters in December, bringing the total for the calendar year 2022 to a whopping 2,577,669 — more than the population of fifteen U.S. states. And that doesn’t count the estimated hundreds of thousands of additional migrants who are believed to be “got aways,” i.e., those who successfully evaded an encounter with CBP.

These numbers show how badly the Biden administration has botched the border, so the administration delayed their release until nearly 7pm Friday. Even at that hour, of course, it’s possible for a newscast to shift its plans to mention news if the journalists think it’s important enough. That’s what FNC’s Special Report did on Friday, at 6:53pm ET, the tail end of their program. Host Bret Baier said the number of migrant encounters in December made it “the busiest month ever recorded by Customs and Border Patrol.”

But ABC’s World News Tonight, the CBS Evening News and the NBC Nightly News stuck to their planned newscasts and said nothing about this bombshell. Here’s what happened the rest of the weekend: 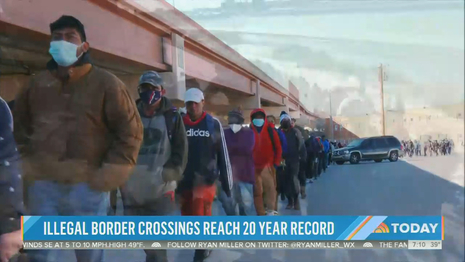 ■ Saturday Morning, January 21: By the time their morning shows aired at 7am ET, all three broadcast networks had hours to digest this new report, yet neither ABC’s Good Morning America and CBS Saturday Morning bothered to mention it. NBC’s Today, however, carved out 25 seconds for a brief headline read by fill-in anchor Joe Fryer. Here’s the complete transcript (it won't take long to read it):

JOE FRYER: Illegal crossings at the U.S.-Mexico border last month surged to a record number since President Biden took office. The government says it stopped migrants more than 250,000 times along the border, up 40% from the prior December. The extraordinary influx came shortly before Mr. Biden introduced measures to deter migrants from Cuba, Haiti, Nicaragua and Venezuela. Republicans say his lax border policies have led to the flood. 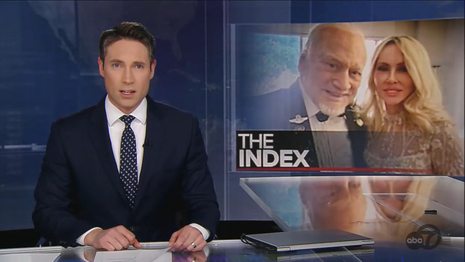 ■ Saturday Evening, January 21: On the East Coast, NBC Nightly News was pre-empted for NFL football. For the second night in a row, both ABC and CBS decided to ignore the news, although both World News Tonight and the CBS Weekend News found time to tell viewers about another breaking news story — word that Apollo astronaut Buzz Aldrin had married again at the age of 93.

■ Sunday Morning, January 22: None of the three morning shows — Good Morning America, Sunday Today and CBS Sunday Morning — mentioned the CBP report. Neither did any of the three political discussion shows, although on CBS’s Face the Nation, GOP Congressman Mike Turner got in a quick mention of how we have “record people crossing our borders” right before the end of his interview with moderator Margaret Brennan. 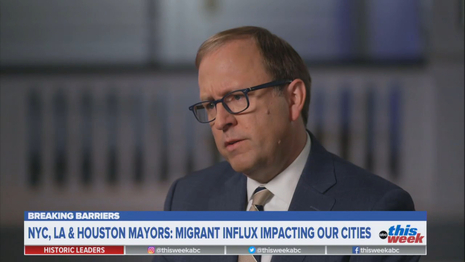 ABC’s This Week and CBS’s Face the Nation also had general discussions of the border crisis with several big city mayors, without any reference to the new CBP report. ABC’s Jon Karl talked to a panel of all-Democratic mayors (Eric Adams of New York City, Karen Bass of Los Angeles, and Sylvester Turner of Houston) in a clearly pre-taped segment. Karl’s toughest question: “Does something need to be done, though, to slow the flow of migrants over the border?”

CBS’s Brennan even suggested the President was actually getting tough on the issue, asking Miami’s Republican Mayor Francis Suarez: “Are these new tighter regulations from the Biden administration making any difference?”

NBC’s Meet the Press said nothing about immigration or the border, spending a few minutes instead on the not-so-breaking news that it was the 25th anniversary of the Lewinsky scandal.

■ Sunday night, January 22: The East Coast saw NFL football on CBS instead of the CBS Weekend News, but an examination of a replay on CBSN revealed no mention of the CBP report. Neither NBC Nightly News nor ABC’s World News Tonight spent any time on the bad news for the Biden administration, either. The news cycle has clearly moved on. Both shows led with multiple stories about the mass shooting in Monterey Park, California; NBC anchor Kate Snow even anchored her broadcast from the site of the shooting.

And that’s the point of the Friday night news dump: Release bad news at a time when it’s unlikely to be covered, and before anybody notices, the networks will have plenty of other important stories competing for coverage.

The networks don’t have to play along with this, of course, but they did. And once again, thanks to broadcast network news shows that chose not to call out the Biden administration for its cynical strategy, bad news about the border went essentially unreported this weekend.