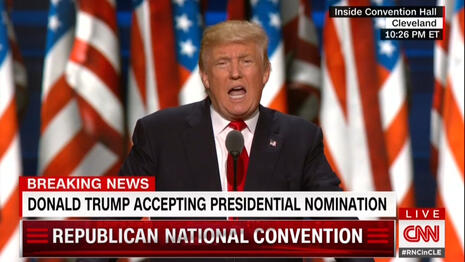 Last Saturday, I dug out a few examples of how liberal journalists swooned over Democrats at every convention since 1988 (as far back as the MRC’s archives go). And, sure enough, the media played their parts perfectly this week, fawning over all of the Democrats’ major 2020 convention speakers: Michelle Obama, Jill Biden, Barack Obama, Kamala Harris and Joe Biden himself, plus even convention bit players such as the radical left-wing Alexandria Ocasio-Cortez (oh, why couldn't there have been more of her?)

So, what does recent history say about the media’s likely reaction to the Republican convention? Well, they never seem to like it. Year after year, journalists deride the GOP convention as too far to the right, and castigate the party as hostile to women, minorities and gays. While Democratic attacks on Republicans are applauded, it’s nasty mud-slinging when Republicans dare to launch counter-attacks.

So to get ready for next week’s Republican convention, here’s a look back at what these liberal media outlets said about the GOP during the previous eight conventions:

“You’re opposed to abortion in any form. You also have opposed the ERA, and you’re opposed to increasing the minimum wage, which is important to a lot of women out there. Aren’t you going to have a hard time selling Dan Quayle to the women of this country?”
— NBC’s Tom Brokaw interviewing vice presidential nominee Dan Quayle during live convention coverage, August 17, 1988.

“Is there any concern on your part that this ticket might just be a little too conservative? It’s to the right of most Americans in the country right now.”
— CBS correspondent Lesley Stahl, interviewing former Delaware Governor Pete DuPont, August 18, 1988.

“The only excited, demonstrative delegates any of us could find were the ones from the religious right, Pat Robertson’s God and country rally. They remind me of those Goldwater delegates of 28 years ago, far more interested in imposing ideological purity on this party than they are on winning the election. They were happy today. They got the platform they want. No room for a pregnant woman to make any decision at all, even if she was raped. It’s a platform tough on welfare, tough on taxes and guns and gays and pornography, tough even on public radio and public television. They cheered Dan Quayle this afternoon and they will cheer Pat Buchanan and Ronald Reagan tonight, but will they help elect George Bush? It’s almost as if they haven’t thought of that, Dan.”
— Charles Kuralt during August 17, 1992 CBS Republican convention coverage.

“A lot of people said [there was] just too much red meat there [in the speech]. You gave the impression that if you’re not a white, heterosexual, Christian, anti-abortion, anti-environment, you’re somehow not welcome in the Republican Party.”
— NBC anchor Tom Brokaw to Pat Buchanan, August 18, 1992.

“Some have said they find the tone of this convention, some Republicans, a bit troubling. Abortion rights have been totally ignored in the platform; gay rights not acknowledged in the platform....Do you think the Republican Party has grown, or become too exclusionary, too intolerant, and that this kind of rhetoric is divisive and counterproductive?”
— Co-host Katie Couric to Vice President Dan Quayle on NBC’s Today, August 19, 1992.

“Even some Republicans describe the current platform as quote, ‘harsh,’ ‘extreme,’ even ‘radical.’ Do you see it that way?”
— Anchor Dan Rather to vice presidential nominee Jack Kemp on the August 12, 1996 CBS Evening News.

“The right to abortion has never been an overwhelming issue for women at election time. But this fight within the Republican Party has many women questioning how far this party will go to limit their rights.”
— ABC’s Peter Jennings on the Republican convention, August 13, 1996 World News Tonight.

“The platform is, again, very strongly pro-life and rejects abortion rights, and the platform specifically comes out against gay unions, and against legal protections based on sexual preferences. So is this really an open, compassionate, tolerant party?”
— Charles Gibson to Lynne Cheney, August 2, 2000 Good Morning America.

“George W. is one thing, but as long as the Republican Party — you noted some of them — is populated by the Pat Buchanans, the Jesse Helmses, the Jerry Falwells, the Bob Barrs, don’t blacks have a right to be suspicious?”
— CBS’s Bryant Gumbel to a panel of black men on The Early Show, August 2, 2000.

“The Republican convention opens in New York to renominate George W. Bush and showcase the party’s, quote, ‘moderate side.’ Will voters buy it?”
— Dan Rather opening the August 30, 2004 CBS Evening News.

“He hopes to rekindle his year 2000 mantra of compassionate conservatism, a goal his critics say would be a stunning feat given his record of the past three years.”
— White House correspondent John Roberts previewing President Bush’s convention speech, September 2, 2004 CBS Evening News.

“You and Olympia Snowe, the other Senator from Maine, are known as moderate Republican women. You have no place in this convention. The platform does not seem to speak to a lot of women in this country. It’s anti-abortion, it does not expand stem cell research, on other social issues in which women have some interest, for example, gay unions, is formally opposed to that. Do you think that this platform and this party is doing enough to reach out to moderate women across the country?”
— NBC’s Tom Brokaw to Senator Susan Collins on his 4pm EDT MSNBC show Brokaw in New York, August 31, 2004.

“[It was] the toughest of the last two weeks. Far and away the toughest speech we’ve seen so far....What I wonder about is how it came across on television. A little too nasty? A little too ugly? I don’t know.”
— ABC’s George Stephanopoulos moments after Rudy Giuliani’s speech to the Republican convention, September 3, 2008.

“I thought, very smug, very sarcastic, very cutting. And you know what? The Republicans had been trying to portray her as a victim for the last couple days. Well, she’s not going to be a victim anymore. She’s going to be a target.”
— CNN legal analyst Jeffrey Toobin after Sarah Palin’s speech to the Republican convention, September 3, 2008.

“A lot of women look at the Republican platform on abortion, contraception, a number of issues, and ask the question whether Republicans have women’s best interests at heart?”
— CBS anchor Scott Pelley in an interview with Ann Romney shown on the August 28, 2012 Evening News.

“Are you prepared to leave this gathering and own the fact that the platform of this party allows a woman, who has been raped, no exception but to carry that child to term?...In a business where you and your opponent are trying to attract, especially, suburban women, does it send the right message?”
— NBC Nightly News anchor Brian Williams to Rep. Paul Ryan, August 30, 2012.

“That thing about the oceans, that thing about the planet — what’s the point? How narrow-minded, how small and insular and piggish can you be about this country, to say we don’t care about the planet we live on, which is getting hotter....Every one of our religions believes in the stewardship of this planet. God gave us this planet — to destroy it? To laugh at its demise?”
— MSNBC’s Chris Matthews Mitt Romney’s convention speech, August 30, 2012.

“There was a lot of really angry rhetoric, a lot of talk about murder and death and tying it all back to immigrants, tying it all back an illegal migration and there was a really hard-edged theme...If you’re a person of color, this is a weird place to be.”
— Host Joy Reid on MSNBC’s The Place for Politics, July 19, 2016.

“It’s this festival of hating Hillary tonight, this brewing up of almost a witch-like ritual tonight...It did remind me of those old swords and sandals movies with the Roman emperor going up and down in the coliseum. And I get the feeling, he wanted — if they had said, ‘kill her now,’ it was almost that bloodthirsty....And the audience always as requested, responded always with the verdict of guilty. And they said it in a blood curdling way every time.”
— MSNBC Hardball host Chris Matthews talking about New Jersey Governor Chris Christie’s convention speech, July 19, 2016.