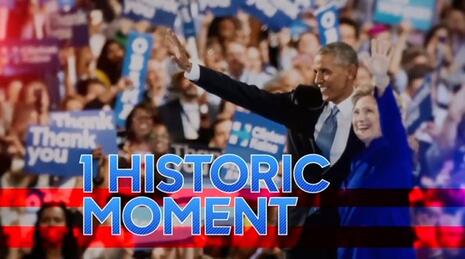 Every four years, the Republican and Democratic conventions give the establishment news media a chance to provide even-handed coverage of the two parties, and every year they fail to deliver.

This year, thanks to the pandemic, the conventions are going to be little more than back-to-back-to-back speeches delivered in a variety of empty rooms, but expect the running commentary from TV talking heads to resemble previous elections: fawning over the Democratic celebrities, insisting they’re “moderates” or even “conservatives,” and amplifying their anti-Republican talking points. But the following week, the Republicans will likely be derided as odious out-of-the-mainstream radicals who shouldn’t be allowed to present their arguments to the public without an oppressive media filter.

Year after year, it’s the same story. To get ready for next week’s Democratic “convention,” here’s a look back at how hard the liberal media swooned over their favorite political party during the previous eight conventions:

“[Michael] Dukakis is basing his presidential campaign on the argument...a rational, competent manager is what this country needs. Friend, foe, or neutral almost all agree that this is the kind of presidency Michael Dukakis would bring to the White House.”
— Reporter Jeff Greenfield during ABC News coverage, July 19, 1988.

“He [Jackson] has become here, a kind of new, he’s acquired a new status. He’s almost like Hubert Humphrey was, a sort of conscience of the country.”
— Retired correspondent Eric Sevareid during CBS News convention coverage, July 20, 1988.

“Even liberal Democrats now...think that Al Gore and Bill Clinton could be a winning ticket. They’re willing to swallow the problems that they have with such a conservative pair in hopes of winning.”
— CBS reporter Susan Spencer, July 13, 1992 convention coverage.

“That’s the ticket. Not a liberal in sight, and that’s the picture Clinton wants the convention to leave with the country, Democrats happily moving from their liberal past to their centrist future.”
— ABC reporter Jim Wooten on the July 13, 1992 World News Tonight, talking about the first night of the Democratic convention.

“Rita, how worried are the Democrats about protests from some here that the party is running too far to the right, particularly on welfare reform?”
— Anchor Dan Rather to correspondent Rita Braver, August 25, 1996 CBS Evening News.

“This has been a difficult couple of years for you. Did that applause, the way you’ve been treated here, the way people have been reacting to you, kind of make it all go away?”
— NBC’s Maria Shriver in an interview with First Lady Hillary Clinton after her August 27, 1996 Democratic convention speech.

“But with these guys coming [Jesse Jackson and Mario Cuomo], it was kind of like your young love coming back and, ‘oh, I remember when I was, you know, young and in love with this guy who was totally unacceptable, and I did the right thing by marrying the right guy — but, gee, he was kinda cute.’”
— ABC’s Cokie Roberts discussing the Democrats’ Tuesday night convention speeches, August 28, 1996 Good Morning America.

“This is the most conservative Democratic ticket in at least 50 years.”
— CNN political analyst William Schneider, August 15, 2000.

“Let’s talk about what they are now calling, Mr. Vice President, ‘The Kiss’. You heard about ‘The Catch’ in that football game, this is ‘The Kiss.’ You really planted one on Mrs. Gore at the beginning of your speech there. What were you thinking?”
“Were you trying to tell the American people that you’re really a kind of emotional guy?”
“Well after watching that kiss I know how you survived 30 years, Mr. Vice President. Way to go! It’s nice talking to you.”
— Today co-host Matt Lauer to Al Gore, August 21, 2000, the Monday following his convention speech.

“The personality that Edwards exudes when he comes to these events is something that’s pretty infectious with these delegates. And I talked to one delegate yesterday who says, ‘You know, I’m coming to like John Kerry, but I haven’t yet fallen in love with him. But I will tell you this, I have fallen in love with John Edwards.’ It’s obvious the charisma out there gets to everybody here in the Fleet Center.”
— CBS’s John Roberts during live coverage shortly after vice presidential nominee John Edwards finished his convention speech, July 28, 2004.

“People who served with him in Vietnam said, ‘You can’t believe what he’s like in battle. He just changes. He gets this look over him.’ And when I saw him walking down the aisle tonight on the way into the speech, I said, ‘Oh yeah, there’s that look.’ And I just knew at that point that he’s going to nail this, and he did. I have never seen the man speak so well.”
— Time’s Joe Klein reviewing John Kerry’s convention speech, CNN’s NewsNight, July 29, 2004.

“When asked who would be a better President, the journalists [at the Democratic convention] from outside the Beltway picked Mr. Kerry 3-to-1, and the ones from Washington favored him 12-to-1. Those results jibe with previous surveys over the past two decades showing that journalists tend to be Democrats, especially the ones based in Washington.”
— New York Times reporter John Tierney, in his August 1, 2004 “Political Points” compendium, on what he found when he surveyed 153 journalists at a press party in Boston.

George Stephanopoulos: “A night of perfect political choreography. The only problem Barack Obama has right now, and it’s a high-class problem, as Bill Clinton used to say, is can he top what happened tonight?”
Host Terry Moran: “An extraordinary series of speeches [by Bill Clinton and Joe Biden].”
— ABC’s Nightline on August 27, 2008.

“In many ways it was less a speech than a symphony. It moved quickly, it had high tempo, at times inspiring, then it became more intimate, slower, all along sort of interweaving a main theme about America’s promise, echoes of Lincoln, of King, even of Reagan and of Kennedy....It was a masterpiece.”
— CNN analyst David Gergen during live coverage following Barack Obama’s convention speech, August 28, 2008.

Keith Olbermann: “For 42 minutes, not a sour note and spellbinding throughout in a way usually reserved for the creations of fiction. An extraordinary political statement. Almost a fully realized, tough, crisp, insistent speech in tone and in the sense of cutting through the clutter....I’d love to find something to criticize about it. You got anything?”
Chris Matthews: “No. You know I’ve been criticized for saying he inspires me, and to hell with my critics!...You know in the Bible they talk about Jesus serving the good wine last, I think the Democrats did the same.”
— MSNBC live convention coverage, August 28, 2008.

“Is it your job here, as you understand it, to argue that Mitt Romney is the personification of that Wall Street greed and excess?”
— Co-host Savannah Guthrie to Massachusetts Democratic Senate candidate Elizabeth Warren on Today, September 4, 2012.

“I wanted to take you back to something you wrote. You wrote that ‘I have never had a President who inspired me the way people tell me my father inspired them. But for the first time, I believe, I have found the man who could be that President.’ Do you still feel just as inspired by President Obama?”
— ABC’s David Muir to Caroline Kennedy on World News, September 5, 2012.

“If you watch MSNBC during convention coverage, you have a cheering section for the Democrats.”
— CNN Washington bureau chief Sam Feist, as quoted in the Huffington Post, September 5, 2012.

Co-anchor Scott Pelley: “Night two of the convention, the floor is covered with shards of glass. Hillary Clinton has shattered another ceiling for women.”...
Co-anchor Gayle King: “Happy tears in the room for Hillary Clinton and I mean a lot of tears. One man, a delegate from South Carolina, told me that he went into the ugly cry which means sobbing uncontrollably.”
— During CBS’s live Democratic convention coverage, July 26, 2016.

“For women who have long fought for a woman in the White House, the sight of Clinton walking out on to the stage dressed like a white knight will be something they’ll tell their daughters about.”
— Host Carol Costello on CNN Newsroom, July 29, 2016.

“Well, it’s pretty well known I’ve always gone for this guy [Barack Obama]. I’ve liked the way he speaks about our country, from the time I first heard him in 2004 up in Boston at the convention....It was magnificent....He has that Julia Roberts’ smile of his that he saves, and when he does it, you can’t resist the guy.”
— Hardball host Chris Matthews during MSNBC’s live Democratic convention coverage, July 27, 2016.