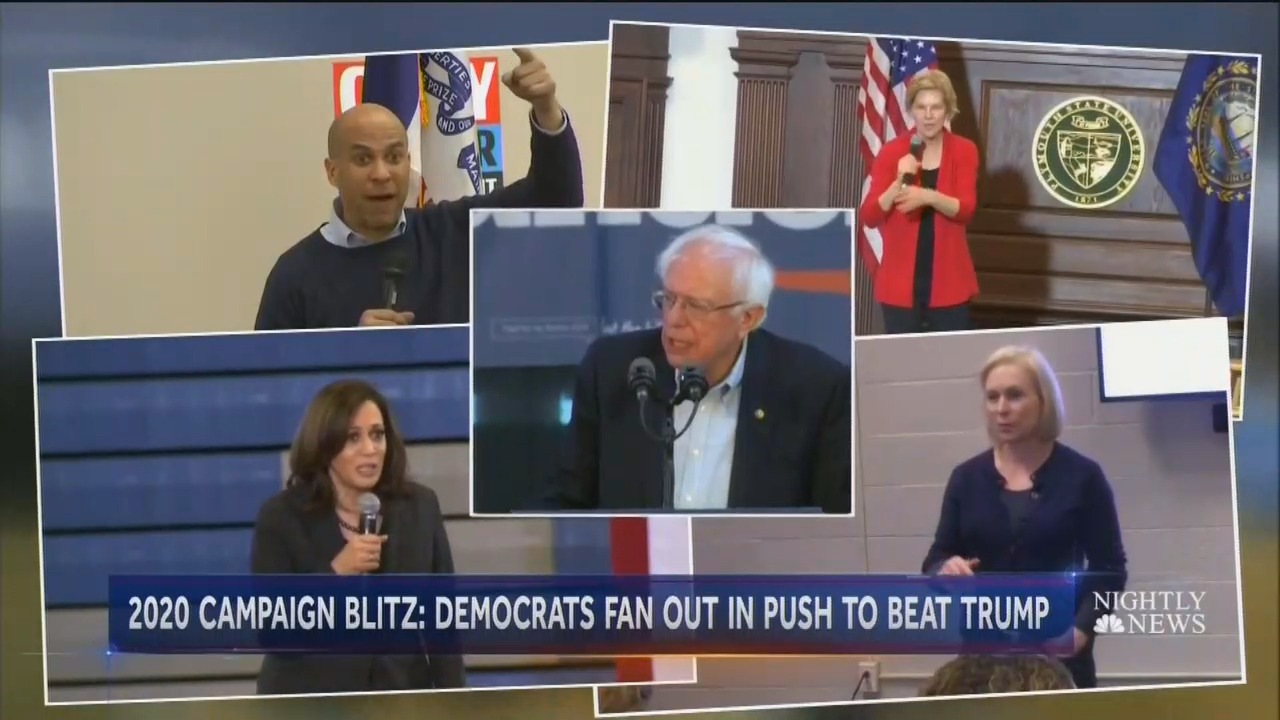 There are already two notable facts about the 2020 Democratic primary race: 1) these candidates have championed some of the most radical policy proposals ever seen in American politics; and 2) the broadcast network have essentially suppressed this news.

MRC analysts reviewed all coverage of the 2020 Democrats on the ABC, CBS and NBC evening news programs from January 1 through June 15. Early as it is, the Democrats have already been featured or mentioned in a total of 220 evening news stories, or nearly four hours (222 minutes) of airtime.

It’s at this stage of the nomination contest, as each candidate begins their campaign, that we see the most journalistically-assigned labels, as reporters try to help viewers pigeonhole each newly-announced wannabe’s place on the ideological spectrum. Yet the vast majority of this year’s coverage (202 stories, or 92%) has failed to include any ideological label.

The labels that reporters have used have tended to the mild side: Ten uses of “progressive,” three of “liberal,” three “centrist,” two “moderate,” and one “populist” used by CBS to describe Vermont Senator Bernie Sanders’ platform back on March 2. 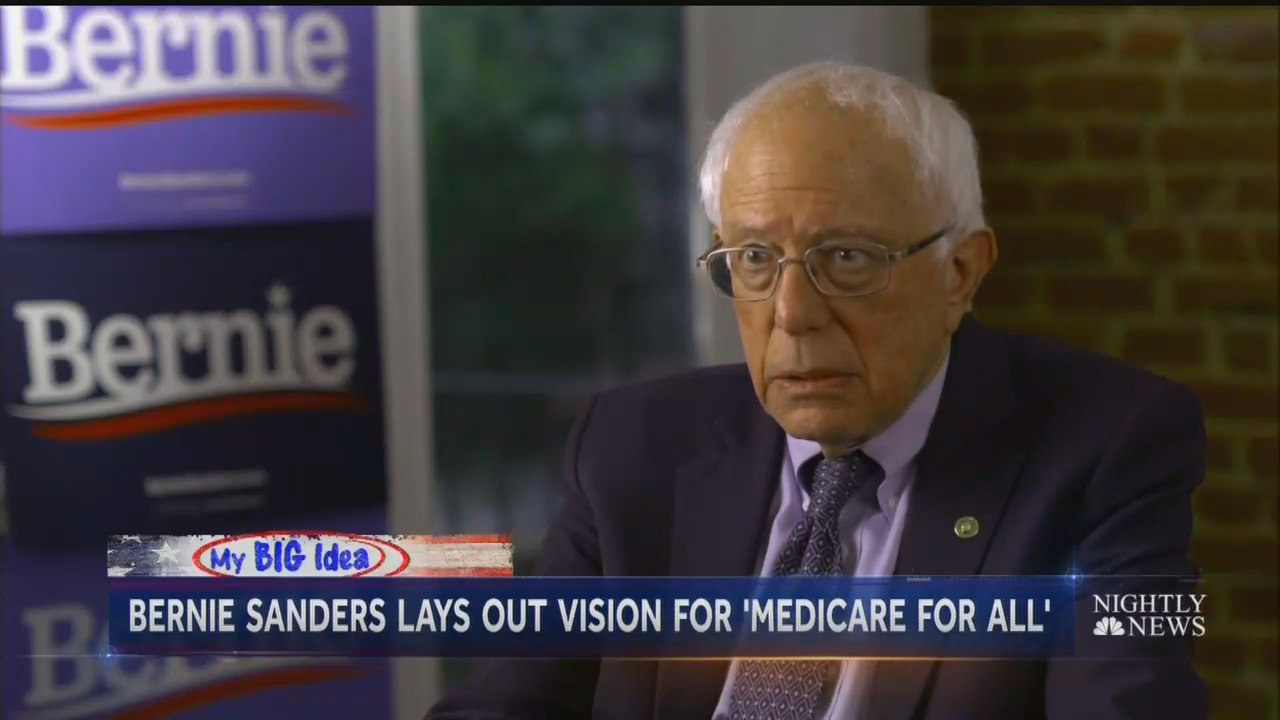 Despite his long record of extreme positions, no reporter apparently felt comfortable calling Bernie Sanders a “socialist,” although there were four occasions when the networks confided he was a “self-described Democratic socialist,” a word choice that ensured viewers knew the Vermont Senator embraced the term. Talking with Sanders last week about his plan for a complete government takeover of health insurance (marketed with the positive spin of “Medicare-for-all”), NBC’s Harry Smith refused to characterize the plan himself, but told Sanders “the word that will come from Republicans is ‘socialism.’”

Neither Sanders nor any of the other Democrats were ever tagged with labels suggesting they were outside the mainstream: “extreme,” “radical,” “fringe,” “far-left,” “ultra-liberal” or “ultra-left,” even though variations of many of these terms (“far-right,” “ultra-conservative,” and “kamikaze conservative”) have been used to describe GOP presidential candidates with far more mainstream positions. 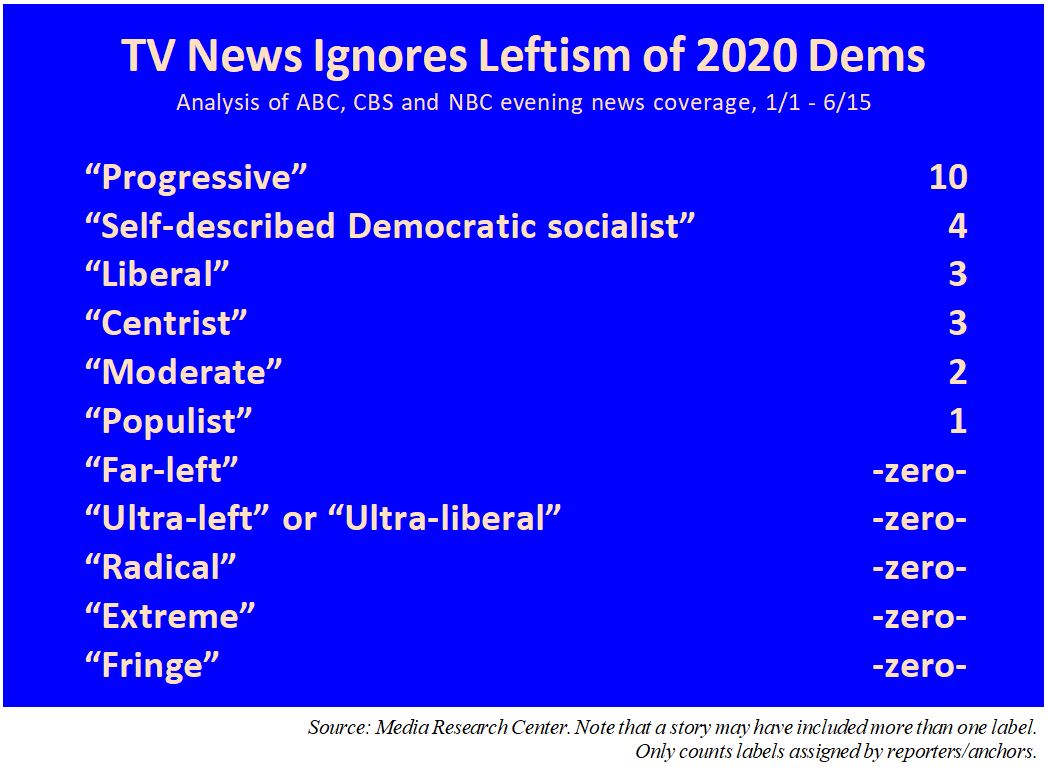 Yet this is a group which includes candidates who have proposed audaciously radical policies such as (just a sample): “free” health care, “free” child care, “free” college, massive forgiveness of student loans, reparations for the descendants of slaves, the growth-smothering regulations of the “Green New Deal,” doubling the federal minimum wage, tearing down existing barriers on the U.S.-Mexican border, refusing to appoint any pro-life judges, increasing the Supreme Court to 15 members and eliminating the Electoral College in a blatant attempt to give blue-state Democrats even more power.

The “progressive” and “liberal” labels were affixed to only five candidates: Sanders, Elizabeth Warren (NBC’s Kristin Welker touted to her as a “liberal firebrand”), Kamala Harris, Cory Booker and Kirsten Gillibrand. “Moderate” and “centrist” tags were employed for Joe Biden, Amy Klobuchar and Tim Ryan, while the rest of the field was spared any ideological labeling.

(Despite the “moderate” tag, Biden’s lifetime rating from the American Conservative Union is scarcely higher than the socialist Sanders: 12.7% for the former Vice President, vs. 6.8% for the Vermont Senator.)

Even as the networks downplayed the 2020 Democrats’ far-leftism, they eagerly touted adjectives describing the candidates’ race, gender, ethnicity and sexual identity, applauding the group as “crowded and diverse,” “historically diverse,” and the “most diverse” group ever to run. MRC’s Bill D’Agostino has compiled a few of these examples:

The networks have a long history of painting mainstream conservative policies as radical or outside-the-mainstream. Now that they have a huge crop of Democratic politicians pushing radical ideas that would have seemed unthinkable a few years ago, their ideological label-maker is nowhere to be found.