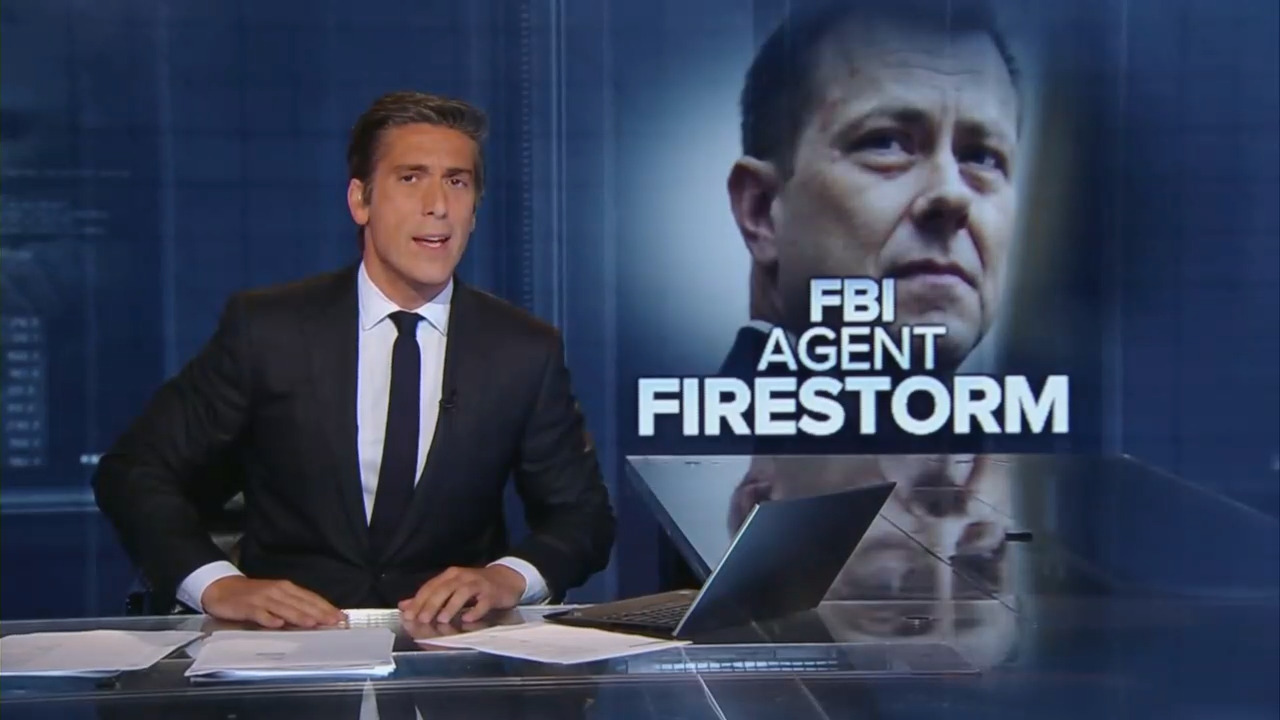 By far, the biggest news story of the Trump presidency has been the Russia investigation. As of August 15, the three broadcast network evening newscasts have devoted a combined 1,854 minutes to the probe, or nearly one-fifth (19.6%) of all of their Trump news. Yet virtually none of that airtime (just 62 minutes, or 3.3%) has been spent scrutinizing Robert Mueller’s investigation — a big shift from twenty years ago, when the networks made Ken Starr’s conduct the focus of much of their coverage.

Instead, the massive amount of daily news coverage presupposes wrongdoing on the part of the President and/or his associates, eclipsing all other topics. Total coverage of all aspects of the President’s controversial immigration policies has received 1,043 minutes of airtime over the past 19 months, while the showdown in North Korea has received 748 minutes. Yet even the total evening news coverage of these two huge topics added together — 1,791 minutes — drew less time than that spent on just the Russia investigation. 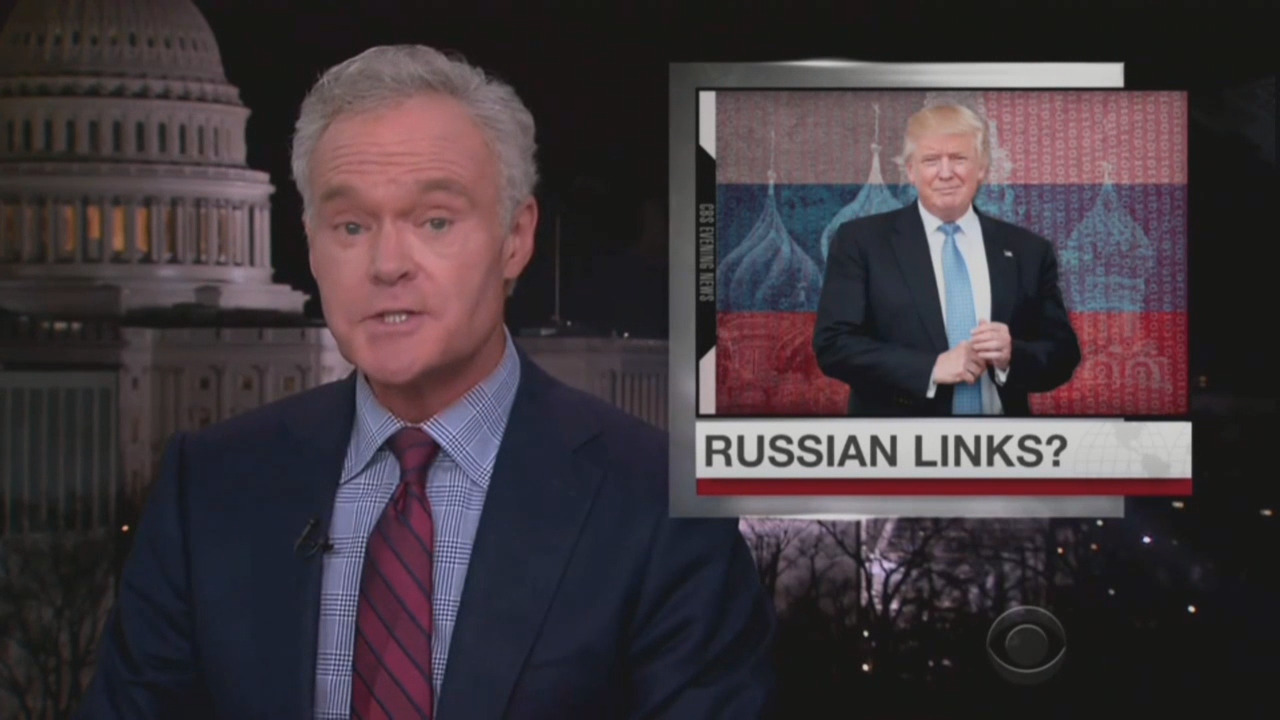 The cloud of Russian “collusion” has permeated news coverage of the Trump presidency since the very beginning. On Inauguration Day, January 20, 2017, then-CBS Evening News anchor Scott Pelley greeted the new President with a full report about how “as Donald Trump begins his presidency, some of his former advisors are being investigated for possible links to Russian officials.”

In terms of sheer intensity, the networks’ Russia coverage reached its peak last spring, in the five weeks following the appointment of special counsel Robert Mueller on May 17, 2017, when MRC found that the networks spent a whopping 353 minutes of airtime on the Russia probe, or 55 percent of all coverage of the Trump presidency during those weeks.

But unlike the media's hostility to the Starr investigation that led to President Clinton’s impeachment 20 years ago, the media this time have seemed utterly uninterested in investigating the investigator.

In terms of network airtime, the biggest controversy to face the Mueller investigation involved the stridently anti-Trump text messages sent by a top FBI agent, Peter Strzok, and FBI lawyer Lisa Page, with whom he was having an affair. Yet even this sensational story, which resulted in Strzok’s firing earlier this month, resulted in just 39 minutes of evening news coverage. 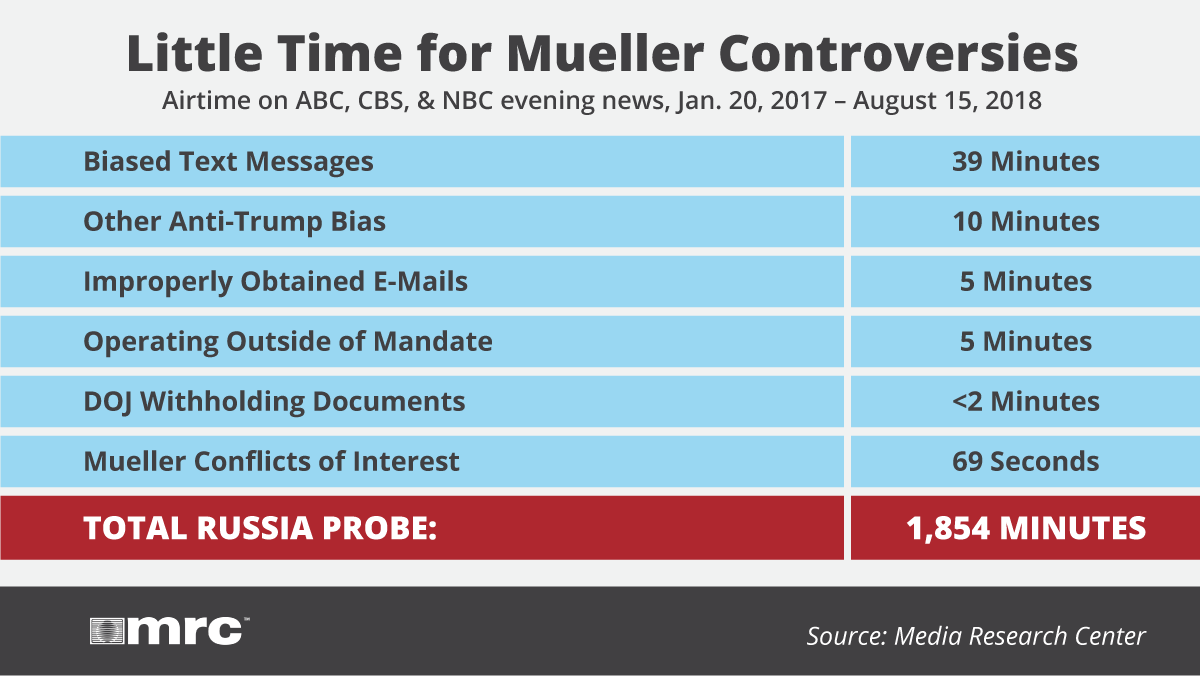 The networks spent an additional 10 minutes discussing other potential anti-Trump bias (apart from Strzok) that might have been a factor in the investigation, including the fact that so many of Mueller’s top lawyers are Democrats. Criticism that the Mueller team had improperly obtained e-mails written by Trump officials during the transition period was given barely five minutes of airtime, all of it in December. The networks spent even less time (4 minutes, 44 seconds) on challenges that Mueller was exceeding his authority by prosecuting Paul Manafort for alleged crimes unrelated to Trump campaign activities.

The ongoing complaint that the Department of Justice has failed to deliver documents subpoenaed by House Republicans, which was why some conservatives filed an impeachment resolution against Deputy Attorney General Rod Rosenstein, drew a scant one minute, 45 seconds of airtime. President Trump’s complaint that Mueller has his own conflicts of interest drew even less respect from the networks — just one minute, nine seconds.

Add it all up, and the networks have spent only 62 minutes telling their viewers about questions or complaints about the investigation, or barely three percent of the total coverage of the Russia probe itself.

That’s hardly the way they approached such an investigation when it focused on a Democratic President twenty years ago, when the networks filled their airwaves with talk about an “over-zealous prosecutor over-reaching in a bid to bring down the President.” To refresh your memory, watch the video:

Thanks to MRC Research Analyst Bill D'Agostino for helping compile the data in this article, and for assembling the video compilation shown above.