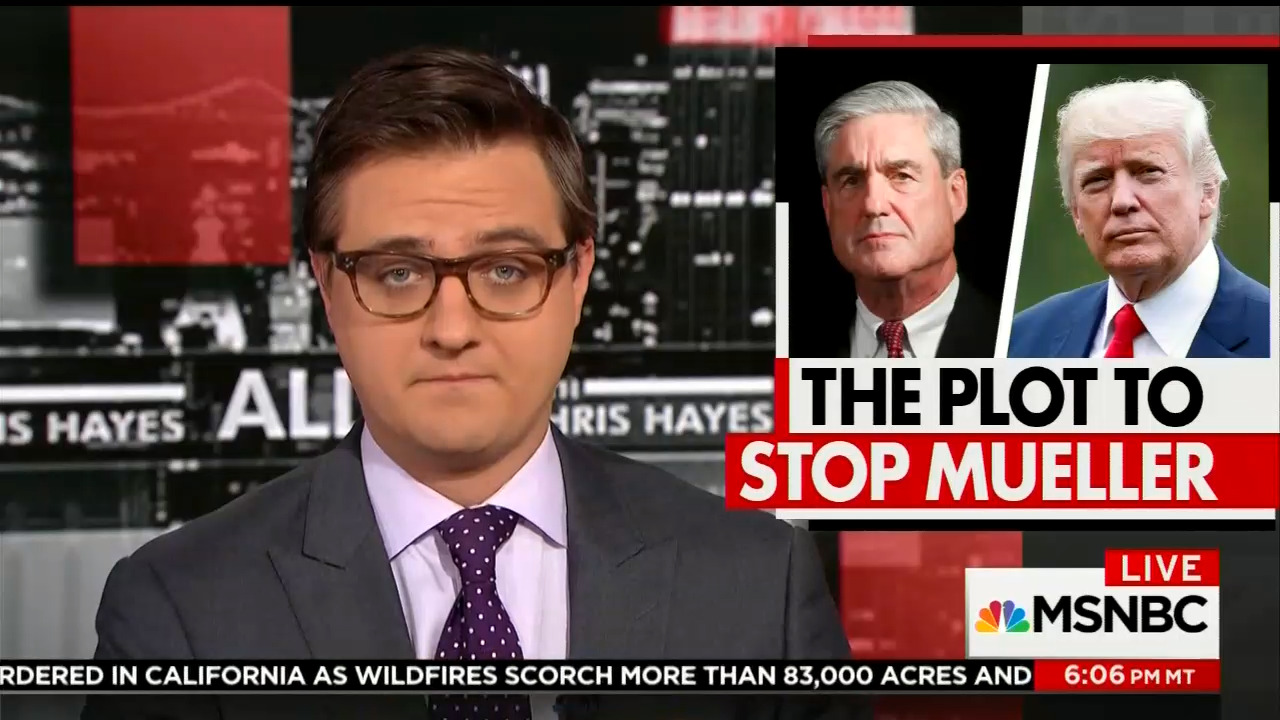 Liberal reporters are scandalized by what they say is President Trump’s effort to “discredit” and “undermine” special counsel Robert Mueller, worried that it could presage an attempt to “remove Mueller, or end his investigation.” But when President Bill Clinton was being investigated by Ken Starr, journalists applauded Democratic and White House attacks on the independent counsel, and frequently joined in themselves.

Today’s journalists seem appalled by attempts by the President and his allies that question Mueller’s credibility. Washington Post reporters Devlin Barrett and Sean Sullivan sounded the alarm in a front-page story on December 7: “Several law enforcement officials said they are concerned that the constant drumbeat of conservative criticism seems designed to erode Mueller’s credibility.”

An hour later, with the words “THE PLOT TO STOP MUELLER” on screen, MSNBC host Chris Hayes announced his opinion that “there is a pretty concerted effort to lay the groundwork to essentially remove Mueller, or end his investigation.” 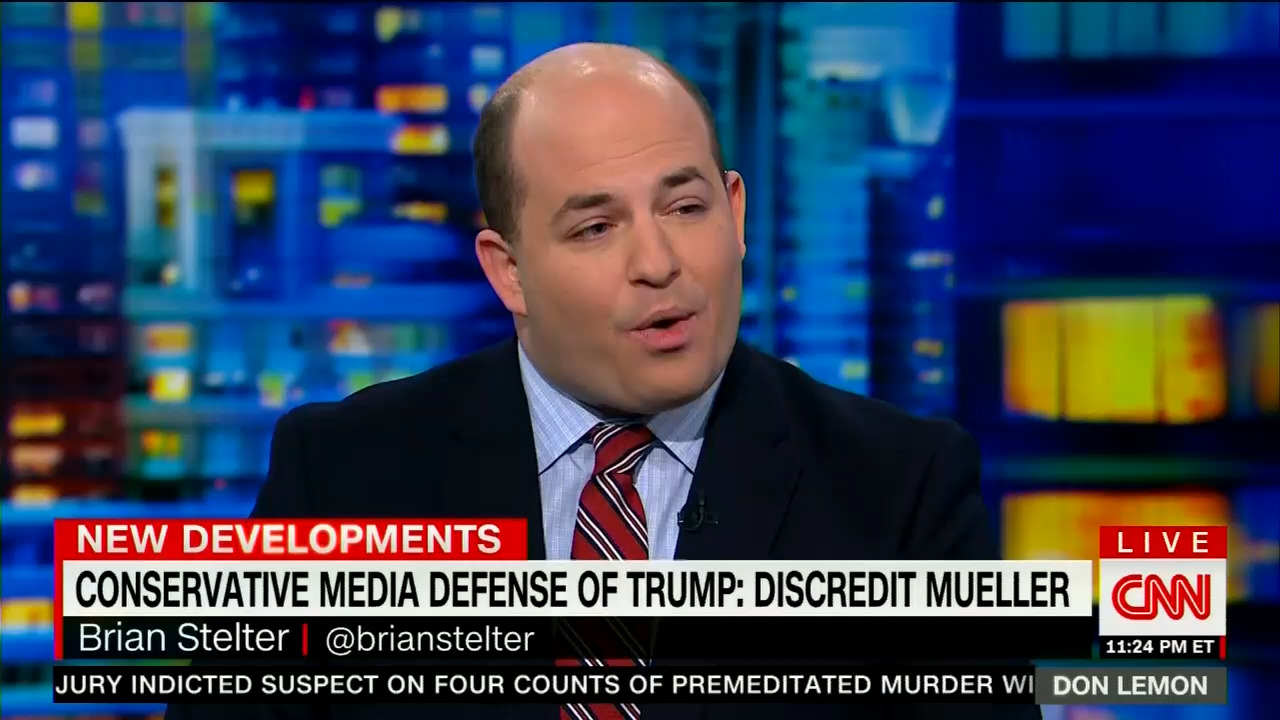 Later on CNN Tonight, host CNN’s Don Lemon found it “embarrassing” that journalists would participate in criticizing Mueller, complaining to media reporter Brian Stelter about Fox News: “There has been a huge rise in anti-Mueller and FBI rhetoric from right-wing media recently....It’s just been shocking to watch.”

The media’s fierce protectiveness of the investigation into Trump is the utter opposite of how they reacted in 1998, when the Clinton White House openly challenged independent counsel Kenneth Starr. Back then, many liberal reporters enthusiastically joined the effort to discredit the prosecutor and save their hero.

ABC’s Cokie Roberts at one point marveled about the effectiveness of Clinton’s campaign to undermine the Starr investigation. “It’s fabulous. It is so good. It just unbelievably good,” she exclaimed on CNN’s Larry King Live on April 28, 1998. “Look at how they’ve managed to turn around this whole question about the President’s behavior to one of Ken Starr’s behavior, you know, just taken the whole focus off of the President and put it onto the prosecutor. That’s remarkable.” 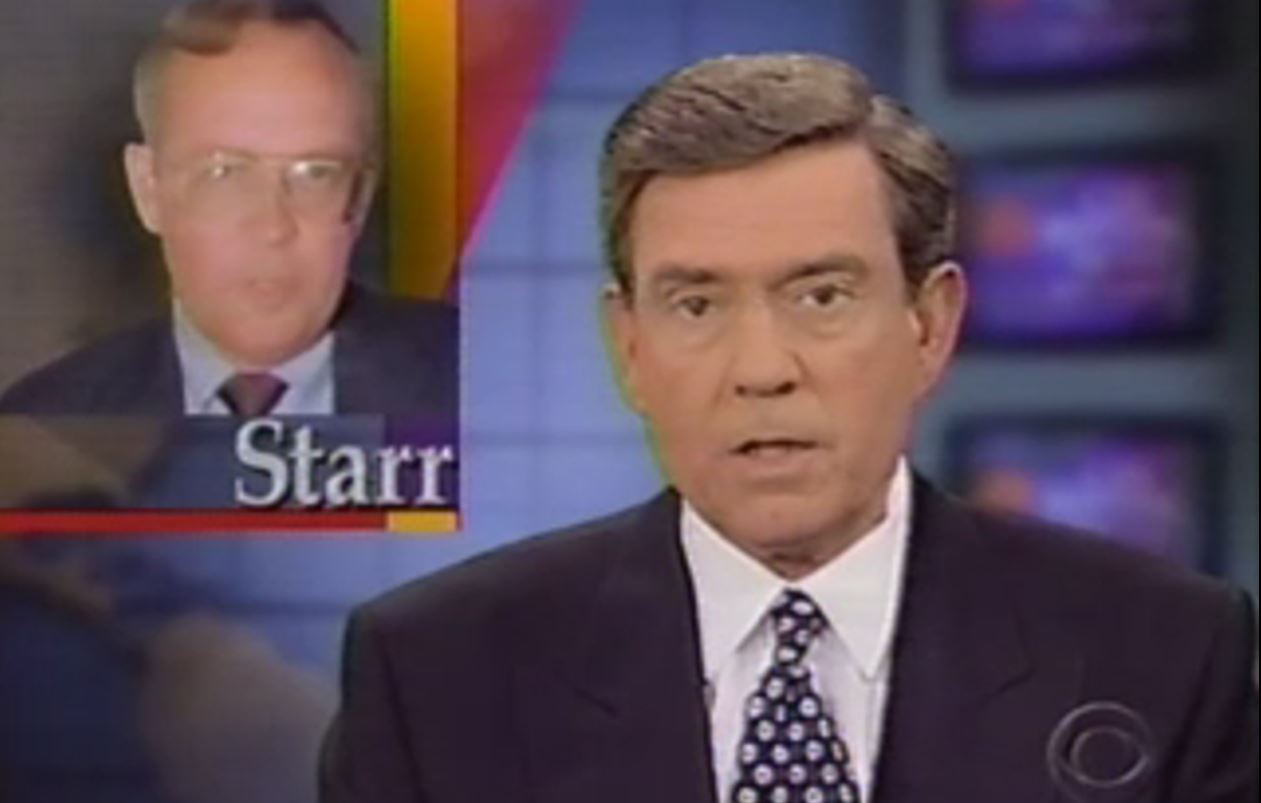 In stark contrast to their supportive coverage of Mueller, the media’s treatment of Starr in the 1990s was savage. Almost as soon as he was named — and long before the Lewinsky story broke — Clinton-friendly journalists tried to discredit him as an unfair partisan. “There is growing controversy tonight, about whether the newly named independent counsel in the Whitewater case is independent or a Republican partisan allied with a get-Clinton movement,” CBS Evening News anchor Dan Rather impugned on his August 8, 1994 broadcast.

Rather kept up the innuendo, four days later suggesting: “Starr is an ambitious Republican partisan backed by ideologically-motivated, anti-Clinton activists and judges from the Reagan, Bush, and Nixon years.”

The media’s Starr-as-partisan mantra was merely the first step. At the same time Bill Clinton was running for re-election in 1996, Starr was putting his ex-business partners, James and Susan McDougal, on trial for fraud uncovered during the Whitewater investigation. Again, Clinton’s friends in the press raced to innoculate the President from the damaging scandal.

“If Ken Starr is a credible prosecutor, he will bring this to a conclusion and the Clintons will be exonerated,” Newsweek’s Eleanor Clift insisted on the February 10, 1996 McLaughlin Group.

“Have you any doubt that Kenneth Starr and his deputies are pursuing an agenda that is purely political?” NBC’s Bryant Gumbel gently asked Susan McDougal, who had already been convicted of four counts of fraud and conspiracy by the time she appeared on the Today show on September 17, 1996. 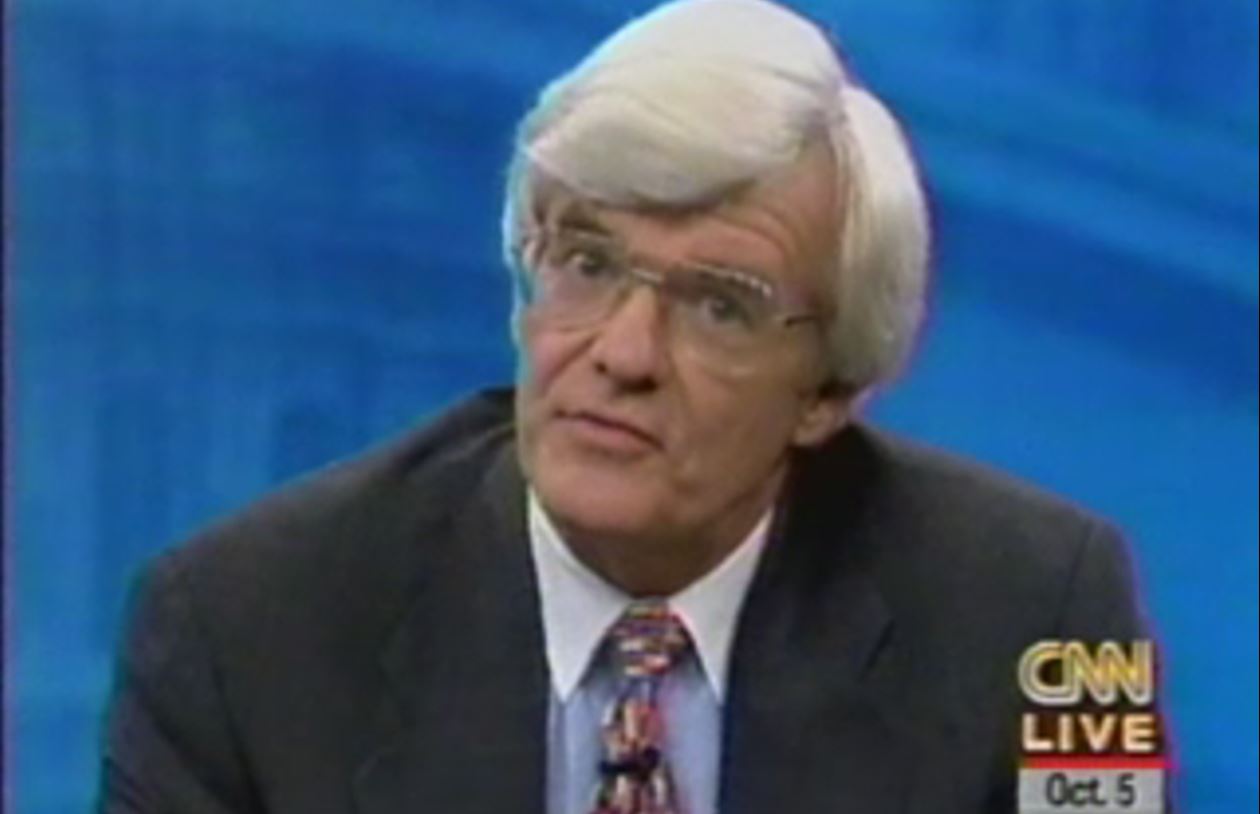 “By pandering to Clinton-haters, Mr. Starr appears to be abandoning all pretenses of impartiality. He went into this job with a reputation as a fair-minded conservative. He now looks more like a political hit man desperately eager for a future Supreme Court appointment,” Wall Street Journal columnist Al Hunt growled on CNN’s Capital Gang on October 5 of that year.

The liberal media’s real war against Starr began in January 1998, after the Drudge Report revealed a bombshell Newsweek report that Clinton had had an affair with a White House intern, Monica Lewinsky, and then denied it under oath when deposed as part of Paula Jones’ sexual harassment suit. Clinton’s own Attorney General, Janet Reno, had agreed to assign the Lewinsky case to Starr and his team, but Clinton’s defenders in the media chose to paint the special prosecutor as the villain.

“Given Kenneth Starr’s track record,” Bryant Gumbel (who by this time had left NBC for CBS) sneered on the January 21, 1998 Public Eye, “should we suspect that he’s trying to do with innuendo that which he has been unable to do with evidence?”

“What Starr is doing is trying to construct the truth according to Ken Starr,” Newsweek’s Clift asserted on the February 7, 1998 McLaughlin Group. “He’s the one who is suborning perjury here in my view. He has gone way beyond the pale in term of his treatment of witnesses.”

“The question now is whether Starr’s tactics will prove more offensive to the courts and the public than any alleged wrongdoing by the President that Starr is investigating,” correspondent Michel McQueen suggested that day on ABC’s World News Tonight.

“You don’t have to be a conspiracy buff to have trouble with how the Whitewater investigation ended up focused on the President’s pants,” Time’s Richard Lacayo and Adam Cohen fretted in the magazine’s February 9, 1998 issue. “Going after the President’s sex life, wiring Linda Tripp to secretly tape Lewinsky, trying to persuade Lewinsky to tape Clinton — are those the actions of a conscientious prosecutor or a political hit man?”

NBC’s Tom Brokaw picked up that theme on the February 16 Nightly News: “A growing backlash against independent counsel Kenneth Starr. Is he out of bounds or just tone deaf?...Has Starr gone too far in his pursuit of Monica Lewinsky and the President?”

The media clearly preferred talking about the “backlash” against Starr rather than the sordid details of Clinton’s own conduct. On February 24, top CNN anchor Bernard Shaw wanted to know if “by calling before the grand jury people such as [Clinton White House aide] Sidney Blumenthal, is Ken Starr acting illegally?” Two days later, Shaw challenged a panel of legal experts: “Should Ken Starr resign?...Should Starr pack his bags?”

As Starr continued to investigate the President, the media continued to snipe at him. “If he doesn’t come forward very soon with credible evidence of lawbreaking, he will go down in history as the Peeping Tom prosecutor,” Newsweek’s Jonathan Alter smirked on MSNBC’s The News with Brian Williams on April 1.

“Has Ken Starr overstepped his bounds? Is this a fishing expedition?” NBC’s Maria Shriver asked an ex-Secret Service agent during a July 16 Today show segment. Turning to another guest, she continued to channel the Clinton defense team: “Many people are outraged. They do call it a fishing expedition.” 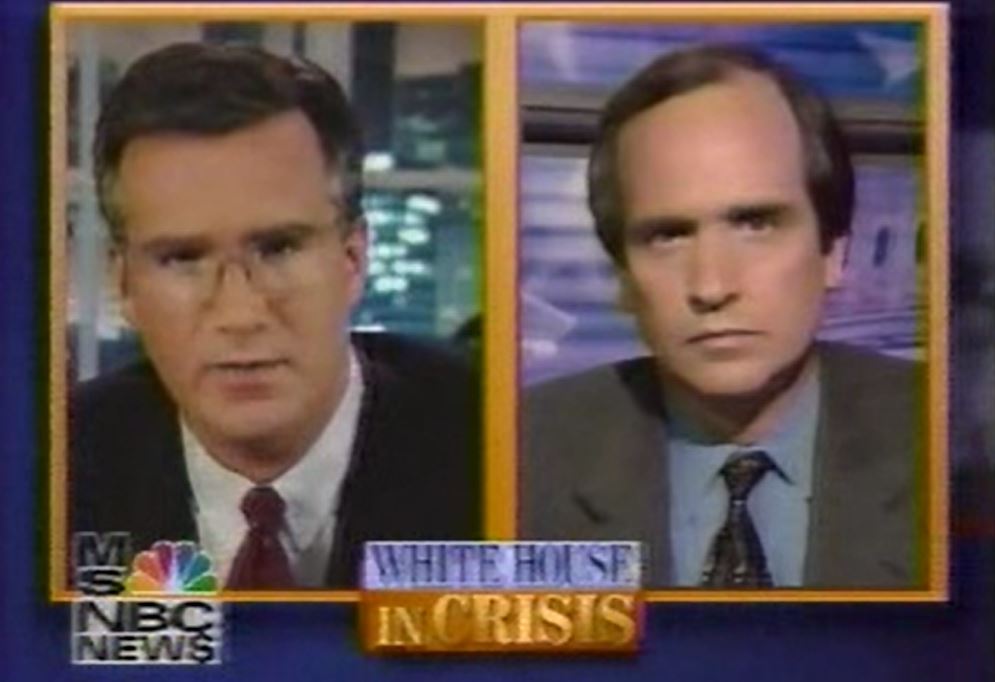 In the media’s campaign to demonize Starr, no insult, apparently, was out of bounds. “Facially, it finally dawned on me that the person Ken Starr has reminded me of facially all this time was Heinrich Himmler, including the glasses,” MSNBC host Keith Olbermann sneered on the August 18 Big Story, referring to the head of Nazi Germany’s feared SS divisions.

On September 9, 1998, Starr delivered his report — the Starr Report — to Congress. During MSNBC’s live coverage, Gwen Ifill likened it to a terrorist attack. “When someone drives, as one House Judiciary Committee member put this some weeks ago, a truck bomb up to the steps of the Capitol and just dumps it on them....it is in some ways, politically, a very violent action for Ken Starr to leave this on them weeks before an election when they’re trying to decide how to deal with it.”

The next morning, ABC’s Good Morning America co-host Lisa McRee proposed accepting the Clinton talking points at face value: “Couldn’t this be just a witch hunt? Couldn’t the Democrats and President Clinton’s people who’ve been defending him all these months be right?”

“Let’s not pretend for a moment that the Starr Report is a balanced, judicious presentation. It’s not. It is a partisan prosecutor with some zealous aides who’s trying to make a case against a guy he despises,” the Wall Street Journal’s Al Hunt fumed on CNN, September 12.

After nine months of badgering Starr, by mid-October 1998 many in the media clearly believed their own spin. “If this reminds you of George Orwell’s novel, 1984, it should,” CNN’s Bruce Morton complained on October 11.

“As much as Clinton stained the dress, Starr stained the country,” Time’s Margaret Carlson whined in her October 12 “Public Eye” column.

For most of 1998, CNBC’s Upfront Tonight was obsessed with discounting Starr’s investigation. “So why did it last for four years and cost $40 million? A look at the money and the men behind Ken Starr’s Whitewater investigation indicates that Hillary Clinton may have been right when she said there was a right-wing conspiracy to bring down the President,” co-host Diane Dimond insisted on October 23.

Today co-host Matt Lauer tossed this softball to longtime Clinton crony James Carville on October 26: “Remember when the First Lady was here back in January and she talked about the vast right-wing conspiracy. You agree with a lot of what she had to say. If there is a hierarchy in that conspiracy, like a military hierarchy, where does Ken Starr fall? Is he a private, is he a general, what is he?”

“What about the image and impression of Ken Starr as the sort of evil puppeteer behind this entire investigation?” NBC/MSNBC host John Hockenberry wondered on  MSNBC’s InterNight, November 19. 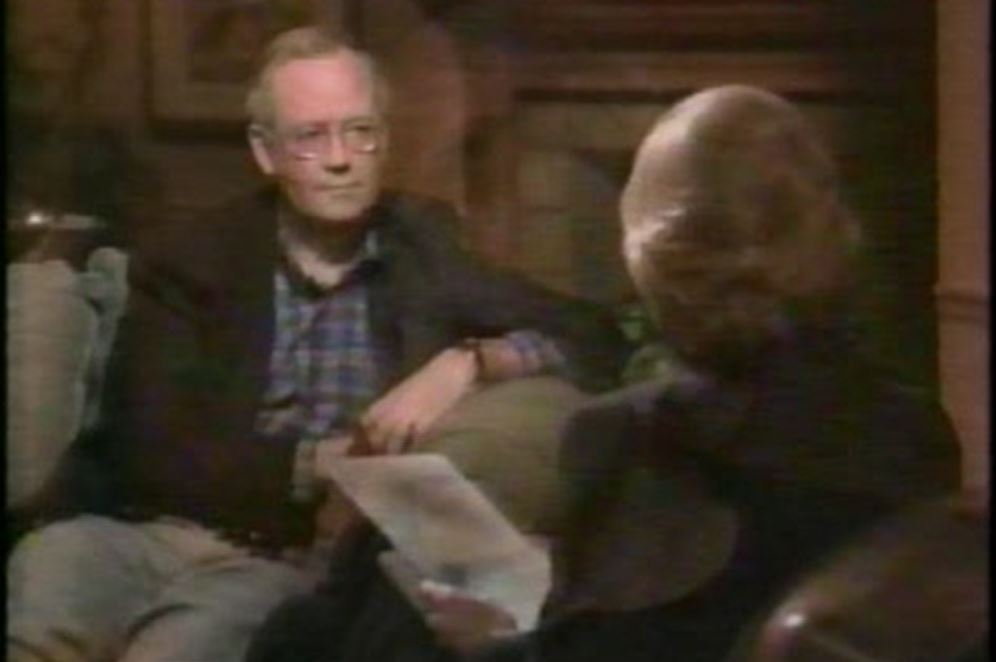 ABC’s Diane Sawyer conducted a lengthy interview with Starr for 20/20 on November 25. She undoubtedly spoke for many of her colleagues as she scolded him to his face for the content of the Starr Report: “This has been called demented pornography, pornography for Puritans.”

Sawyer also pushed the idea that President Clinton had more important things to do than be held accountable for his conduct: “Did you think to yourself, here is a man who has to deal with Saddam Hussein and bin Laden and what’s going on in Russia, and we’re putting him through this?”

It is, of course, impossible to imagine one of today’s journalists scolding Robert Mueller for distracting President Trump from important national business, or suggesting his investigation has become a partisan mission to destroy a President whom the Washington Establishment has never liked.

The double standard is obvious to anyone who will look.