The broadcast network evening newscasts remain as hostile as ever towards President Trump and his agenda, although the networks appear to be easing up on their obsessive wall-to-wall coverage of the administration. 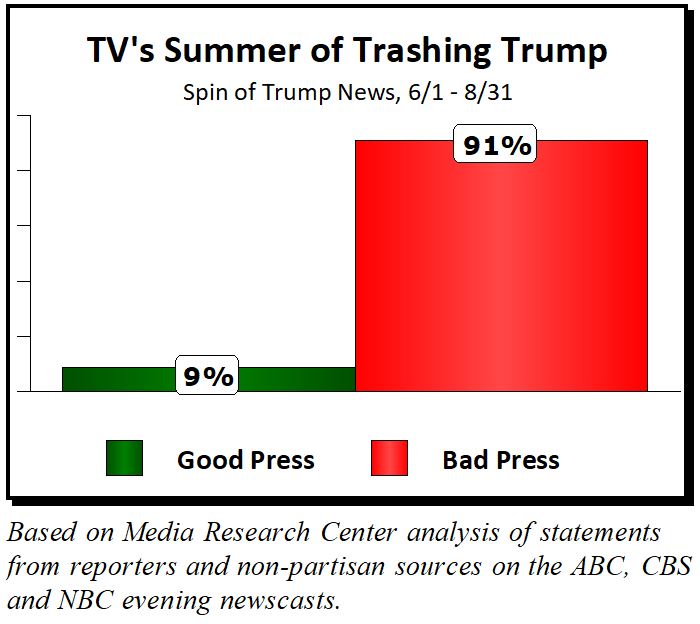 Since Inauguration Day (January 20), Media Research Center analysts have reviewed every mention of President Trump and top administration officials on ABC’s World News Tonight, the CBS Evening News and NBC Nightly News, including weekends. As of August 31, coverage of the administration has totaled nearly 74 hours (4,418 minutes) of airtime, or about 39 percent of all evening news coverage.

For comparison purposes, coverage of the Obama administration in all of 2015 and 2016 totaled 59 hours (3,544 minutes), or roughly 10 percent of the available broadcast airtime. In other words, Trump has already received more coverage in his first 224 days in office than Obama received in his final two years as President.

Analyzing the networks’ spin makes it clear that the goal of all of this heavy coverage is not to promote the President, but to punish him. In June, July and August, broadcast evening news coverage of Trump was 91 percent negative — worse than the astounding 89 percent negative spin we calculated during the first three months of the administration, usually a traditional honeymoon period for new presidents.

The networks’s aggressive anti-Trump spin has been constant throughout 2017, as it was during the presidential campaign last year. The closest the evening newscasts came to achieving balanced coverage was in April, when a few reporters and analysts praised the President’s use of cruise missiles to punish the Syrian regime for a chemical weapons attack. Yet network coverage that month was still skewed against Trump by a greater than four-to-one ratio (82% negative, vs. 18% positive).

The rate of TV coverage has been intense. Early in the year, the networks focused on the Trump presidency as if it were a national crisis, with White House news consuming almost half (49%) of all evening news airtime in January, February and March. That rate subsided in April and May (see chart), and has averaged 32 percent over the past three months — more than triple the rate of coverage of the last two years of the Obama administration (10%), but a significant decline compared to the earliest days of the administration.

It remains to be seen whether this drop in Trump presidential coverage is permanent, or merely reflects the traditional decline in political news during the summer months.

Four topics consumed more than half (53%) of all Trump news from June to August. The networks’ favorite topic was the ongoing Russia investigation, which consumed 415 minutes of airtime (27% of all Trump news) during the past three months. But the frenzied coverage of late spring has abated. In June, the three evening newscasts devoted 236 minutes to the probe; that fell to 140 minutes in July and just 40 minutes in August.

A key difference, of course, is that the ObamaCare coverage unfolded over the course of the spring and summer, while the Charlottesville coverage was contained in an intense week of coverage in mid-August.

There was far less media spin regarding President’s handling of the showdown with North Korea, with only 57 negative statements and nine positive ones, for an 86% bad press score. Most of the coverage has actually been neutral, with the negative press clustered around Trump’s “fire and fury” threat to the North in early August.

The networks’ aggression in covering Trump contrasts with their docile, often adoring coverage of President Obama. Both Presidents are, of course, highly controversial — the key difference is that Obama’s policies matched the liberal media’s preferences, while Trump’s agenda clearly clashes with the establishment media’s world view.

On Friday’s Morning Joe, MSNBC analyst Mark Halperin gave the game away when he admitted that Trump “will get good coverage, if he works with Democrats, for as far as the eye can see. It will produce more liberal policies, which a lot of people in the media like.” All Presidents deserve critical news coverage from time to time, but the relentlessly hostile coverage Trump has seen thus far is as much a reflection of the media’s ideological bias as anything else.