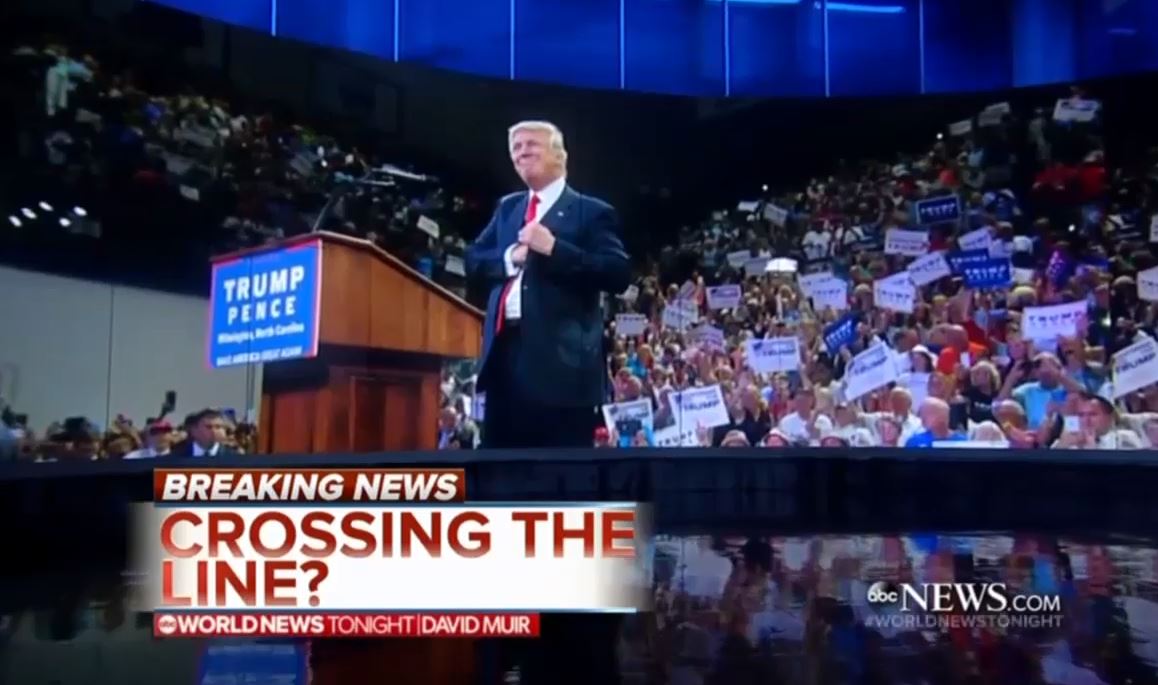 In the twelve weeks since the party conventions concluded in late July, Republican presidential nominee Donald Trump has received significantly more broadcast network news coverage than his Democratic rival, Hillary Clinton, but nearly all of that coverage (91%) has been hostile, according to a new study by the Media Research Center (MRC).

Our measure of campaign spin was designed to isolate the networks’ own slant, not the back-and-forth of the campaign trail. Thus, our analysts ignored soundbites which merely showcased the traditional party line (Republicans supporting Trump and bashing Clinton, and vice versa), and instead tallied evaluative statements which imparted a clear positive or negative tone to the story. Such statements may have been presented as quotes from non-partisan talking heads such as experts or voters, quotes from partisans who broke ranks (Republicans attacking Trump or Democrats criticizing Clinton), or opinionated statements from the reporter themselves.

Additionally, we separated personal evaluations of each candidate from statements about their prospects in the campaign horse race (i.e., standings in the polls, chances to win, etc.). While such comments can have an effect on voters (creating a bandwagon effect for those seen as winning, or demoralizing the supports of those portrayed as losing), they are not “good press” or “bad press” as understood by media scholars as far back as Michael Robinson’s groundbreaking research on the 1980 presidential campaign. 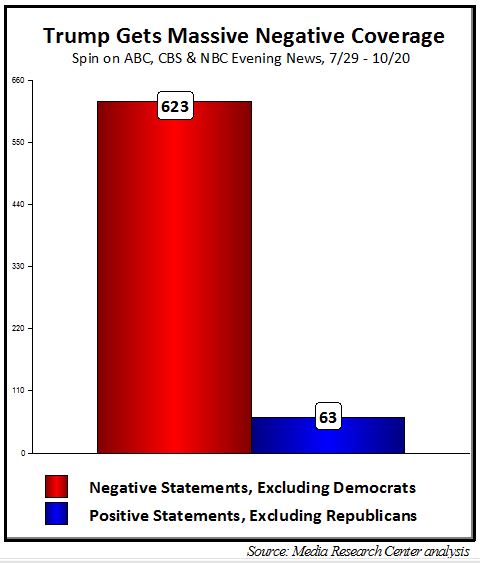 The results show neither candidate was celebrated by the media (as Obama was in 2008), but network reporters went out of their way to hammer Trump day after day, while Clinton was largely out of their line of fire.

Even when they were critical of Hillary Clinton — for concealing her pneumonia, for example, or mischaracterizing the FBI investigation of her e-mail server — network reporters always maintained a respectful tone in their coverage.

This was not the case with Trump, who was slammed as embodying “the politics of fear,” or a “dangerous” and “vulgar” “misogynistic bully” who had insulted vast swaths of the American electorate. Reporters also bluntly called out Trump for lying in his public remarks in a way they never did with Clinton, despite her own robust record of false statements. [For a flavor of the kind of coverage Trump has been receiving from the Big Three networks this year, watch the video embedded below.]

As for those “horse race” assessments that we excluded from our “good press/bad press” measure, those were decidedly anti-Trump as well. Out of 569 such statements about the health or prospects of Trump’s campaign, 85% (486) were negative, vs. 15% (83) that were positive. For Clinton, the spin was reversed: out of 432 assessments of her status in the race, 62% (268) were positive, vs. just 38% (164) that were negative.

Thus, judging by their own coverage, network reporters have consistently painted Clinton as the most likely to win, but they have inexplicably spent most of their time trying to dismantle the underdog in the race while giving the frontrunner much lighter scrutiny.

As noted above, more than half of Trump’s coverage (440 minutes, or 56%) focused on the various controversies surrounding his candidacy, while only about 38 percent of Clinton’s airtime was spent on her controversies (185 minutes).

By far, the top topic since the party conventions has been the issue of Donald Trump’s treatment of women, especially the 2005 Access Hollywood tape (which received nearly 50 minutes of evening news coverage) and the unproven allegations from several women that he engaged in inappropriate conduct in the past (26 minutes).

Add it all up, and Trump’s alleged sexist behavior or rhetoric has totaled 102 minutes of news coverage since the conventions. In contrast, references to Bill Clinton’s past treatment of women, and Hillary Clinton’s role in covering up her husband’s wrongdoing, amounted to less than seven minutes of coverage during this same period, a roughly 15-to-1 disparity. 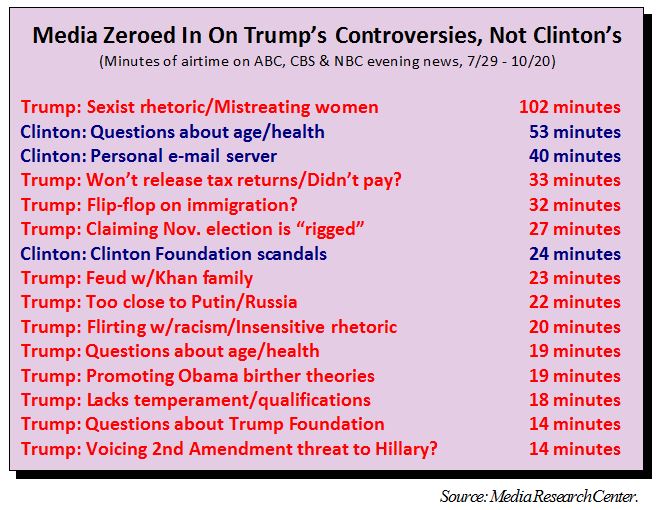 Other Trump controversies were given robust coverage: the issue of his tax returns (33 minutes), his concern that the November election could be “rigged” (27 minutes), and suggestions that Trump and his aides are too close to Putin’s Russia (22 minutes).

In contrast, controversies involving Hillary Clinton received far less attention. Her “basket of deplorables” comment received just seven minutes of total coverage, while barely two minutes (134 seconds) was spent talking about her handling of the 2012 attack in Benghazi when she was Secretary of State.

Bill Clinton’s crack that ObamaCare was a “crazy system” was limited to just 140 seconds of evening news coverage, even though it signaled the kind of intra-party split that would surely have received far more coverage if it had been a Republican vs. a Republican.

Just last week, a Quinnipiac poll found that more than half of all voters (55%) thought the media’s coverage had been biased against Trump. With coverage like this, the question is, what are the other 45 percent thinking?