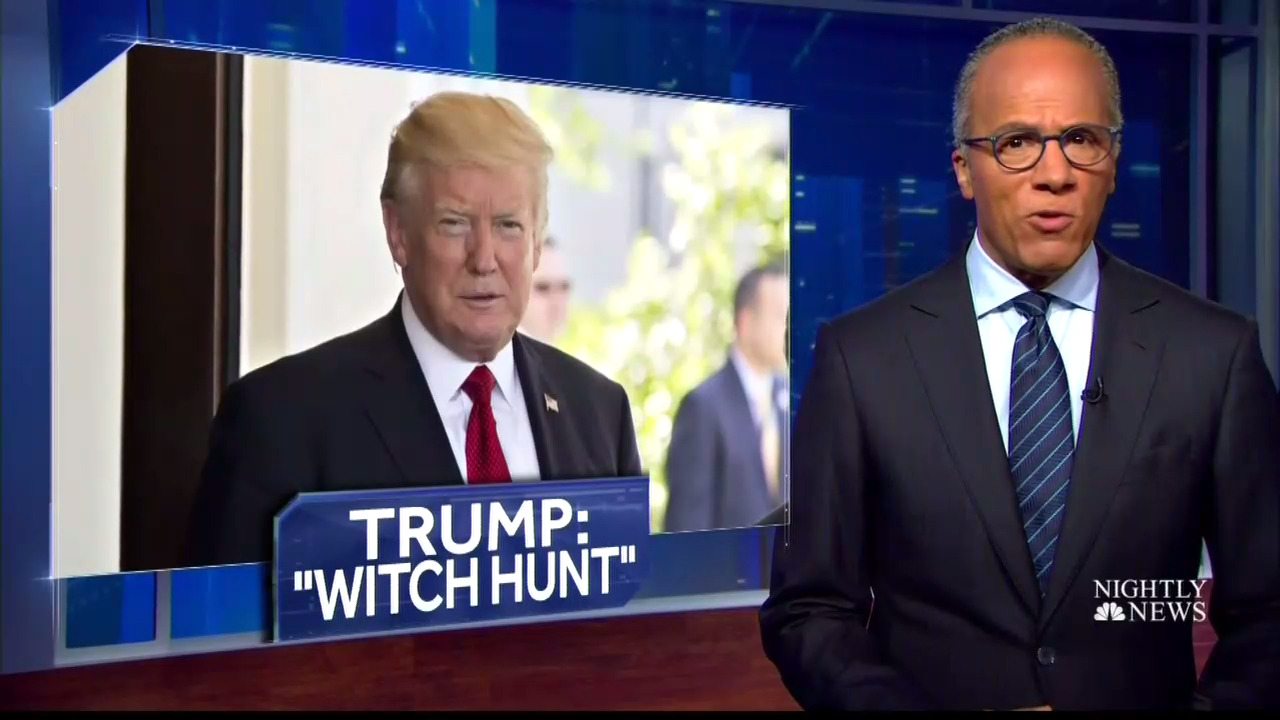 The liberal media are currently up in arms over President Trump’s labeling of the investigation into Russian hacking and the 2016 presidential campaign as a “witch hunt.” All three broadcast networks led their Thursday evening newscasts with Trump’s use of the phrase, with NBC’s Lester Holt describing Trump as “lashing out.”

On CNN, 8pm host Anderson Cooper blasted Fox News hosts for echoing Trump: “If you turn on the President’s favorite TV channel lately, you’d think it was based in Salem, Massachusetts instead of midtown Manhattan.” On the same show, CNN media reporter Brian Stelter dismissed the phrase as merely a strategy to “downplay, deflect and deny” the seriousness of the charges.

A brief stroll down memory lane:

“There are some who describe that Benghazi hearing that she went through, Ted, some describe that as a ‘witch hunt’ and this could not be the first time that the other party has gone after the Clintons and just dug and dug and I think of Whitewater in the first term. Now, it’s Benghazi and I’m not suggesting the Clintons are perfect. I’m asking what is it about them that attracts these witch hunts or, dare I say, these vast right-wing conspiracies?”
— Host Tavis Smiley to actor/friend of the Clintons Ted Danson on his eponymous PBS show, November 20, 2015.

“We have the committee, the Benghazi committee this week. Well, she’s going to murder them because it has been a witch hunt. It has been partisan. It’s a great opportunity for her.”
— Veteran journalist Carl Bernstein on CNN’s Reliable Sources, October 18, 2015.

“I’ve said it before and I will say it again: There has been a witch hunt against every prominent person of color that has served alongside the President. And this is part of it.”
— MSNBC’s Richard Wolffe on Now with Alex Wagner, November 27, 2012, talking about criticism of Susan Rice for her Benghazi lies.

Investigating Obama’s IRS Targeting of Conservatives Was a “Witch Hunt” 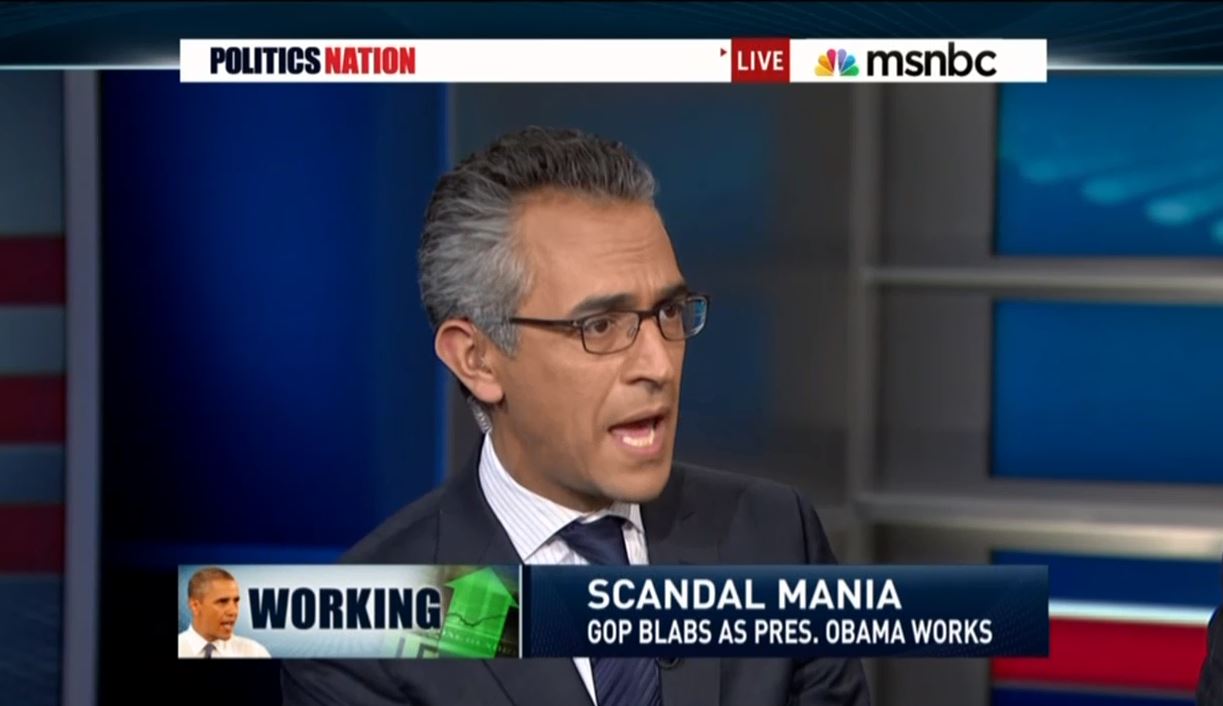 “You would think they [Republicans] may have learned something from their experience in the Clinton years where — you know what? — going after scandals and, you know, in that case, it was all the way to impeachment, really did nothing to harm President Clinton’s numbers, in fact. They just kept getting higher and higher, and the economy was part of that, but also this witch hunt was another part of it....Republicans have to get onto a position that voters like and stop personalizing it, because otherwise they’re going to face a disaster in 2016, and they’ll lose their third in a row.”
— MSNBC.com executive editor Richard Wolffe talking about the investigation into the IRS targeting of conservative groups, MSNBC’s PoliticsNation, June 6, 2013.

“The hearing [on radical Islam] hasn’t even started yet and already you are being compared to Joe McCarthy, hell bent on a witch hunt....There are a lot of Muslim-Americans who are concerned about it. They’re gonna feel alienated because of it. They are fearful of it. They’re fearful of Islamophobia, more Islamophobia, in this country. How do you avoid that? Or do you care if that’s a byproduct?”
— Co-host Meredith Vieira to Rep. Peter King (R-NY) on NBC’s Today, March 9, 2011.

Investigating Bill Clinton’s Perjury and Obstruction Was a “Witch Hunt”

“I think that in history, I mean you know were talking 50 years from now, will be seen as his shining moment, that he stood up to that witch hunt. I don’t see that as a big badge of dishonor for Clinton....I’m glad he lied. He lied about something that deserves a lie. When he disputed the word ‘is’, I was like, ‘you go girl!’ You tell them that. That was like the shining moment of his presidency.”
— Bill Maher, host of ABC’s Politically Incorrect, October 13, 2000 Chris Rock Show on HBO.

“This guy [Ken Starr] is leaving as a pious prosecutor, an inept prosecutor, someone who engaged in partisan witch hunts for whatever the reasons.”
— Wall Street Journal Executive Washington Editor Al Hunt on CNN’s Capital Gang, July 3, 1999.

“Speaker Wright, during McCarthy’s sort of communist witch hunt, the really turning point was when one person being grilled by the Senator said ‘ do you have no decency.’ Do you see anybody with the credibility in Washington right now to ask that same question?”
— Matt Lauer talking about Clinton’s impeachment with former Democratic House Speaker Jim Wright, who resigned over ethical problems, December 21, 1998 Today.

“History will eventually record that Washington’s excruciating investigative culture of perjury traps and sexual witch hunts was a greater threat to the republic than Clinton’s illicit sex and lying, no matter how sordid and stupid they were.”
— Newsweek’s Jonathan Alter, October 5, 1998 issue.

“Couldn’t this be just a witch hunt, couldn’t the Democrats and President Clinton’s people who’ve been defending him all these months be right, that even though he screwed up there’s some political motivation there. Couldn’t that be right?”
— Good Morning America co-host Lisa McRee to humorist P.J. O’Rourke, September 10, 1998.

“Lots of people in Washington are expecting the White House to go on the offensive with regard to Kenneth Starr and his investigation, and people are expecting detailed questions to leak out of that grand jury testimony, questions that make Kenneth Starr and his attorneys look like zealots who are on some sort of witch hunt. Do you think that might happen?”
— Co-host Lisa McRee to Washington Post media reporter Howard Kurtz, on the August 19, 1998 Good Morning America.

“We don’t live in Salem and I think the country is sick of the witch hunt....The notion that Ken Starr would indict this woman for a possible consensual relationship, if it existed, is a public relations disaster and I think a legal disaster also in the terms of how this country operates and what we stand for.”
— Newsweek’s Eleanor Clift on the McLaughlin Group, April 4, 1998.

Investigating Chinese Espionage and DNC Donations Was a “Witch Hunt”

“I’m suspicious of the Republicans here. I think they’re trying to make some political hay. It feels like ‘Who lost China?’ and a lot of witch hunts of the past where they see a chance to make some political capital by us not being tough enough. I don’t think that’s true.”
— Evan Thomas, Newsweek’s Assistant Managing Editor, March 13, 1999 Inside Washington.

All of the Clinton Investigations Were “Witch Hunts”

“White House officials are under no illusions and still expect Republicans to vigorously pursue investigations on other fronts. But they’re also encouraged that DAmatos announcement [of no more hearings] may signal an end to any high profile political witch hunts.”
— Jim Miklaszewski, November 7, 1996 NBC Nightly News, talking about how Clinton’s re-election would affect the investigations.

“Have you any doubt that Kenneth Starr and his deputies are pursuing an agenda that is purely political?...Given that you think this is all just a Republican witch hunt, do you expect the pressure to ease somewhat after the election?
— Some of Bryant Gumbel’s questions to former Clinton business partner and convicted felon Susan McDougal and her attorney, September 17, 1996 Today.