Posted below: the August 29 edition of Notable Quotables, MRC’s bi-weekly compilation of the latest outrageous quotes in the liberal media. This issue: Journalists fret about presidential front-runner Hillary Clinton being victimized by a sexist double standard, while reporters find it admirable that President Obama took a principled stand in favor of his vacation instead of visiting flood-ravaged Lousiana.

At the same time, MSNBC’s Joe Scarborough blames “extreme” talk radio for the “dumbing down” of the GOP that enabled the rise of Donald Trump, while some journalists say their “objectivity” must be sacrificed to the larger goal of stopping “dangerous” Trump from winning the White House. The complete issue, with 24 quotes is posted below (or view the printer-friendly PDF version).

“[Trump’s] emphasis on ‘unhinged,’ and, ‘she doesn’t look presidential,’ is totally code for ‘we shouldn’t elect a woman.’ That is exactly what that is.”
— ABC/NPR political analyst Cokie Roberts on ABC’s This Week, August 7.

“You know, you talked about, in 2008 when you endorsed Hillary Clinton, you wrote, ‘There is still no ‘right’ way to be a woman in public power without being considered a you-know-what.’ Eight years later, have things gotten better?”
— Katie Couric to Gloria Steinem in an August 17 Yahoo! News interview.

“In the philanthropic world, the Clinton Foundation ranks about as high as can you get for a charity. Guide Star gave it a platinum rating, and CharityWatch gave it an A....The political casualties of what some have called a scorched-earth campaign against the Clinton Foundation — who’s going to be hurt the most?”
— Anchor Ashleigh Banfield on CNN’s Legal View, August 24.

“It’s a great organization. It does great work. My son worked for it like ten years ago....If you give to the Global Initiative, the money will get to the right people. It will benefit people.”
— Chris Matthews on MSNBC’s Hardball, August 23. 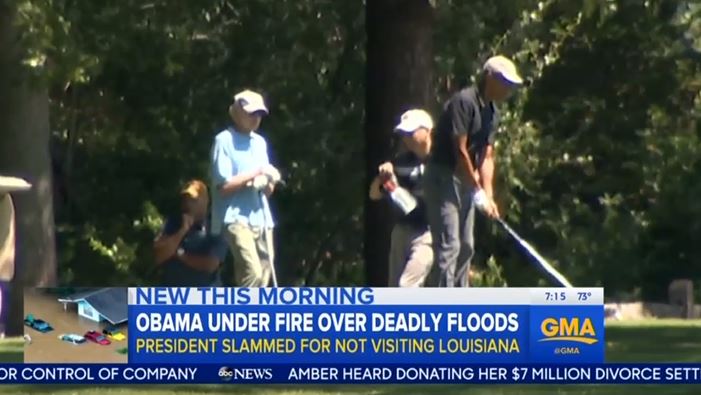 “Obama won’t break off his vacation in Martha’s Vineyard — or stop playing golf on said vacation — to travel to Louisiana. Because he believes he can monitor the situation as well — or better — from where he is. And that the sole reason to go to Louisiana is for the theatrical piece of politics, a piece that he not only rejects but detests.”
— The Washington Post’s Chris Cillizza in an August 18 “The Fix” blog post.

“Peter, there’s no doubt the devastation is horrific throughout Baton Rouge, but the President did immediately sign off on the emergency federal funding that you needed. Why is it so important that the President comes? It costs a lot of money, a lot of effort, and right now Louisiana needs that money, needs resources.”
— MSNBC Live anchor Stephanie Ruhle on August 22 to Peter Kovacs, editor of Louisiana’s The Advocate, which had earlier chastised the “optics of Obama golfing while Louisiana residents languished in flood water.”

“Even before this storm, Louisiana, as a state, had really been on the brink of economic disaster. Don’t blame me for saying so, but the state coffers, honestly, were really, really, really drained by the fiscal policies of previous governor, Bobby Jindal — intense tax-cutting over his time as governor that really, really made the state broke at an emergency level.”
— MSNBC’s Rachel Maddow on the August 18 edition of her eponymous 9pm ET program.

Pressing Hillary to Be Even More Left-Wing than Obama

“President Obama, some call the Deporter-in-Chief. You have alluded already to — your priority will be criminals, but how do you walk back the deportations? There are people who are not criminals that are deported daily from this country. How do you walk back the deportations, comply with the law, and not inherit the title of Deporter-in-Chief?”
— Telemundo correspondent Lori Montenegro to Hillary Clinton at the joint conference of National Association of Black Journalists and National Association of Hispanic Journalists, August 5.

Journalists Must Drop All Pretense and Oppose Trump 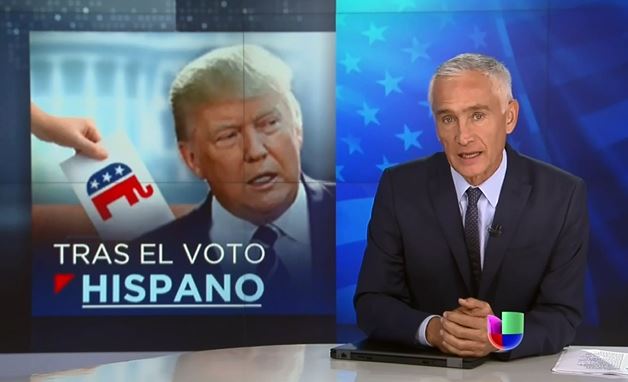 “It doesn’t matter who you are — a journalist, a politician or a voter — we’ll all be judged by how we responded to Donald Trump. Like it or not, this election is a plebiscite on the most divisive, polarizing and disrupting figure in American politics in decades. And neutrality is not an option. The day after the election will be too late....If a candidate is making racist and sexist remarks, we cannot hide in the principle of neutrality. That’s a false equivalence....Judgment day is coming. Will you have peace of mind come November 9th?”
— Univision and Fusion news anchor Jorge Ramos in an August 23 article posted at Time.com.

“If you’re a working journalist and you believe that Donald J. Trump is a demagogue playing to the nation’s worst racist and nationalistic tendencies, that he cozies up to anti-American dictators and that he would be dangerous with control of the United States nuclear codes, how the heck are you supposed to cover him?...It is journalism’s job to be true to the readers and viewers, and true to the facts, in a way that will stand up to history’s judgment. To do anything less would be untenable.”
— Jim Rutenberg in an August 8 New York Times front-page story, “The Challenge Trump Poses to Objectivity.” 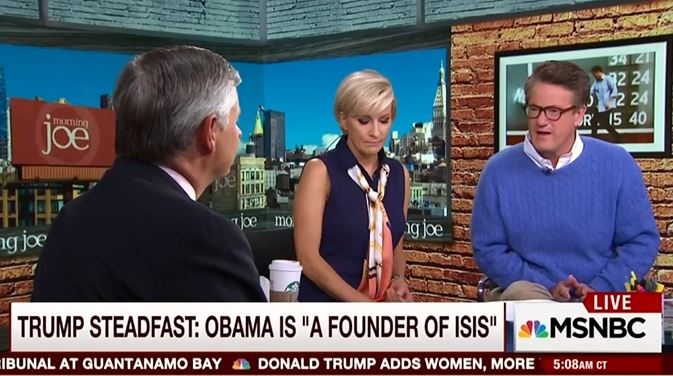 “The venom started in the early ’90s with basically talk radio started to get more and more powerful and right wing talk radio started to really pummel their position. And then Fox News came in with their sort of unbalanced right-wing position. And then you had MSNBC coming in with that left-wing position. So that’s, I think, what happened. That’s exactly what I think happened.”
— Co-host Joy Behar on ABC’s The View, August 12.

“Saying this [Donald Trump’s appeal for support] is an outreach to black people, that is a lie, and we all know that it’s just a lie....It is the most insidious kind of bigotry. It is the kind of bigotry that says, ‘I will knock you down while I pretend to pick you up.’ It says that ‘I am not talking to you, I’m talking to the guy behind you or over your shoulder.’ It is the kind of bigotry that says, ‘I am urinating on you and telling you to dance in the rain.’...The only people taking it seriously is white people.”
— New York Times columnist and CNN political commentator Charles Blow on CNN’s New Day, August 24.

Trump Will Screw Blacks by Bringing Back “Trickle Down Economics”

“Trump may be asking ‘what do you have to lose?’ as a rhetorical question, but there’s an answer to it....Black Americans, like all Americans, would stand to lose plenty under President Trump. They’d have to put up with his inaccurate stereotyping of African Americans and hostility to the Black Lives Matter movement. From a pocketbook standpoint, his protectionist views could trigger trade wars and higher consumer prices. And he’d revive trickle-down economics, a major contrast to Obama policies that have directed resources to low-income rather than high-income Americans.”
— USA Today commentary editor Jill Lawrence in an August 23 column.

Blaming Conservatism for Madness of Trump

“Modern conservatism has proven to be not a philosophy, but a huge dose of badly manufactured absinthe. It squats in an intellectual hovel now, waiting for its next fix, while a public madman filches its tattered banner and runs around wiping his ass with it....To argue that responsible government requires that you treat sensibly a party that has gone as mad as the Republicans have is to argue for government by delirium. Trump doesn’t need an intervention. His party does.”
— Former Boston Globe Magazine writer Charles Pierce in an August 5 post at Esquire.com. 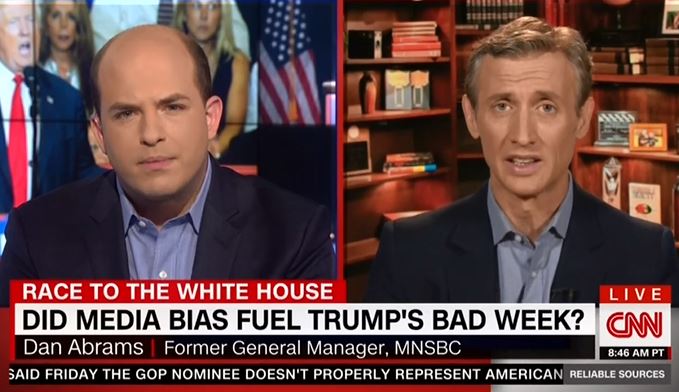 “The media — both conservative and liberal — doesn’t like Donald Trump, as a whole. It doesn’t mean every individual, but let’s admit that. But what’s not true is that somehow they love Hillary Clinton, because they really don’t like her either....The truth is, many in the media, I think, are to the left of Hillary Clinton. And, as a result, they don’t like her from the left.”
— ABC chief legal affairs anchor Dan Abrams on CNN’s Reliable Sources, August 7.

“As he once said, he hasn’t changed since second grade. Keep that in mind as you hear about some of the things that he did, such as throwing rocks at a toddler in the yard right across from his own home, pulling the pigtails of one of his classmates, getting into a physical altercation with a teacher that led to his father removing him from school and sending him off to a military boarding school....People who were around him during that time saw him as quite a ruffian, really.”
— Washington Post senior editor Marc Fisher in an August 22 interview on CBS This Morning about the Post’s new book, Trump Revealed: An American Journey of Ambition, Ego, Money and Power.

“What you, my friend, were tasked to do, you have done and done beautifully. You gave voice to underserved voices in the media arena, and you did it — it was a show that was raw and poignant and funny and smart and all those things.”
— Ex-Daily Show host Jon Stewart to just-cancelled Comedy Central host Larry Wilmore on his Nightly Show, August 18.

What Will We Miss Most When the Dear Leader Departs?

Host Charlie Rose: “How do you think he’s [Barack Obama] been as president?”
Actress Amy Schumer: “I love him. I’m gonna miss him so much. I’m so sad.”
Rose: “What are you gonna miss? The style? The intelligence?”
— Exchange on PBS’s Charlie Rose, August 19.

Weeping Over “Wave of Wonderfulness” at Hillary’s Convention

“It meant an enormous amount to me because I just felt the press of history behind me. I felt my grandmother and my mother, imagining what they would feel. My mother was born before women could vote. It’s very recent that we have been admitted to the United States with our rights, and so I felt it was a moment in history, and I felt like I was surfing this huge wave of wonderfulness.”
— Actress Meryl Streep on CBS This Morning, August 10, talking about her speech championing Hillary Clinton at the Democratic National Convention.