Today’s installment of the Media Research Center’s “Best Notable Quotables of 2015,” as selected by our 39 expert judges, the “The Barbra Streisand Political IQ Award for Celebrity Vapidity.”

Winning this award, former Star Trek actor George Takei, who in a local news interview on June 30 spluttered out a racist condemnation of Supreme Court Justice Clarence Thomas after being asked about Thomas’s dissent in the gay marriage ruling:

Coming in second: actress Ashley Judd, who on the January 30 edition of Larry King’s post-CNN show, Larry King Now (shown on Ora.TV, the Russian TV channel RT, and Hulu), she slobbered all over the idea of a President Hillary Clinton:

“I mean, obviously, I love Hillary Rodham Clinton....And so seeing her talk about early childhood vulnerability and brain development. Man, that woman is stout. She is stout. So yes, I will be all in when the time comes....I think she might be the most overqualified candidate we’ve had since, you know, Thomas Jefferson or George Washington.”

In third place: Joy Behar, co-host of ABC’s The View, who on the October 14 program gushed about the Democratic debate held the previous night:

“I actually am aroused by him [Bernie Sanders]. I’m serious. I find him to be eye candy, not ear candy, eye candy....I like an old Jewish guy who’s a socialist. That’s my type of guy. Everybody is talking about [former Maryland Governor Martin] O’Malley and how hot he was. But to me, Bernie is hot.”

Finally, on July 22, Arsenio Hall objected to a comment by Florida Senator Marco Rubio, who had criticized Donald Trump by saying, “We already have a President now that has no class.” Hall, presumably angered by the implied swipe at President Obama, tweeted: 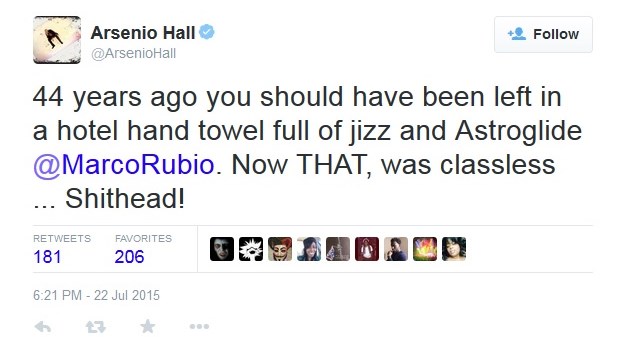 Tomorrow, we end 2015 with a look back at this year’s Quote of the Year (it’s really dumb). As always, you can check out all of the awards at www.MRC.org.