Eight Years of Bias: The Liberal Media vs. the War in Iraq 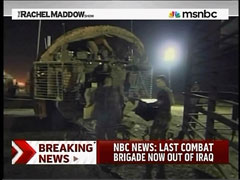 The peaceful departure of the last U.S. combat forces from Iraq this week was another milestone towards the successful end of a war that many liberal journalists declared lost four years ago. Since early 2009, the war in Iraq has been a relatively low priority for the national press, which has focused on decrying the war in Afghanistan and cheerleading the Obama administration’s aggressive domestic agenda.

But over the last eight years — since journalists began decrying what they termed the Bush administration’s “rush to war” in August 2002, a full seven months before the first bombs fell — the Media Research Center has analyzed TV coverage of the Iraq conflict. The bottom line: reporters were obvious skeptics from the very beginning, and did all they could to push withdrawal and defeat before George W. Bush’s surge strategy saved the day.

A quick review of the media’s approach over the past eight years, with many links to the additional information that can be found at www.MRC.org:

■ Pre-War Opponents. Contrary to prevailing liberal mythology, all three networks (especially ABC) tilted their pre-war news in favor of Bush administration opponents. Covering the congressional debate over using force, for example, the networks gave a majority of soundbites (59%) to the losing anti-war side, or roughly double the percentage of Senators and Representatives who actually voted against using force (29%).

Despite the claim that the media never "asked tough questions," an MRC study of all Iraq stories on ABC’s World News Tonight during September 2002 discovered that ABC reporters were nearly four times more likely to voice doubt about the truthfulness of statements by U.S. officials than Iraqi claims.  Reporters also sanitized the "peace" movement, masking the radical affiliations of left-wing organizers while showcasing more sympathetic "middle class" demonstrators. 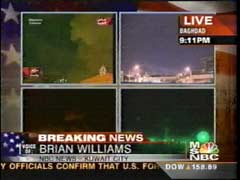 ■ Combat Coverage. When the U.S. and its coalition partners began carefully targeted bombing of government buildings Baghdad on March 21, 2003, then-MSNBC anchor Brian Williams compared it to notorious attacks during World War II that killed tens of thousands of innocent civilians: “That vista on the lower-left looks like Dresden, it looks like some of the firebombing of Japanese cities during World War II.”

Writing in the New York Times the next morning, reporter David Chen compared it to the terrorist attack on New York City: “For some, the bombing brought back particularly visceral and chilling memories. They could not help thinking about Sept. 11, and how New York, too, was once under assault from the skies.”

But worst of all was NBC/MSNBC correspondent Peter Arnett, who reported lies about U.S. use of "cluster bombs" against Iraqi civilians. Arnett was later fired for denouncing the U.S. in a Saddam propaganda video just days before the regime toppled: “Clearly, the American war planners misjudged the determination of the Iraqi forces....Now America is re-appraising the battlefield, delaying the war, maybe a week, and re-writing the war plan. The first war plan has failed because of Iraqi resistance; now they are trying to write another war plan.”

■ Capture of Saddam Hussein: When the former Iraqi dictator was captured in December 2003, ABC anchor Peter Jennings sniffed that “there’s not a good deal for Iraqis to be happy about at the moment. Life is still very chaotic, beset by violence in many cases, huge shortages. In some respects, Iraqis keep telling us life is not as stable for them as it was when Saddam Hussein was in power.”

For a despot who killed hundreds of thousands of his own people, the coverage was surprisingly sympathetic. “The tyrant has fallen. But for some, he’s a fallen hero,” CBS’s Kimberly Dozer relayed. “Saddam Hussein also gave Iraqis dignity and pride. He became a symbol of defiance across the Arab world, never backing down from a fight....Those who loved him and those who hated him still can’t separate the man from the country in their minds. For many, his humiliation is their own.” 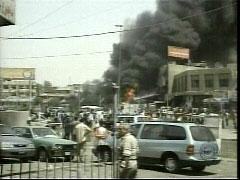 ■ Waves of Bad News. In 2005, Iraq was a mixed bag — historic democratic elections, but continued violence. But an MRC study that year showed the network coverage emphasized the bad news. Out of 1,712 evening news stories, the lion's share (848, or 61%) focused on U.S. casualties, bombings, kidnappings or political setbacks, compared to just 245 (14%) that reported positive developments. (The remainder were mixed or neutral.) An MRC study of cable news coverage in 2006 found that all three networks emphasized bad news, although the Fox News Channel aired nearly as many stories about coalition success in Iraq (81) as CNN (41) and MSNBC (47) combined.

The media’s inordinately negative tone was both frustrating and perplexing to those with first-hand knowledge of the situation. On November 22, 2005, for example, the Washington Times ran a lengthy op-ed from an anonymous Marine in Iraq: “Morale among our guys is very high. They not only believe they are winning, but that they are winning decisively. They are stunned and dismayed by what they see in the American press, whom they almost universally view as against them....They are inflicting casualties at a rate of 20-1 and then see s*** like ‘Are we losing in Iraq?’ on television.”

■ Hyping Misdeeds, Hiding Heroes. In 2006, the networks jumped on unproved charges of a Marine "massacre" at Haditha, with more than 200 minutes of coverage in three weeks. Referring to the killing of hundreds of Vietnamese civilians back in 1968, ABC’s Terry Moran wondered “Will Haditha be the My Lai of the Middle East?” But allegations of a heinous war crime have so far been unfounded: Of the eight Marines originally charged, one has been found not guilty and charges against six others have been dismissed. The trial of the last Marine, Staff Sgt. Frank D. Wuterich, begins next month.

While the networks were excited by charges of wrongdoing against U.S. servicemen, an MRC study of coverage from 2001 through 2006 found those news organizations gave just 52 minutes to the stories of America's highest-decorated soldiers in the war on terror. Fourteen of the top 20 medal recipients up to that time had gone completely unmentioned by the broadcast networks.

■ Battling Bush’s Surge: The Bush administration’s attempt to salvage the situation in Iraq met with a blizzard of hostile coverage in January 2007. Ex-NBC Nightly News anchor Tom Brokaw scoffed that sending more troops to Iraq would "seem to most people...like a folly." NBC’s White House reporter David Gregory suggested even White House insiders have lost faith: "As the President prepares to start a new phase of the war in Iraq, the White House is fending off charges that key figures in the administration have concluded the war is lost." Over on CBS, correspondent Lara Logan counseled that an earlier experiment adding 12,000 troops into Baghdad "made absolutely no difference....In fact, security here in Baghdad got even worse."

The networks remained openly skeptical eight months later as General David Petraeus gave Congress his first status report on the operation. “Insurgent attacks are down,” ABC’s Terry McCarthy noted on the September 9, 2007 World News Sunday, the day before Petraeus testified before Congress. But “Iraq remains a very violent place....Life in central Iraq is still deadly dangerous.” CBS’s David Martin contended: “Victory is not at hand, not even in sight.”

■ Little Time for Good News. By late 2007, however, the surge strategy denigrated by network correspondents had borne obvious fruit. But the reaction of the broadcast evening newscasts was to begin walking away from the Iraq story. Network coverage dropped from 178 stories/month in September 2007 to just 68 stories/month in November 2007. By February 2008, coverage had dropped to barely 40 stories/month.

The end of combat operations is really a postscript to what should have been the big headline, the success of the U.S. surge strategy in smashing the al-Qaeda fueled insurgency that was plaguing Iraq in 2006.
Iraq Anti-Military Bias ABC CBS NBC New York Times History