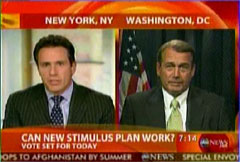 Wednesday’s Good Morning America led into an interview with House Republican Leader John Boehner about the massive Democratic “stimulus” package with a deluge of horror stories about the awful economy: an elderly man who froze to death after failing to pay his power bills; a new report declaring the need for $2 trillion in new infrastructure spending; and an unemployed man who killed his family and himself.

“You know this situation -- you don't need me to tell you about it, we hear about job losses being reported every day,” news anchor Chris Cuomo told viewers, “so the pressure is on lawmakers” to “get past the age-old battle over tax cuts versus spending” and pass the massive spending bill. Making it perfectly obvious which side he’s on, Cuomo declared “a promising signal for all of us” that Boehner seemed to come out of a meeting with President Obama “looking to make a deal.”

But the economic horror stories that ABC pushed prior to showing the interview with Boehner (taped Tuesday afternoon) all contain significant omissions. The “unregulated” power company being blamed for the elderly man’s death is owned by the local government, not some greedy capitalist utility. The new report arguing for massive spending on roads and bridges was released two months early to influence the stimulus vote. And the man who tragically killed his family did not lose his job because of cost-cutting or anything related to the economy, but after being investigated for possible fraud.

Interviewing Boehner, Cuomo was mainly a cheerleader for the Democratic bill: “77,000 jobs lost on just Monday. When you look at how to fix this situation, can you do it without investing in industry, without spending? Do you think you can do it by just cutting taxes?” Cuomo also hit Boehner with the complaint of House Speaker Nancy Pelosi that the faulty implementation of the TARP program should be laid at Republicans’ feet, even though relatively few House Republicans supported the program back in the fall: “Nancy Pelosi says it's your party’s fault. Fair criticism?”

Cuomo did, at least, acknowledge how the TARP was a symbol of “wasteful spending” -- a curious point, since the new spending program is much bigger, was also assembled without hearings or much debate, and does not even carry the promise of the TARP loans to banks that the money will be repaid to the government when the economy improves.

After a segment about icy weather across the Midwest and East, reporter Barbara Pinto reported on the story of an elderly man who died in Michigan after failing to pay his electric bills. As the on screen graphic read: COLD TRAGEDY: IS POWER COMPANY TO BLAME?, Pinto explained: 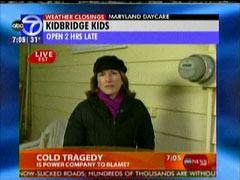 In the dead of winter, anger is boiling over on South Chilson Avenue over what happened inside this house to 93-year-old Marvin Schur....Schur had fallen months behind on his electric bill so the power company installed a limiting device on his meter. Use too much power and the device trips, cutting off all electricity. The homeowner then needs to go outside to hit a reset button. It's unclear whether the 93-year-old Schur knew the limiter had been placed on his meter or was told how to reset it....

The power company says it has used limiters on delinquent bill payers for 18 years without incident until now....Now the power company in this part of Michigan is unregulated, so they make their own rules about how to handle customers who fall behind.

But Pinto’s complaint about how the power company is “unregulated” omits the fact that Bay City Electric, Light & Power is actually a municipal utility owned by the local government of Bay City, Michigan. So it was a government worker who put the limiter on Marvin Schur’s electric meter, not an “unregulated” private sector worker.

A few moments later, in the news update segment, news anchor Chris Cuomo added to the sense of urgency with this brief item, over the graphic “Failing Infrastructure”: 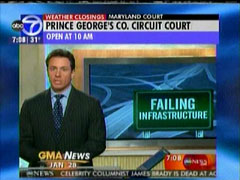 The roads you drive to work, the bridges you cross, here's the news, they are failing in a big way. A new report from some of the nation’s top engineers gives our aging infrastructure a grade of a low D. The needed repairs to fix them, an estimated $2 trillion.

But according to today’s New York Times, the report is from the American Society of Civil Engineers and was released early to push for more infrastructure spending: “The society had planned to release the report in March, but moved it up to try to influence the debate over the $825 billion economic stimulus bill being negotiated by the Obama administration and Congress.” For some reason, Cuomo didn’t mention that part of the story.

Then a few minutes later, Cuomo tied a family tragedy to “tough times”: 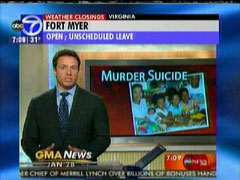 In Los Angeles, a stunned community is struggling to understand how an out-of-work father could shoot his five children, his wife, and then himself. Before killing his family, Ervin Lupoe faxed a letter to a TV station describing how he and his wife had been fired from their jobs at a hospital. He said he thought it was better to end their children's lives than leave them in someone else’s hands. The children ranged in age from two to eight years old....City officials are now trying to raise awareness about the different ways people can get help in these tough times.

But according to the Los Angeles Times, the sad event may have had nothing to do with “tough times,” but possible misconduct on the part of Lupoe and/or his wife: “Evidence was emerging Tuesday evening that the couple had been fired after an investigation into misconduct and had not been laid off as part of cost-cutting....The probe involved allegations of fraud, according to sources familiar with the inquiry, who spoke on the condition of anonymity because the inquiry was ongoing.”

With that as their pessimistic preamble, viewers then saw Cuomo champion the big spending bill to Boehner in an interview taped Tuesday afternoon:

DIANE SAWYER: As we said, today is the day. It's the first big vote on the new President's economic policy. President Obama’s $825 billion stimulus plan, expected to be under vote in the House today. The President took the extraordinary move of meeting with House Republicans Tuesday to try to get last-minute support.

PRESIDENT OBAMA: I don't expect 100% agreement from my Republican colleagues but I do hope that we can all put politics aside and do the American people's business right now.

SAWYER: And just yesterday, you had a chance to speak with House Republican Leader John Boehner about all this, Chris?

CHRIS CUOMO: Yes, we did, and you know this situation -- you don't need me to tell you about it, we hear about job losses being reported every day. The stimulus package is now being valued by some at $900 billion or more so the pressure is on lawmakers. The question, can they get past the age-old battle over tax cuts versus spending? Well, a promising signal for all of us, yesterday the House Republican Whip [sic] John Boehner started the day calling for a blockade of President Obama's plan, but after a major meeting with the President he came out looking to make a deal. [to Boehner] What happened in that meeting to change your mind set?

JOHN BOEHNER: Well, we had a very good dialogue with the President and all of our members. It was open and honest conversation. Clearly, there are some differences but the president was clear that he was going to continue to reach out to us, continue to listen to our ideas and I think we have to remember we're at the beginning of this process.

BOEHNER: Well, you know, we have Democrats and Republicans in America because we do believe that there are different roles for the federal government. The President believes that the government can spend and create jobs. Many of us on the Republican side believe that if we allow American families and small businesses to keep more of what they earn, that we can create jobs and preserve jobs in America much more efficiently.

CUOMO: 77,000 jobs lost on just Monday. When you look at how to fix this situation, can you do it without investing in industry, without spending? Do you think you can do it by just cutting taxes?

BOEHNER: No, it's not -- we're for more than just cutting taxes. What we're concerned about, some of the spending in this bill has nothing to do with creating jobs or preserving jobs. The bill that’ll on the floor today is a bill that has too much spending, too much wasteful spending and buries our kids and grandkids under a mountain of debt.

CUOMO: The idea of wasteful spending comes nowhere more than it does in criticism of how the TARP funds have been spent so far. Let me ask you, where do you think responsibility lies in terms of why we don't know where this money is that's been given to the companies and how it's being spent? When I asked this to the Speaker of the House, Nancy Pelosi, she put it squarely on the Bush administration. Please take a listen to what she had to say:

CLIP OF NANCY PELOSI ON GOOD MORNING AMERICA, JANUARY 13: There is nobody more disappointed in how the Bush Administration executed the TARP law than the members of Congress who sent the bill to them, at their insistence, but with our conditions, which they ignored.

BOEHNER: Well, listen, it's the Treasury Department's problem, and whether it’s the career or political people, that's water over the dam. But the fact is, we’re gonna spend additional money in the TARP to help ailing financial institutions and other sectors of our economy. We need to know how this money was spent.

CUOMO: What's wrong for the American people to say: ‘You in Congress, all of you we put there to watch our backs, you are to blame. Don't talk to me about the Treasury, you could have found out if you had been on it more aggressively.’ Fair?

BOEHNER: Listen, I've been on this, literally, since about two weeks after we passed bill in October. Asking these same questions. I'm as disappointed as Nancy Pelosi is that we don't have answers as yet.

CUOMO: What's the fix, you think, Mr. Representative? Everybody says transparency, accountability, how do you do it?

BOEHNER: Well, listen. We have a serious problem in our economy. There’s no books, there are no books written about how to do this. There is no track to follow. So, we're at the mercy of a lot of very smart people who are going to be giving us advice about what we need to do. The real key for congress, is can we do the right thing?

CUOMO: Alright, Representative Boehner, I appreciate it very much.

CUOMO: And the Representative’s last point is probably the most instructive: The best thing we have going for us in avoiding the politics as usual, is that they don't really know what will work in this situation, so they may not cling to the partisan positions as much. The Representative said February 13 is the date they hope to have a bill on the President's desk.