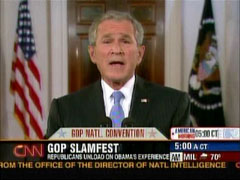 Unlike the celebratory response to the opening nights of the Democratic convention a week ago, the three network morning shows offered restrained recaps of Tuesday night’s speeches at the Republican convention, and continued to portray Alaska Governor Sarah Palin as a liability for the GOP ticket.

But a week earlier, Gregory described Hillary Clinton’s speech as “rousing” and “playful,” and offered no negative adjectives as he replayed soundbites of Clinton attacking John McCain:

GREGORY: Republicans are working to court Clinton supporters this week by reminding them of her attacks against Obama during the primaries....But Senator Clinton made her wishes clear.
CLINTON: No way, no how, no McCain.
GREGORY: She argued that a President McCain would represent more of the Bush years. More war, more job losses, more inadequate health care coverage.
CLINTON: It makes perfect sense that George Bush and John McCain will be together next week in the Twin Cities, because these days they're awfully hard to tell apart.

The most positive declarations about the GOP convention came from CBS’s Early Show, where co-host Maggie Rodriguez declared it a “love-fest” for McCain, with Monday’s silence at the Xcel Energy Center “replaced with a roar like you might hear when the hometown NHL team is playing here, except all the cheers were for John McCain.”

ABC’s Diane Sawyer was far more muted, leading into her convention recap by noting good news for the Democrats: “a new poll out showing that Senator Obama has hit the 50 percent mark for the very first time against Senator John McCain. It's about a five-point increase for Senator Obama, a little post-convention bounce there.” 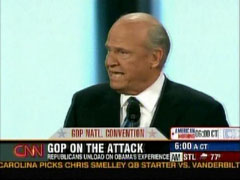 For its part, CNN’s American Morning went even further to portray the Republicans as mean-spirited, with on-screen graphics touting a “GOP Slamfest” and “GOP on the Attack.” Beginning their 6am EDT hour, co-anchor John Roberts claimed that Senator Joe Lieberman “really took a strip off of Barack Obama,” but supported that claim with a clip of Lieberman mildly suggesting that the “gifted and eloquent” Obama lacked the necessary experience:

JOHN ROBERTS: We just heard from Joe Lieberman there extolling the virtues of John McCain and why he would be a good president. But he also -- and to some degree unexpectedly, because he didn't tell me yesterday morning when I talked to him he was going to do this -- really took a strip off of Barack Obama. Let's listen to what he said:
SENATOR JOE LIEBERMAN: Senator Barack Obama is a gifted and eloquent young man, who I think can do great things for our country in the years ahead. But, my friends, eloquence is no substitute for a record. Not in these tough times for America.

An hour later, co-anchor Kiran Chetry referred to the speakers as “ripping into Barack Obama’s record,” and Roberts told reporter Jessica Yelling that “it appears there's been lots of red meat thrown around and that the partisan tone returned here.”

Back on the broadcast networks, correspondents portrayed the convention as apprehensive about the nomination of Sarah Palin as the vice presidential candidate, with NBC’s Gregory touting as important as a video “only now surfacing” of Palin speaking about her son’s deployment to Iraq, exhorting worshippers to pray “that there is a plan and that plan is God’s plan.”

CBS’s Jeff Glor and ABC’s Sawyer also portrayed Palin as beleaguered, with Sawyer suggesting Fred Thompson was “in full defense” last night, and Glor sought out David Gergen for a soundbite. “Some Republicans are nervous,” Gergen opined. “Are there going to be any other rude surprises?”

Now, more on how the big three broadcast networks set up the Palin story at the top of their Wednesday morning shows:

ROBIN ROBERTS: What a night in St. Paul as the Republican Convention really got rolling especially with Fred Thompson's fiery speech and we know tonight a 44-year-old woman who proudly hails from the state of Alaska will take the stage right behind you, Diane, and give that speech of a lifetime.

DIANE SAWYER: Another speech of a lifetime at a convention coming up tonight. Let's tell you a little bit about what's new this morning. There is a new poll out showing that Senator Obama has hit the 50 percent mark for the very first time against Senator John McCain. It's about a five-point increase for Senator Obama, a little post-convention bounce there. And even though we didn't see Governor Palin or her family in the convention hall last night, there are some new pictures out. We'll show you now, the cover of "People" magazine and also word that her future son-in-law Levi Johnston will be joining the family here in the hall tonight. Also, there are pictures that are out from yesterday with -- there she is, First Lady Laura Bush and also with Cindy McCain so we have the pictures to show you....

SAWYER: But in every corner of the hall a buzzing conversation about the vice presidential nominee, Alaska Governor Sarah Palin. Former Senator Fred Thompson in full defense.

FRED THOMPSON: She's a from a small town with small town values but apparently that's not good enough for some of the folks who are out there now attacking her and her family. When she and John McCain get to Washington they're not going to care how much the alligators get irritated. They're going to drain that swamp.

SAWYER: And now the 44-year-old woman must introduce herself to the nation and prove herself ready to be a heartbeat away from the presidency in one high stakes speech tonight.

FRED THOMPSON: She's a courageous, successful reformer who's not afraid to take on the establishment.

RODRIGUEZ: But can she calm the storms around her experience  and her daughter's pregnancy.... 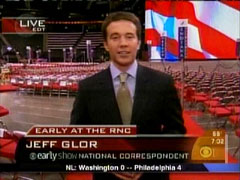 REPORTER JEFF GLOR: But on a night Republicans were trying to answer the question, who is John McCain, many were still asking who is Sarah Palin. McCain's vice presidential pick is here, though holed up, seen in this campaign released photo but nowhere else so far until tonight. All public appearances dropped. Following questions about her firing of Alaska's public safety commissioner, about her former involvement, if any, with Alaska's controversial independence party and especially about her family and the pregnancy of her 17-year-old daughter. The McCain campaign says they knew about all of it.

JOHN MCCAIN: The vetting process was completely thorough, and I'm grateful for the results.

GLOR: But is there more of it?

ANALYST DAVID GERGEN: The reason that some Republicans are nervous now is they're not sure, is there anything else? Are there going to be any other rude surprises?

MEREDITH VIEIRA: And tonight, Alaska Governor Sarah Palin, McCain's running mate, will address this convention, certainly the speech of a lifetime for her. It comes as questions swirl about whether the McCain campaign knew enough about her before she was tapped for this very important job.... 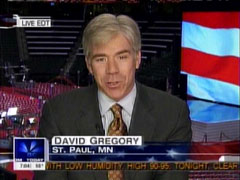 DAVID GREGORY: Competing with the official program of the convention was the intense media scrutiny of Palin, whose only appearance was a private meeting with First Lady Laura Bush and Cindy McCain. News her 17-year-old daughter is five months pregnant has only heightened interest in her family. Bristol Palin and her boyfriend, the baby's father, Levi Johnston were seen along with other relatives boarding a plane in Spokane en route to St. Paul. In Ohio, Senator McCain was pressed on whether he did his homework on Palin.

SENATOR MCCAIN: The entire process was completely thorough and I'm grateful for the results.

GREGORY: But the Washington Post reports that McCain's top vetter only met with Palin the day before she was selected. The hurried nature of the background check raises questions about whether damaging details, both personal and political, were missed. As a political newcomer, Palin's public remarks are only now surfacing, including this speech Palin made at her former church about her son's deployment to Iraq.

SARAH PALIN: Our leaders, our national leaders are sending them out on a task that is from God. That's what we have to make sure that we're praying for. That there is a plan and that plan is God's plan.

GREGORY: Senator Obama has said Palin's family is a private matter but he came up with a new argument for the experience question, citing management of his campaign.

SENATOR BARACK OBAMA: My understanding is that Governor Palin's town of Wasilla has, I think, 50 employees. We've got 2,500 in this campaign. I think their budget is maybe $12 million a year. You know, we have a budget of about three times that just for the month.

GREGORY: A senior McCain adviser tells us that in her speech tonight Governor Palin will provide new and interesting details about her life and her life experience. She will also make the case for why, in her view, Senator McCain is the only man prepared to lead America right now. Meredith?