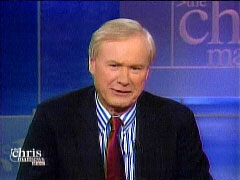 On Sunday’s The Chris Matthews Show, the host used one of Mike Huckabee’s Iowa photo-ops as an excuse to launch into an elitist attack on Republicans and hunters. “Who made killing small animals the test of Republican manhood?” Matthews challenged at the top of his show. Over a clip of a vintage Looney Tunes cartoon, Matthews further upped the ante: “Who declared war on Bugs Bunny?!”

Later with his panel, an appalled Matthews noted how Huckabee “told a reporter that he loved to bag squirrels because he fried ’em up and ate ’em with biscuits and a Coca-Cola. What have we come to!”

Noticing how NBC News chief foreign correspondent Andrea Mitchell was squirming, Matthews asked her, “Are you upset by this Andrea? You must be!”

“Absolutely,” Mitchell confirmed, adding a unique sexist angle: “You don’t see any women out there with a gun.”

Opening the December 30 show, Matthews teased: “Gunplay! Who made killing small animals the test of Republican manhood? Who created the small game hunters test for the presidency? Who declared war on Bugs Bunny?”

After a segment on the leading Democratic contenders’ Iowa prospects, Matthews switched gears: “Before we break, Republican Mike Huckabee has shot to the top of the polls thanks to his Christian credentials, but this week he wanted to show Republicans there’s more to him than his faith, so he went pheasant hunting — and boy, was he proud.”

He then showed a clip of Huckabee, holding rifle and pointing to a row of dead pheasants on the ground: “These three birds all said the would not vote for me on caucus night. You see what happened to them.”

Matthews went on: “It used to be that candidates had to show they liked eating the local food — you know, the blintzes, the Coney Island hot dogs, the Philly cheese steaks. But nowadays they gotta like killing their supper!”

After reviewing how Mitt Romney claimed to be a lifelong “varmint hunter,” how Democrat John Kerry wore a goofy camouflage jacket on a 2004 hunting trip, and how then-gubernatorial candidate George W. Bush shot an endangered bird back in 1994, Matthews played the Bugs Bunny card: “So do Republican voters really believe that using a big gun to kill small varmints really makes someone more qualified to be President of the United States? It all reminds me of Bugs Bunny and good old Elmer Fudd.” 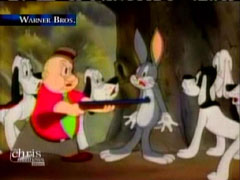 For viewers who might not get the reference, Matthews showed a clip of Elmer Fudd pointing his gun at Bugs: “Now I got you! You’re a dead wabbit!”

Matthews then turned to Newsweek’s Howard Fineman: “Howard, getting back to Huckabee, he told a reporter that he loved to bag squirrels because he fried ’em up and ate ’em with biscuits and a Coca-Cola. What have we come to! What's with the hardware and the gunplay here?”

Fineman cautiously replied, “Uh, limited regional appeal, I would say, on the biscuits. But I’ll tell you what, Huckabee is great at the iconography of politics and Republican campaigns. He really is.”

Fineman: “Fried squirrels and the crosses in the background — he’s doing great with his voters.”

Matthews to Andrea Mitchell: “Are you upset by this Andrea? You must be!”

Mitchell: “Absolutely. You don’t see any women out there with a gun.”

After another round of jokes about eating squirrel, Matthews ruefully ended the segment: “Somewhere out there a 13-year-old boy or girl is thinking, ‘If I’m going to become President, I’d better get myself a rifle.’”
Guns 2008 Presidential NBC The Chris Matthews Show Mike Huckabee