The Worst ‘Notable Quotables’ of the Past 20 Years: Communism 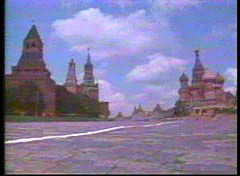 To commemorate the Media Research Center’s 20th anniversary this month, we’ve just published a special expanded edition of our ‘Notable Quotables’ newsletter. This issue contains more than100 of the most outrageous, sometimes humorous, quotes we’ve uncovered over the past 20 years.

Over the next few days, I’ll be writing about some of the more obnoxious quotes we’ve uncovered over the years. To read the full issue, and watch any of the 50 video clips that accompany the issue, please visit www.MRC.org.

Today’s installment: The liberal media and communism. Probably the most sickening display of pro-communist propaganda to air on an American network was the seven-hour series ‘Portrait of the Soviet Union,’ produced by (you guessed it) Ted Turner. It aired back in March 1988 on Turner’s TBS, and was narrated by ‘Jaws’ actor Roy Scheider. Here are a few excerpts from the first night’s installment:

“The Soviet Union, draped in history, born of bloody revolution, bound together by a dream that is still being dreamt. It is the dream of a socialist nation marching towards the first communist state. The Soviet Union, a mighty union.”
“Once, the Kremlin was the home of czars. Today, it belongs to the people.”
“Atheist though the state may be, freedom to worship as you please is enshrined in the Soviet constitution.”

Some of the other quotes that show the liberal media’s soft spot for totalitarian dictators:

“Few tears will be shed over the demise of the East German army, but what about East Germany’s eighty symphony orchestras, bound to lose some subsidies? Or the whole East German system, which covered everyone in a security blanket from day care to health care, from housing to education? Some people are beginning to express, if ever so slightly, nostalgia for that Berlin Wall.”
— CBS’s Bob Simon, March 16, 1990 Evening News.

“[Fidel] Castro has delivered the most to those who had the least....Education was once available to the rich and the well-connected. It is now free to all....Medical care was once for the privileged few. Today it is available to every Cuban and it is free....Health and education are the revolution’s great success stories.”
— Peter Jennings, ABC’s World News Tonight, April 3, 1989.

“Frankly, to be a poor child in Cuba may in many instances be better than being a poor child in Miami, and I’m not going to condemn their lifestyle so gratuitously.”
— Eleanor Clift on The McLaughlin Group, April 8, 2000.

“For Castro, freedom starts with education. And if literacy alone were the yardstick, Cuba would rank as one of the freest nations on Earth. The literacy rate is 96 percent.”
— Barbara Walters on ABC’s 20/20, October 11, 2002.