Former Vice President Joe Biden has become the presumptive Democratic candidate for the upcoming presidential election, but some far-left celebrities who support Bernie Sanders are unhappy with the likely nominee.

During the past week, actor John Cusack has called on the Massachusetts senator to “unsuspend his campaign immediately,” and actress Susan Sarandon has expressed support for Tara Reade, a former Biden staffer who has accused him of committing sexual assault on her during 1993.

According to an article posted on Tuesday by Fox News Channel reporter Tyler McCarthy, Cusack called on Sanders to reopen his campaign for president after the state of New York canceled its June 23 primary election due to concerns over the coronavirus pandemic. 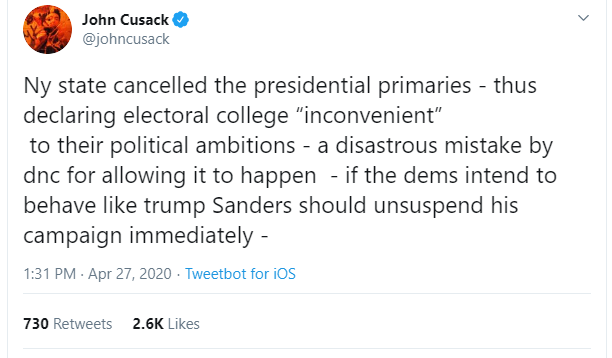 During his quick response to the news, the actor claimed that the decision has set “a precedent for Donald Trump to cancel the general election” on November 3 and stated that Sanders should “rescind his endorsement” of Biden.

In his first tweet, Cusack noted that the state board of elections was “declaring [the] electoral college ‘inconvenient’ to their political ambitious,” and it was “a disastrous mistake” by the Democratic National Committee “for allowing that to happen” while “behaving like Trump.”

A few days earlier, actress Susan Sarandon -- a longtime Sanders backer --, tweeted in support of Reade, whose mother apparently spoke by phone with the host of Larry King Live decades ago in a video containing potential corroborating evidence of a sexual assault claim against Biden. 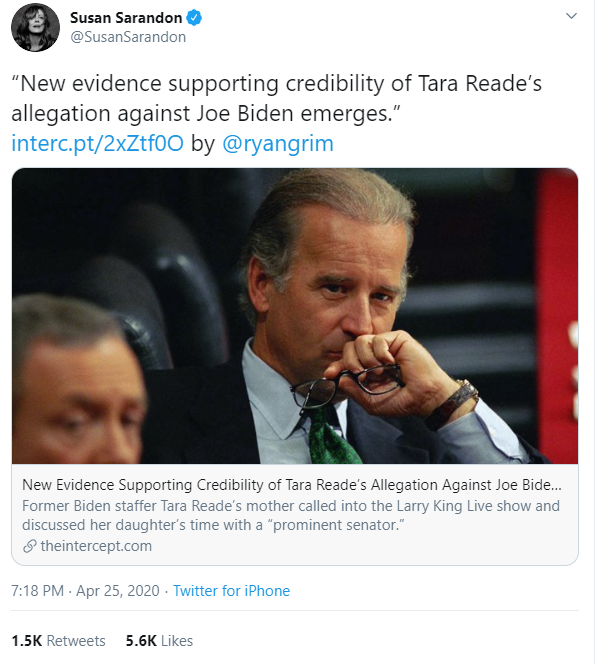 That article, which was written by fellow Fox News Channel reporter Brie Stimson, noted that Sarandon has joined “a growing number” of Sanders supporters who state that Biden is an "establishment" Democrat who “lacks a commitment to the progressive agenda” that the liberal senator espoused.

Meanwhile, many other supporters “have been disappointed by their candidate's decision to end his campaign and endorse Biden,” Stimson noted, and they have tweeted “that the former vice president is not worthy of the Democratic presidential nomination.”

The reporter also stated that Sarandon “has been a vocal Sanders surrogate at least since the 2016 campaign. She said in a 2017 interview she couldn’t bring herself to vote for Hillary Clinton in 2016 and has slammed Biden recently for not being progressive enough.” Reade, who “worked for Biden briefly in the early 1990s when he was a U.S. senator representing Delaware,” claimed last month he sexually assaulted her about the time of the video.