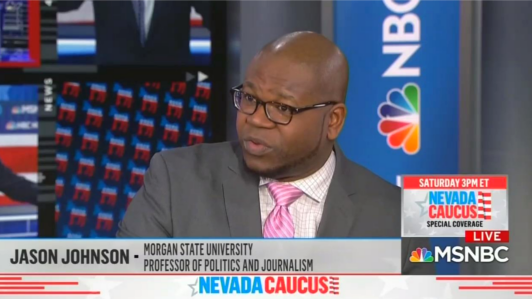 It takes a lot of effort for a black commentator to be removed -- even temporarily -- from the liberal MSNBC cable channel, but a magazine editor found himself in that situation after using racial terms to hammer African-American supporters of Bernie Sanders in this year’s presidential election.

The Daily Beast reported that Dr. Jason Johnson, a founder of The Root website, has been "benched" for loose talk about "racist white liberals" favoring Bernie Sanders and mocking supports on "the island of misfit black girls." (Apologies to Rudolph the Red-Nosed Reindeer.)

In recent months, Johnson—a fixture of the network’s Democratic primary analysis—has drawn considerable heat for his relentlessly anti-Sanders commentary on MSNBC, which has also come under fire from the left for its skeptical and largely negative coverage of the democratic-socialist senator....

Prior to his benching, he made nearly 40 appearances on the network in 2020 alone.

I do find it fascinating that racist liberal whites seem to love them some Bernie Sanders, consistently, and always have a problem with any person of color who doesn't want to follow with the orthodoxy of their “lord and savior,” Bernie Sanders.

The man cares nothing for intersectionality, and I don’t care how many people from the island of misfit black girls that you throw out to defend you on a regular basis.

It didn’t take long for Briahna Joy Gray, national press secretary for the Sanders campaign, to tweet: “I hope we can have political disputes without engaging in open racism and sexism. This misogynoir is disappointing, but not surprising from @DrJasonJohnson. I hope we can all encourage each other to be better.”

Johnson said he was angry about Sanders reaction to members of "Black Lives Matter" at a meeting in 2015, claiming he "told them that the reason that more black people are in jail is because they sell more drugs, I seem to remember things like that." (Sanders later claimed he "misspoke".)

Of course, this isn’t the first time this year Johnson has gotten into trouble on the liberal channel. On Thursday, January 30, Johnson went on a tirade and warned viewers that an acquittal of President Trump would embolden him to “shut down voting” across California in the 2020 election.

Then on February 19, Johnson and Morning Joe co-host Joe Scarborough compared President Trump to a “dictator” for exercising his constitutional right of granting pardons and commutations.