Ever since Donald Trump won the White House in November of 2016, the networks’ late-night “comedy” hosts have been offering non-stop, blistering attacks on Trump, acting as PR officials for the far-left.

That was certainly the case on Wednesday evening, when the host of ABC’s Jimmy Kimmel Live joked that other leaders across the world made fun of him at the NATO summit in London before claiming other people in attendance were “laughing at our ridiculous president” even though “that is our job.”

Kimmel began his monologue by telling the people in the audience: “You’ll be happy to know the President is back home in the White House after a doozy of a trip to the U.K.,” which “didn’t end on a happy note.” The liberal comedian claimed that “Trump cut the trip short after seeing a video in which a group of other world leaders who thought they were having a private conversation seemed to be talking about him behind his back.”

Kimmel then played part of a clip including audio of three leaders from the previous night at Buckingham Palace: Canadian Prime Minister Justin Trudeau, British Prime Minister Boris Johnson and French President Emmanuel Macron, who got together to “goof on His Majesty.” 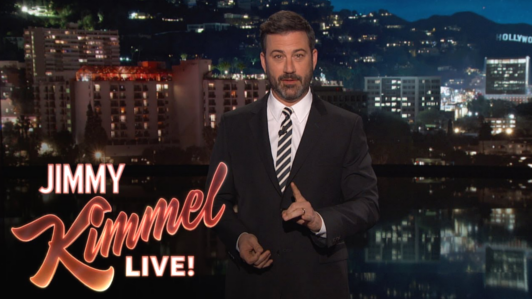 “This is absolutely unacceptable,” he stated. “How dare they laugh at our ridiculous president? That is our job!” The late-night host then played a brief clip in which a reporter later asked Trump about the video, and the GOP official replied that Trudeau is “two-faced.”

As you might expect, the comedian’s bashing of the President didn’t stop there:

Then, after Trump witnessed his colleagues poking fun at him, he had to pose with them for a group photo, and the mood was not merry and bright.

He took a spot next to his pal, President [Recep Tayyip] Erdoğan of Turkey. The strongmen are his only friends now.

Correct me if I’m wrong, but wasn’t Donald Trump the one who said the world is laughing at us, and he’s going to make it stop?

If only there was some record of him saying that.

At that point, Kimmel ran a collage of the President using that same phrase several times when referring to Barack Obama during the 2016 election, including one clip that superimposed a red clown nose on Trump’s face. Is it any wonder why the ratings for the networks’ late-night programs are crashing and burning, and are considered part of what Trump calls “fake news?”