Singer Rihanna: Trump Is the ‘Most Mentally Ill Human Being in America' 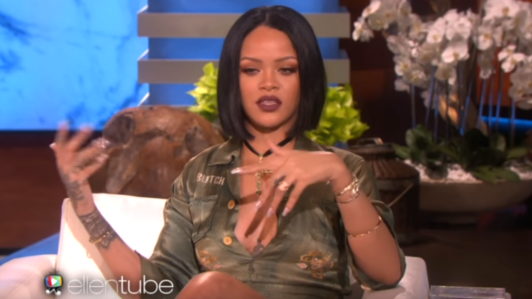 As is often the case with entertainers, actors, singers and other performers, many of those people believe that they somehow have a special insight into issues and conflicts that the average person does not share.

An excellent example of this concept came on Wednesday, when the singer Rihanna stated that President Trump seems to be “the most mentally ill human being in America right now.”

In a cover story written by contributor Abby Aguirre in the latest issue of Vogue magazine, the celeb didn’t hold back any venom toward the GOP occupant of the White House while responding to the mass shootings in El Paso and Dayton.

Aguirre asked Rihanna how she felt the day after the mass shootings, and the singer responded:

It is devastating. People are being murdered by war weapons that they legally purchase. This is just not normal. That should never, ever be normal.

And the fact that it’s classified as something different because of the color of their skin? It’s a slap in the face. It’s completely racist.

As if that reply wasn’t harsh enough, the entertainer added: “Put an Arab man with that same weapon in that same Walmart, and there is no way that Trump would sit there and address it publicly as a mental health problem.”

She continued that “the most mentally ill human being in America right now seems to be the president.”

The Vogue contributor also questioned Rihanna about a T-shirt produced by her fashion company that has the word “IMMIGRANT” in large letters across the back. With that in mind, Aguirre next asked what the singer would say “to young immigrant living through this time.” “What do you say?” the performer replied. “What can you say? It’s gonna get better?”

Next, Rihanna noted: “I almost feel sick to my stomach. I don’t even believe this is happening in real life. In front of my eyes. In front of the world. It’s not even hidden. This is blatant.”

In fact, a journalist tweeted last year that Rihanna’s “Don’t Stop the Music” was blaring at a Trump rally. She replied: “Not for much longer.” Aguirre also asked if the entertainer really turned down an offer to perform during the Super Bowl halftime show in solidarity with protester Colin Kaepernick.

“Absolutely,” she noted. “I couldn’t dare do that. For what? Who gains from that? Not my people. I just couldn’t be a sellout. I couldn’t be an enabler.”

It’s easy when you think everything is going really well and perfect, when everything is flowers and butterflies, and you’re in your own bubble and your own world.

But to see it, to know it’s happening -- it pushes you to want to be the light in the world.

Those comments sharply contradict what NewsBusters reported five years ago, when the performer released a seven-minute video that graphically depicted kidnapping, nudity, torture, vandalism, forced drug use, drowning and murder.