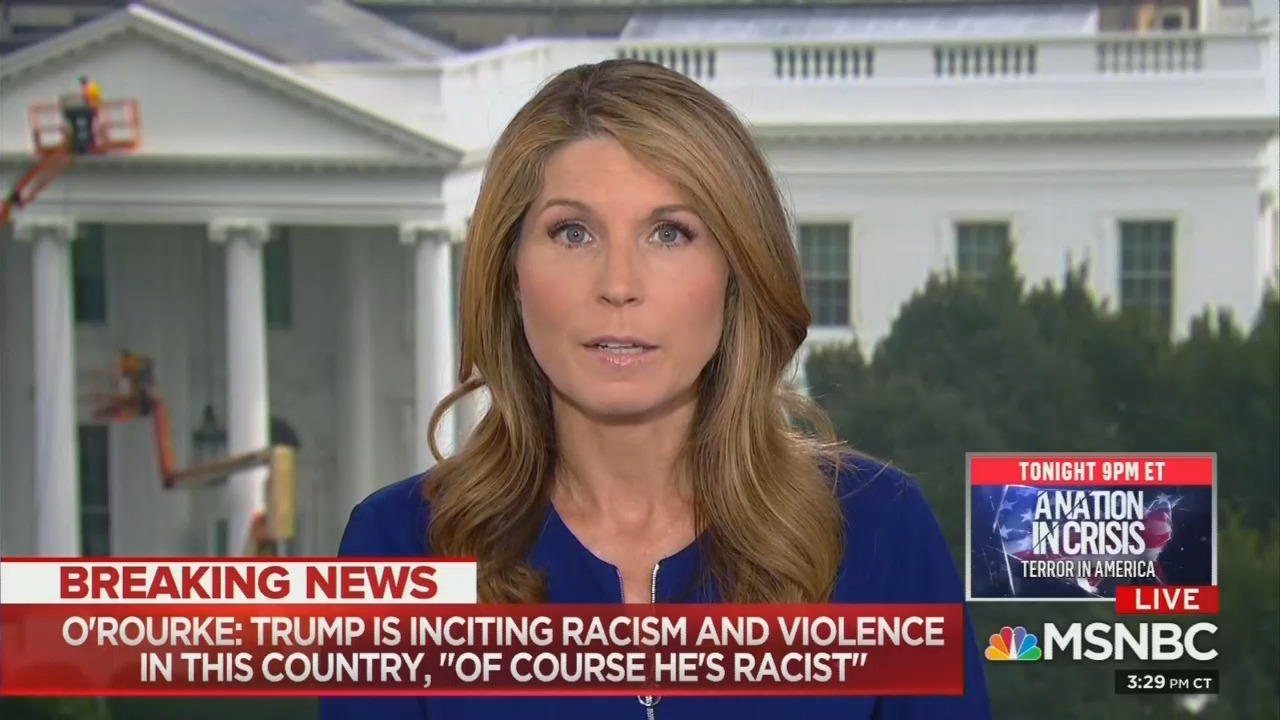 It got really ugly this past week as anchors, reporters, hosts and celebrities blamed Donald Trump’s “racist” rhetoric for the mass shootings in El Paso and Dayton.

When journalists weren’t blaming Trump’s words for inspiring white supremacists, they attacked gun owners. MSNBC’s Jacob Soboroff raged against the NRA: “When the NRA donates $30 million to the President’s campaign in 2016 he calls the National Rifle Association, ‘good American patriots.’ It is clear as day to me why this is happening and it should make all of us sick.”

Lefty celebrities got into the act as well. Bette Midler offered an anti-gun chant on Twitter: “Hey, hey #NRA! HOW MANY LIVES DID YOU TAKE TODAY??” After citing how much money Senate Majority Leader Mitch McConnell received from the NRA, CBS Late Show host Stephen Colbert snidely remarked: “Now look, you can’t put a price on a human life but that doesn’t stop Mitch from trying.” Author Stephen King was even more disgusting in his response to a McConnell tweet: “This is on you. You should be charged as an accomplice in these deaths.”

The following are just a few of the ugliest attacks on Trump, Republicans, conservatives and gun owners from journalists and celebrities in the wake of the El Paso and Dayton shootings:

“You now have a President, as you said, talking about exterminating Latinos.”
— Host Nicolle Wallace on MSNBC’s Deadline: White House, August 5.

“We’ve heard Beto O’Rourke say that the President’s rhetoric is fueling more hate in this country. The President has used, as you well know, words like invasion to talk about illegal immigrants....Isn’t this kind of rhetoric and especially in light of what we’ve just seen, isn’t it just dangerous?...What do you say to Americans who look at what happened in El Paso and say that the President’s rhetoric is in part to blame?”
— Substitute host Jonathan Karl’s questions to White House Chief of Staff Mike Mulvaney on ABC’s This Week With George Stephanopoulos, August 4.

“How will [President Trump] respond to those claims that he is to blame for what happened in El Paso? Given what we know about the shooter’s motive, given the almost identical language that the gunman used in talking about the crisis at the border with regard to illegal immigration.”
— CBS White House correspondent Wiejia Jiang during live coverage of President Trump’s speech from the White House on August 5.

Co-host Dan Harris: “Is it fair, Jon, to tie the President to this violence?”
Chief White House correspondent Jonathan Karl: “Dan, whether or not it’s fair, he’s going to have to answer those questions. The bottom line is this President has had rhetoric on immigration and on immigrants that has been deeply divisive. And this is going to be something that he is going to have to answer for.”
— ABC’s Good Morning America, August 4.

This Is What Trump Wants

“Isn’t it okay to deduce that at this point this is what he wants?....I mean, this is a President who seems to want these things to happen. How else can this be explained?”
— Co-host Mika Brzezinski discussing mass shootings as aired on MSNBC’s Morning Joe, August 6.

“You have spent the last several years lying and covering up for this President and trying to pretend he’s not a white supremacist. And that goes for you, CEOs, who allow your companies to continue to write checks, to support the political rise of this white supremacist President.”
— Co-host Joe Scarborough on MSNBC’s Morning Joe, August 5.

Trump’s Cultivation of Hate and Racism

“The ideology that can inspire some to mass murder is taking inspiration from the President. We went to a neo-Nazi festival in Germany a few weeks ago. But what surprised us most is what organizers were handing out at the door. So, they’re giving out hats. M-G-H-A, make Germany hate again.”
— NBC chief foreign correspondent Richard Engel on NBC Nightly News, August 5.

“Even before the mass murders this weekend, even before this white supremacist committed what is being treated as an act of domestic terrorism, it has been clear from the first moment that Donald Trump came down that escalator four years ago, and particularly clear in the last few weeks as Donald Trump stood idly by as a crowd at his rally chanted ‘send her back,’ the President’s cultivation of racist ideology and his racist definition of what the U.S. is for, pose an existential threat to what the country’s nature should be.”
— Host Chris Hayes on MSNBC’s All In, August 5.

“People say, ‘well, I’m not sure President Trump is racist.’ But racist is as racist does.”
— Former CBS Evening News host Dan Rather on CNN Tonight with Don Lemon, August 5.

Trump Is “Manifestation of the Ugliness” In Us All

“The thing that I just don’t understand is why we continue to have people today ask why or how did this happen? The President of the United States has never hid his racism....This is the president that called immigrants rapists and criminals....Talked about infestations and invasions.....When the NRA donates $30 million to the President’s campaign in 2016 he calls the National Rifle Association, ‘good American patriots.’ It is clear as day to me why this is happening and it should make all of us sick. It is obvious and it is right in front of our faces.”
— Correspondent Jacob Soboroff MSNBC’s Kasie DC, August 4.

“Look, we’re in hunting areas, you know, if you want to shoot a deer, that’s fine. But you don’t need an AR-whatever.”
— Co-host Sheinelle Jones on NBC’s Today, August 6.

“I don’t see sides to the issue of doing more or doing better than we’re doing now when it comes to gun violence, but there are things that are obvious...For one, we can’t continue to be this stupid. It just defies common sense.”
— CNN host Chris Cuomo moderating CNN’s town hall on mass shootings, August 7.

Republicans Profit Off the “Slaughter” of “First Graders”

“We don’t value people; we worship guns. It’s who we are. Republicans don’t value people; they worship the blood money the NRA pours into their campaign coffers. If the slaughter of 20 first-graders couldn’t change that, nothing will. Get used to it....As long as Republicans hold any power, the slaughter will continue....You want carnage? You got it under Trump, whose white nationalist acolytes are using our gun-in-every-pot laws to maim and kill as many people who don’t look like them as possible.”
— August 5 Boston Globe “Fast Forward” daily e-mail newsletter sent out by staffer Teresa Hanafin.

Trump Is Hitler, It’s In the Numbers

“The President said that we will fly our flags at half-mast until August 8th. That’s 8/8. Now, I’m not going to imply that he did this deliberately but I am using it as an example of the ignorance of the adversary that’s being demonstrated by the White House. The numbers ‘88’ are very significant in neo-Nazi and white supremacy movement. Why? Because the letter ‘H’ is the eighth letter of the alphabet and, to them, the numbers ‘88’ together stand for ‘Heil Hitler.’ So, we’re going to be raising the flag back up at dusk on 8/8.”
— MSNBC contributor Frank Figliuzzi on MSNBC’s 11th Hour With Brian Williams, August 5. 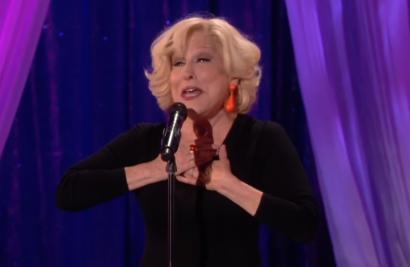 “THESE ARE THE PEOPLE WHO ALLOW US TO BE KILLED EVERY SINGLE DAY. THEY ARE SHILLING FOR THE NRA. KEEP THIS LIST AND WORK TO UNLOAD THEM!”
— August 4 tweet by singer/actress Bette Midler, accompanied by list of Republican senators who have received donations from the NRA.

“I think that this point it’s clear that America’s gun culture is melting down, but the Republicans in Congress would rather maintain their power than save lives....McConnell’s had these two bills since February but he won’t take any action. I’m sure he has his reasons. Like the 1.26 million dollars in NRA contributions he has received. Now look, you can’t put a price on a human life but that doesn’t stop Mitch from trying.”
— Host Stephen Colbert on CBS’s The Late Show, August 5.

“This is on you. You should be charged as an accomplice in these deaths.”
— August 3 tweet by author Stephen King in response to Sen. Mitch McConnell tweet offering prayers for victims of El Paso shooting.

“For a man who clearly loves being well-liked, it’s indescribably mind-numbing to see him blatantly and murderously ignore doing ONE THING that would not only make people happy but would SAVE PEOPLE’S LIVES. True leaders don’t stand back and watch the world burn. @realDonaldTrump.”
— August 5 tweet by country music singer Kacey Musgraves.

“Let me be clear - I’m from Texas. I grew up around hunting and guns. There’s a time and place for that and even self protection in ways..but this is different. The system is majorly flawed and NOBODY NEEDS ANYTHING REMOTELY AUTOMATIC. PERIOD. They’re mass killing machines.”
— August 5 tweet by country music singer Kacey Musgraves.