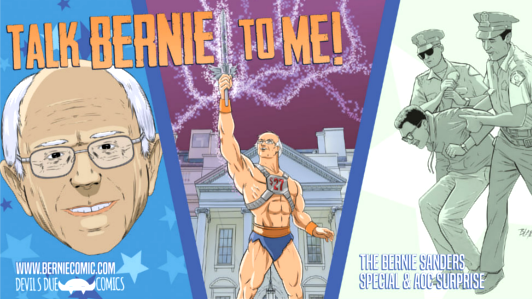 As if we don’t see 2020 presidential candidate Bernie Sanders often enough, a comic book company has decided to produce a one-shot singing the praises of the Independent Vermont senator with the curious title Talk Bernie to Me!

The issue will feature three covers, with one of Sanders’ smiling face, another with him as He-Man from the Masters of the Universe animated series holding up a sword in front of the White House and a third depicting his arrest during a protest many years ago.

In addition, Sanders -- who is described in the Devil’s Due company’s press release as “one of the front-runners” in the Democratic Party’s primary election -- will wear a chest plate with “$27” on it to represent the average individual donation to his political campaigns.

While depicting the candidate “as a full-fledged superhero,” the issue is referred to as “a comic book anthology for the 99 percent” of wage-earners in the country and “will be chock full of short-form Bernie comics, Trump and GOP skewering, plus satirical games and puzzles.”

In an effort to promote higher sales, the issue will also contain an “AOC Surprise” as a follow-up to the comic giving similar treatment to the socialist Congresswoman from New York. That one-shot is set to be released on May 15 under the title Alexandria Ocasio-Cortez and the Freshman Force.

When making the announcement, Devil’s Due publisher Josh Blaylock stated: “I've been increasingly impressed with Sanders' ingenuity and ability to be on the right side of history -- even when it’s not the popular thing to do.”

Blaylock also pointed to the senator’s “fights for civil rights and health care many decades ago” and the recent introduction of a bill to force large employers to pay for government benefits their employees receive, as well as legislation that would force employee raises at Walmart and other “large, profitable corporations that pay poverty-level wages.”

According to its website, the title will feature “some of the industry’s best and brightest, all of whom have felt the bern!”

The site describes the comic as a collection of “stories about and inspired by presidential hopeful Bernie Sanders and the movement he has inspired, with a bonus back-up and flip cover featuring Congresswoman AOC, picking up where her one-shot left off in May!”

The people at Devil’s Due also went out of their way to list people who would not be taking part in the project, including Amazon founder Jeff Bezos, Koch brothers Charles and David, billionaire bank CEO Jamie Dimon, business magnate John D. Rockefeller or Ebenezer Scrooge.

Ten retailer variants are planned, and Devil’s Due will overprint a modest amount. “I want to reward the people that ordered it up front,” Blaylock explained.

Part of the proceeds from the comic will be donated to the ACLU and RaicesTexas.org, which provides legal services to “under-served immigrant children, families and refugees,” he stated.

As NewsBusters chronicled in February, this year isn’t the first time Devil’s Due has combined comic books and politics.

In 2009, the company produced a mini-series entitled Barack the Barbarian that was named after the Democrat president, that probably sold more copies than the upcoming AOC one-shot, which Blaylock asserted was “the most talked-about comic in the world, at least in April.”

It also comes as no surprise that the comic is slated be released on Wednesday, July 3, the day before Independence Day, which is about as patriotic as many people in the media ever get.