Even though CNN’s slogan these days is “Facts First,” the liberal network apparently doesn’t check all the facts about its national security “experts” and their connections to Qatar, a terror-funding Islamist nation in western Asia.

As a result, viewers may be unaware of the analysts’ financial and institutional links to that country in the Middle East. Those relationships often extend beyond their on-air appearances and raise the possibility of conflict of interest when discussing such countries as Israel, Saudi Arabia and the United Arab Emirates.

According to an article written by Jordan Schachtel, national security correspondent for the Conservative Review and editor of The Dossier for Blaze Media, none of these CNN regulars disclose their ties to Qatar while “going to bat” against the country’s rivals and “never mentioning that their editorial freedom is restricted or that they are personally compromised.”

Schachtel then pointed to four “regulars” who “double as Qatar-tied propagandists,” but “you would never know it if you only watched CNN” because “several of the so-called national security experts … that you see on television every night represent a nation that has placed itself on the warpath against America’s most important regional allies.”

The first person on the list was Ali Soufan, a regular guest “who frequently rails against the Saudis, Qatar’s top rival, for the killing of Jamal Khashoggi.”

Schachtel also quoted the Wall Street Journal as stating that Soufan has a “personal relationship” with the leaders of the country since he is executive director of the Qatar International Academy for Security Studies (QIASS), which is funded by that nation’s regime.

Mehdi Hasan was next since she has been a longtime presenter for Al Jazeera, “the powerful state media entity that was the favorite network of deceased al Qaeda chief Osama bin Laden.” As such, Hassan “advances the interests of the state and its royal family.”

She and her employer generate “a steady stream of pro-Islamist, anti-Semitic propaganda. As a state-controlled institution, its founding and continuing purpose is the advancement of Qatar’s national interests.”

“When he speaks, he’s no less a government spokesman than Kellyanne Conway or Sarah Sanders,” explained David Reaboi of the Security Studies Group in a column last week.

“But the government he represents -- to millions of unsuspecting American viewers -- has long promoted the Muslim Brotherhood, funds the bloodthirsty designated terror group Hamas, has helped al Qaeda and the Taliban fundraise and is relentlessly hostile to American interests,” Reaboi continued. 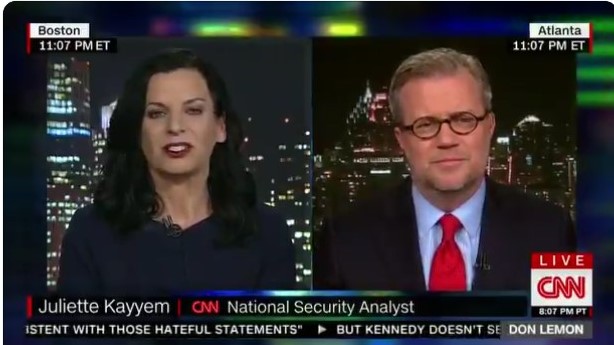 Schachtel then turned his attention to Juliette Kayyem, who “regularly takes to the airwaves to bash Qatar’s rivals and has transformed her social media accounts into a one-stop shop for anti-Saudi Arabia talking points.”

According to her online biography, Kayyem “has spent over 15 years managing complex policy initiatives and organizing government responses to major crises in both state and federal government.”

“Previously,” the bio noted, she “was President Obama’s assistant secretary for Intergovernmental Affairs at the Department of Homeland Security,” where she played “a pivotal role in major operations including handling the H1N1 pandemic and the BP oil spill.”

Amber Athey at the Daily Caller reported CNN's own biography explained Kayyem was a “board member of … the International Centre for Sport Security,” which Qatar's government used to support its World Cup soccer initiatives. A CNN source told Athey that Kayyem left the board in 2015, but instead of revising her biography to explain that, they simply removed any reference to her Qatari ties.

The last name on the list is Peter Bergen, a lead CNN national security analyst who “does not appear to have a direct link to a Qatari state institution. However, Bergen -- a regular visitor to the tiny, energy-rich nation -- pushes blatant pro-Qatar agitprop when it comes to Middle East affairs.”

Also, “Bergen’s bio states that he is a professor of practice at Arizona State University, which has the largest number of Qatari students at any U.S. university, many of whom are sponsored by Qatari state institutions, including its defense ministry.” In addition, “Arizona State is among the top recipients of Qatari funding to U.S. universities,” he concluded.