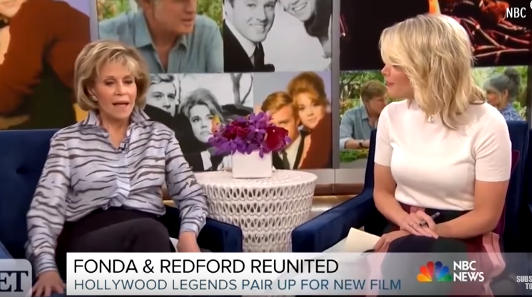 Megyn Kelly marked her first year as host of her eponymous weekday NBC program by pointing to her only regret: “I certainly wish I hadn’t put on Jane Fonda! That didn’t go well!”

The anchor of NBC’s Megyn Kelly Today morning series was referring to an interview she did with the liberal activist that took place during September of 2017, when she asked “Hanoi Jane” about her history of having cosmetic surgery.

According to an article by Brody Brown, managing editor of the US Weekly magazine, Kelly is not backing down even though that “infamous exchange” took place “a little over a year ago, but the morning show host’s feelings on the matter haven’t dulled one bit.”

Brown added: “Despite Fonda’s displeasure with Kelly questioning her about plastic surgery, she said that she wouldn’t have done anything differently.”

She then stated that Fonda “has answered that question in about 40 different forums. … It was nothing wrong with me. And she’s answered it in 40 more forums since!”

Instead, Brown noted, “Kelly believes Fonda’s larger issue had to do with the host’s career past as host on the Fox News Channel’s The Kelly File.”

I think the issue was somebody who used to work at Fox News was asking it of her that particular day. There’s nothing I can do about that.

Fonda’s poor impression of Kelly was evident when the actress (who starred in the 1968 science-fiction and fantasy film Barbarella) addressed the exchange in later interviews and also went on to attack Kelly’s journalism skills.

When comedian Lily Tomlin later joked about Fonda’s “first face-lift,” the actress quickly shot back: “Who are you? Megyn Kelly!?”

However, the former Fox News host added that a more pressing issue was at play. “My feeling on that one was, not everything is about getting a rating or getting another guest booking. … Some things are about standing up for yourself.”

As NewsBusters previously reported, the hosts on ABC’s The View program also criticized Kelly’s handling of that interview.

After stating that Fonda -- who is also known for her anti-American activism during the Vietnam War in the 1960s -- “bristled at being asked about her plastic surgery,” the women said Kelly should “lighten up” since Fonda “made a mistake” when choosing to undergo those medical procedures.

Since moving from the Fox News Channel to NBC, Kelly has also had her share of controversies.

In mid-February, she followed the shooting at a Florida high school by demanding more gun control, blasting Second Amendment advocates and labeling politicians who oppose such regulations as cowardly and “weak” while the NRA is “too powerful.”

Kelly compared First Lady Melania Trump to the adult film actress and claimed that the president’s wife “sold her body for sexual exploitation” when she once posed nude for GQ magazine 18 years ago.

On the other hand, Kelly hammered Democrats in late September for politicizing the accusations against Supreme Court nominee Brett Kavanaugh and using the #MeToo movement to try to convict him before a Senate hearing had even taken place.

Apparently, the former Fox News Channel host is still working on being "fair and balanced" even though she's now an anchor for NBC. Here's hoping she can do more of that during her second year on weekday mornings.