Jim Carrey: ‘Half the Country’ Is ‘Cheering the Locomotive’ That Will Run Them Down 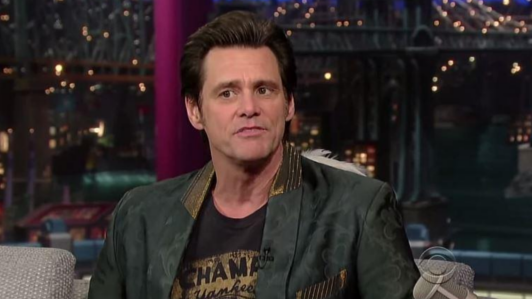 During his decades-long career, Jim Carrey has gone from being a popular comedian and movie star to a rabid liberal who thinks "half the country" is "cheering the locomotive” that will kill them. He has diverted his creative energy into the political arena to bash his favorite target: President Donald Trump, as well as other people in the Republican Party.

Most of the 56-year-old performer’s travels have been documented in an article by The Hollywood Reporter's Lacy Rose.

She began by noting:

The Jim Carrey that everyone else in Hollywood remembers is the guy who was first to command $20 million a picture -- the one who shot like a meteor from his weekly TV showcase on Fox's In Living Color to box office stardom with a string of hits (Ace Ventura, The Mask, Dumb and Dumber) in quick succession.

“The industry never tired of writing that guy huge checks,” she explained. ”It was Carrey who got tired of cashing them” since he already had enough money to live comfortably.

“[J]ust as he was feeling ready to be seen again, the Showtime dramedy Kidding came along, and with it, the opportunity to play Jeff Pickles, a Mister Rogers-style kids’ TV icon who's struggling to maintain his gentle, wholesome public persona” even as his private life falls apart when the show debuts on September 9.

"I just didn't want to be in the business anymore," Carrey stated. “I didn't like what was happening, the corporations taking over and all that. And maybe it's because I felt pulled toward a different type of creative outlet and I really liked the control of painting.”

Ever since the 2016 election, Carrey's been developing his skills as a political cartoonist, too, delighting his nearly 18 million Twitter followers with devastating lampoons of all things Donald Trump.

Sitting at home with a sketch pad and a bucket of acrylic markers turned out to be the perfect antidote to show business; and though his work has yet to yield a response from the president or the “sociopaths” in his White House, it has thrust Carrey back into the public eye in a way that's rejuvenated him.

Just hours after Carrey put “the finishing touches on his latest Trump-skewering sketch,” the drawing of the president’s ex-lawyer, Michael Cohen, racked up more than 800 retweets.

“His social media output now is almost exclusively made up of his political art,” Rose added..”He often finds himself drawing late into the night, after he's worked himself up binging on cable news” since MSNBC is his preferred channel, Rachel Maddow his preferred host.

“I try to avoid Hillary [Clinton]'s fund-raising parties up in the hills around me,” he continued. “That kind of world doesn't appeal to me, but I'm gonna be supporting the local guys here and making sure that [House Majority Leader] Kevin McCarthy doesn't get back in.”

“I'd like to get [Congressman] Devin Nunes out of there forever,” Carrey added. “Trey Gowdy and Jim Jordan? … It's just the worst of us encouraging the worst in us."

To watch half the country ignore what is quite obviously right in front of them, I liken it to standing on the railroad tracks cheering for the locomotive that's about to run you down.

“Look at it, look how beautiful it is. Man, it's really fast. It's getting here quickly.”

“When it's all said and done,” Carrey noted, “and the Feds finally close in and he hands over the keys to Trump Tower and Mar-a-Lago and whatever else he has, there's going to be a celebration in this country such as has never been seen before. I guarantee it."

It’s a shame when a comedian who can make so many people laugh decides to cut that audience in half, to those in just one political party. Here’s hoping he goes back to basics -- and soon.