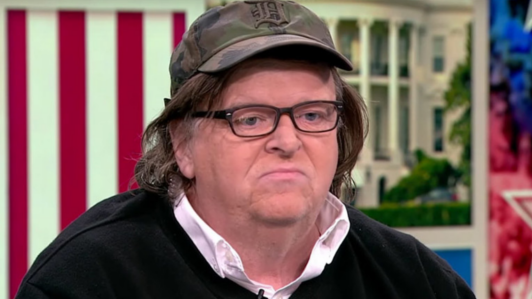 Just when it seemed that Michael Moore had finally left the national stage for good, the liberal filmmaker and activist took advantage of comments made this week by comedian Roseanne Barr and President Donald Trump to place the public spotlight squarely back on himself.

In a Twitter message posted on Wednesday, Moore stated: “I know Roseanne. And I know Trump. And they are about to rue the day they knew me … .”

As NewsBusters previously reported, Barr made a series of racist postings on Tuesday that cost her the updated prime-time situation comedy on ABC, and Trump responded that ABC should apologize to him for “the HORRIBLE statements made and said about me” on that network.

According to an article by Julia Conley, a staff writer for the Common Dreams website, Moore used the opportunity to tease “an upcoming documentary focusing on the president and the comedian.”

The liberal activist also shared a video from an appearance by him and Trump during an episode of The Roseanne Show on November 19, 1988, when Barr introduced Moore as “the philosophical polar opposite of Donald Trump” and touted “my blue-collar panelist” and his 1989 documentary entitled Roger & Me.

“He’s terrific,” Trump said of his fellow guest. “I love what he did. If I was Roger, I wouldn’t have liked it, but I enjoyed it.”

“I hope he never does one on me,” the future president stated to laughter from the studio audience.

Also on Wednesday, Moore noted that Barr “went on a Wild White Racist tear during the Obama years." He continued with a cryptic teaser for his upcoming film and a message about Trump's potential exit from the White House.”

Did you ever wonder why, in 2011, NBC didn't fire Donald Trump when he launched his racist birther movement, declaring the president a Kenyan and a Muslim?

Roseanne, the viscous [sic] slur at me you retweeted yesterday -- if I had the time, I'd sue you and drain you of every dime you have. But I've got a better idea. As they say in the movies: "one down, one to go."

NewsBusters also reported that in early October, the liberal activist told anchor Amy Goodman of the Democracy Now! program: “We have got to get rid of Trump.” Moore also asserted that in case of war with North Korea, his only goal was to “get rid of” the GOP occupant of the White House.

“Don’t even stop to think,” he continued. “If Trump is taking us to war, you have to automatically assume this is an insane idea from an insane man, it’s a lie we’re being told.”

Two months later, Moore clashed with Harvey Weinstein when the filmmaker wanted to take a sequel to his Fahrenheit 9/11 film in “a different direction,” but the Hollywood mogul wouldn’t let the liberal activist take the movie to another company.

Then in late January, Moore told a crowd at a memorial service for Dan Talbot, a programmer for the now-defunct Lincoln Plaza Cinemas, that “capitalism killed this cinema -- this evil, greedy, 20th century form of capitalism.”

“It is a fact that New York City gave us Donald Trump,” he said. “It’s the city that gave us Rush Limbaugh. It gave us the Buckleys …  . You understand though that each time we let another thing like this happen, they become empowered. It’s like in horror films when the beast gets fed another morsel and it becomes stronger and stronger.”

Then on January 29, during an event billed as the “People’s State of the Union,” Moore stated that the country “must remove and replace the system and the culture that gave us Trump in the first place.”

As if that comment wasn’t bizarre enough, the liberal activist told his listeners to “stop worrying” about Vice President Mike Pence.

Judging from the decreasing amounts of money his documentaries have made over the past several years, Moore surely needs to find something to draw his fellow liberals back to the theaters, and he hopes that hatred for Barr and Trump will do just that.