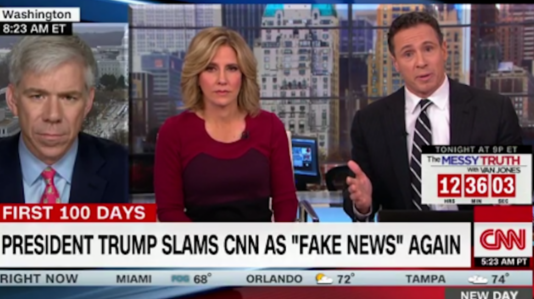 During Thursday morning's edition of the New Day program on the Cable News Network, co-host Chris Cuomo responded to a tweet from President Donald Trump that accused him of producing “fake news” by declaring that is “the worst thing you can call a journalist.”

“It's like an ethnic disparagement,” Cuomo stated. “We all have ugly words for people, and that's the one for journalists.”

Cuomo and fellow co-host Alisyn Camerota began the discussion by stating they had a “Tweet Alert” and referred to the Twitter post from President Donald Trump that read:

Chris Cuomo, in his interview with Sen. Blumenthal, never asked him about his long-term lie about his brave "service" in Vietnam. FAKE NEWS!

The Democrat from Connecticut had said on Wednesday that Gorsuch found Trump’s criticism of another federal judge “disheartening” and “demoralizing.”

Trump reacted to the interview by claiming Cuomo never mentioned the controversy during Blumenthal’s 2010 Senate campaign when he falsely said he had served in Vietnam.

The CNN co-host then replayed the start of the interview, when he noted that the president said: “You should not be believed because you misrepresented your military record in the past.”

Blumenthal responded by quoting Gorsuch, a tactic Cuomo described as “ducking the question,” which is “OK; politicians duck such things all the time.”

The co-host then stated that was the “first point that I made in the interview” before claiming:

The president, with all due respect, is once again off on the facts. And that’s not something that any of us have any desire to say on a regular basis, but it keeps being true.

“Fake News” is the worst thing that you can call a journalist. It’s like an ethnic disparagement. You know, we all have these ugly words for people, and that’s the one for journalists.

“He just keeps doubling down when the facts don't favor his position,” Cuomo continued.

“The truth of the matter asserted is about whether or not this judge says what Blumenthal says he said,” the CNN co-host added. “His own comms guy says it, nobody denies it except the president of the United States, and once again he doubles down when he’s wrong.”

Cuomo later tweeted that “this is silly.” I “appreciate POTUS [President Of The United States] watching New Day,” but it was “untrue” that Blumenthal was “not confronted” about his “war record.”

The co-host also asserted that the term “fake news” has changed into meaning “I don’t like this fact."

However, the CNN co-host then tweeted an apology for his previous conduct:

I was wrong. Calling a journalist fake -- nothing compared to the pain of a racial slur. I should not have said it. I apologize.

As NewsBusters previously reported, this is far from the first time Cuomo has clashed with President Donald Trump and members of the Republican official's team.

Even before the presidential election took place on November 8, 2016, the co-anchor joined other CNN personnel in hyperventilating after playing a clip of a Donald Trump rally where the crowd began chanting “CNN sucks” repeatedly.

A few weeks later, he pressed Trump advisor Kellyanne Conway over Trump's recent tweets criticizing Saturday Night Live's biased portrayal of him, along with the cast members of the play Hamilton recently confronting Vice President-elect Mike Pence at one of their shows.

Not long after Trump was inaugurated, Cuomo trumpeted liberal actor Kal Penn's online fundraiser for refugees and gave him a platform to attack the new president over his recent executive order on immigration, which he referred to as “Trump's tyranny.”

And on Thursday, the co-host joined his comrades at CNN to accuse Senate Majority Leader Mitch McConnell and his fellow Republicans of "sexism" for silencing Massachusetts Democratic Senator Elizabeth Warren during debate on the floor over confirming then-Attorney General nominee Alabama Senator Jeff Sessions, who was nevertheless sworn into office later that day.

Judging from Cuomo's attitude toward Trump and his administration, the CNN co-host is in for a long four years until the next presidential election -- and perhaps four more after that.